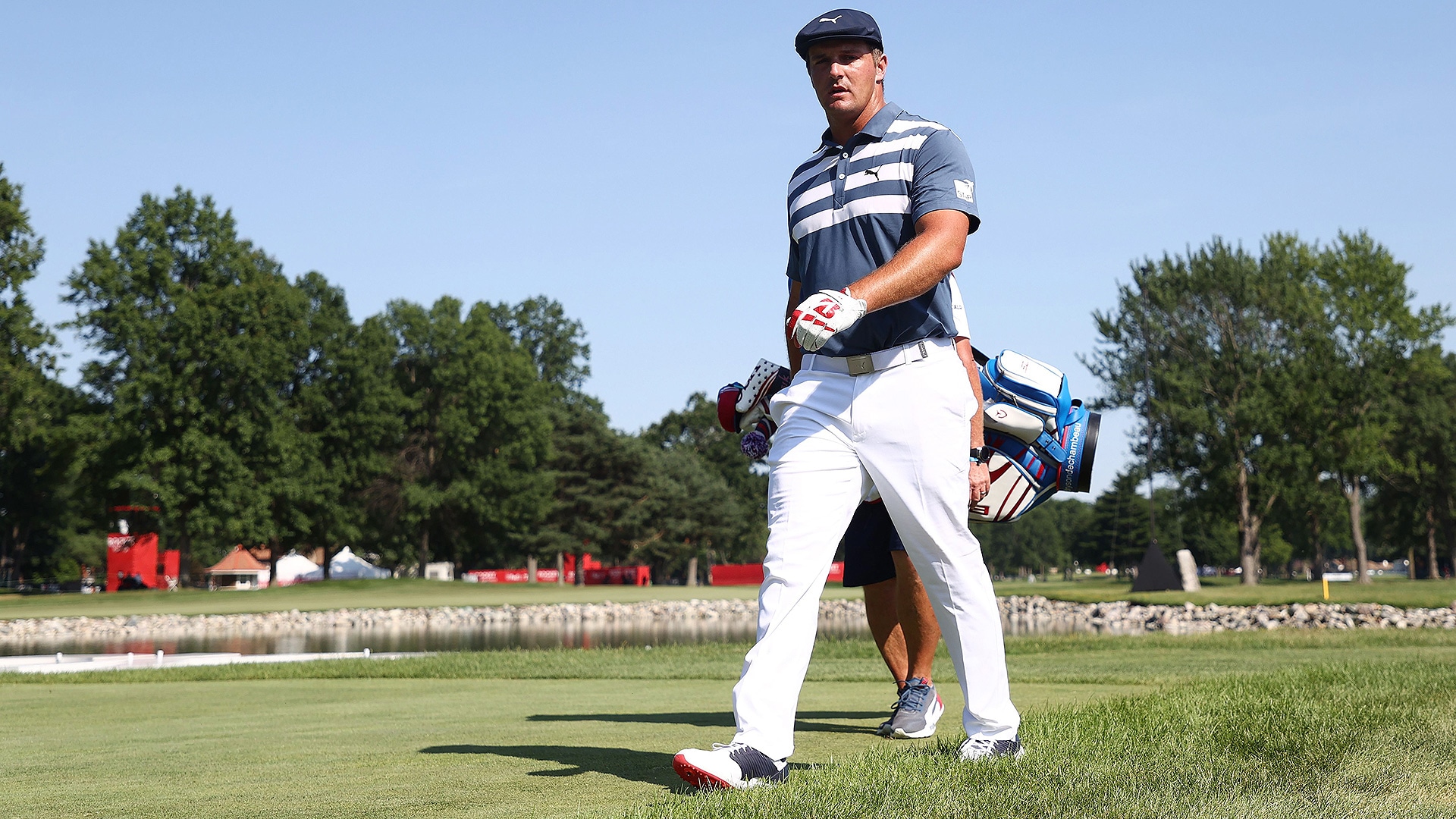 The new-look Bryson DeChambeau arrives, Matthew Wolff reemerges, Will Zalatoris moves a step closer to the PGA Tour, the Health and Safety Plan undergoes a few more changes and more in this week's edition of Monday Scramble:

1. Bryson DeChambeau powered his way to victory at the Rocket Mortgage Classic, winning by three shots after topping the field in driving distance.

TAKEAWAY: The Bryson Experiment is officially working, as the win in Detroit was his first Tour victory in 20 months and his seventh consecutive top-8 finish, spread out over six months, one pandemic and courses that are both accommodating and claustrophobic. It’s all happened at breathtaking speed, and Bryson the player should be viewed with nothing but respect and admiration.

There are countless cautionary tales of players who chased distance and destroyed their swings, but last fall DeChambeau committed to transforming his body and becoming one of the longest hitters in the game ... and he did it! With head-spinning success! His measured driving distance last week was 350.6 yards, the longest by a winner in the ShotLink era. He also led the field in putting. No one in the ShotLink era has ever led both categories en route to victory.

Has Bryson cracked the code? For most benign Tour courses, yes, probably. The Tour is in the entertainment business, and so week-to-week setups feature wide fairways, little rough and softer greens, especially in the heat of the summer, when they need water to stay alive. That’ll give beefy Bryson a massive advantage.

But it remains to be seen whether that bombs-away strategy will work at major tests, where his best career finish is a tie for 15th. We’ll get our first glimpse next month at TPC Harding Park. With juicy rough and firm greens, his super-powered game likely needs to be dialed back. Or so we think.

2. No one has played better during the restart than DeChambeau, who is a whopping 69 under par across the past four weeks – 20 strokes better than the next-best player.

TAKEAWAY: So overwhelming was DeChambeau in Detroit that he actually broke the ShotLink system – his drives were so long that when they finished within 30 yards of the green, it counted as an approach shot. As a result, his strokes-gained stats were wonky, and his proximity to the hole ranked last in the field.

Even if those numbers for the week weren’t accurate, it was obvious that DeChambeau still has room for improvement. Though he stuffed a few wedge shots, he oftentimes overshot his target or came up woefully short. His average second-shot distance on par 4s was 107.77 yards – and yet the result was in doubt until the final few holes.

That led to the familiar refrain: Boy, if he can figure out his distance control with his wedges, he’ll be unbeatable! 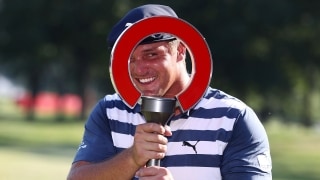 Sunday was a good day for Bryson DeChambeau, the player and the brand. And there will likely be many more as the game’s foremost innovator continues to hone his protein-infused craft.

But that’s ALWAYS been the case for long hitters – how can they slow down their bodies, use a different motion and add some finesse to what otherwise is a smash-mouth brand of golf. Tiger Woods was one of the longest on Tour and took his game to otherworldly levels once he became an elite wedge player. Dustin Johnson was one of the longest on Tour and finally made the leap to world No. 1 when he focused on his wedges. Improving short-iron play remains a point of emphasis for the current No. 1 player, Rory McIlroy.

So, yes, a player with Bryson’s length and putting will be difficult to beat if he can improve his stats from inside 150 yards. The way he’s hitting it, he doesn’t need to practice hybrids, long or mid-irons – he’ll only have to hit a few each round, into the par 5s.

But for whatever reason – most likely a combination of his one-plane swing and single-length irons – DeChambeau has always been below average in this area, at least compared to the other elite players.

From 125 to 150 yards, he’s steadily improved over the past three years but still ranks only 54th, averaging a proximity of 21 feet, 10 inches when he’s approaching the green with no more than a pitching wedge.

Aside from the validation of his hard work paying off, DeChambeau was pleased to see he could win on a course that required "unbelievable wedging" when it's "not one of the strong suits of my game."

Now that he’s weaponized his driver, his attention turns to his iron play and a “completely different motion.”

“I’ve got to be a lot more in control of it up to a higher level than even before,” he said. “That’s my next angle that I’m looking at, and hopefully I can accomplish that here in the near future.”

3. Asked about a testy exchange with an on-course cameraman whom he thought was following too closely, DeChambeau defended his actions by saying, “we need to start protecting our players out here compared to showing a potential vulnerability and hurting someone’s image.”

TAKEAWAY: Bryson’s actions weren’t all that troubling: Club slams or tosses can easily be explained away as the petulant acts of a frustrated perfectionist who got caught up while competing for history and legacy and millions of dollars. Even his 60-second confrontation with the cameraman deserves a pass; most pros would have had their caddie do their dirty work for them, but Bryson admirably decided to handle it himself.

But it’s what DeChambeau said afterward that proves the 26-year-old still has some growing up to do. He asked for the cameraman to “respect [his] privacy” when things weren’t going his way. The cameraman didn’t follow him into the port-a-potty. Or into the locker room. Or into the player parking lot. He followed DeChambeau OUT OF THE BUNKER, on the way to the green, just as he’d done for other players for the previous 43 holes.

Shooting guards don’t tell off cameramen after going 1-for-9 from the floor. Quarterbacks don’t hide from the cameras after throwing a second-quarter pick. Pitchers don’t take out the dugout cam after giving up a go-ahead run. It's the beauty of televised sports: If you’re in the arena – in this case, between the ropes – you’re fair game.

DeChambeau hasn't grasped that concept, at least not fully. From his NASCAR-style sponsor read or his 15-minute choreographed hype video, he's trying to craft a carefully cultivated image, when the irony is that he already has an easily identifiable brand.

4. Nearly a year to the day after his breakthrough win at the 3M Open, Matthew Wolff coughed up a 54-hole lead but nearly chased down DeChambeau on the back nine, ultimately finishing solo second.

TAKEAWAY: The runner-up finish was Wolff’s first top-10 since that 3M victory, and it’s been a year of growth for a player who, still just 21, should be entering his final year of college.

Though he might lack the weekly consistency of former classmates Collin Morikawa and Viktor Hovland, Wolff is the splashiest of the bunch and capable of going on a tear. His 31 par-breakers at Detroit Golf Club were the most by a non-winner on Tour since Paul Gow at the 2001 B.C. Open. Even without his best stuff on the front nine, Wolff seemed to relish the role of pursuer on the back nine and was an inch away from going 6 under on a six-hole stretch.

Now that he’s battled out of the first mini-slump of his career, Wolff can play with the freedom he’s accustomed to.

PGA Tour Next: Will Zalatoris. He's one of the young stars seemingly punished by the lack of PGA Tour promotions this year, but since the restart all he’s done is go T6-T3-4 and then pull out a win last week in Colorado to move to No. 1 in the points standings. Two more wins to earn an instant promotion ...

Flex of the Week: Bryson. On the 393-yard 13th hole Sunday, DeChambeau had the honor but let his playing partner, Troy Merritt, play first, because he wanted to wait for the green to clear. His tee ball flew into a tree and finished ... 78 yards short of the green.

Fun While It Lasted: Ho-Sung Choi. Remember this dude? Well, he was cruising right along at a Korean Professional Golf Tour event, in the final group, within a few shots of the lead, when he stepped up to the 18th tee ... and swung and missed. A total whiff. Hit a good foot behind the ball. With the driver. Srsly?

That’s What We’re Talkin’ About: Chase Koepka. In this space last week, we applauded the Travelers folks’ effort in extending an invitation to the younger Koepka for the 2021 event (after he pulled out of this year’s tournament, despite testing negative for COVID-19, to protect the field) but implored the upcoming events to take a look at him, because a year was a lifetime to wait for those without status. Well, the Tour added him to the field at this week’s Workday event at Muirfield Village, as a sponsor exemption. Here’s hoping he has a productive week.

More Tweaks: PGA Tour Health and Safety Plan. During what was a relatively quiet week on the COVID-19 front, at least on Tour, the circuit announced that any players who test positive for the virus but return two negative test results 24 hours apart will be allowed to return to competition immediately. That meant Cameron Champ, who tested positive at the Travelers but had three negative tests, was cleared to play and a last-minute add to the Rocket Mortgage field. Despite the late notice, he tied for 12th.

Welcome Home: U.S. Open on NBC. In a stunning move, the USGA announced that NBC has reacquired the rights from Fox Sports, effective immediately, and will carry (what is normally) the third major of the year until at least 2026. NBC now has the rights to both summer Opens. 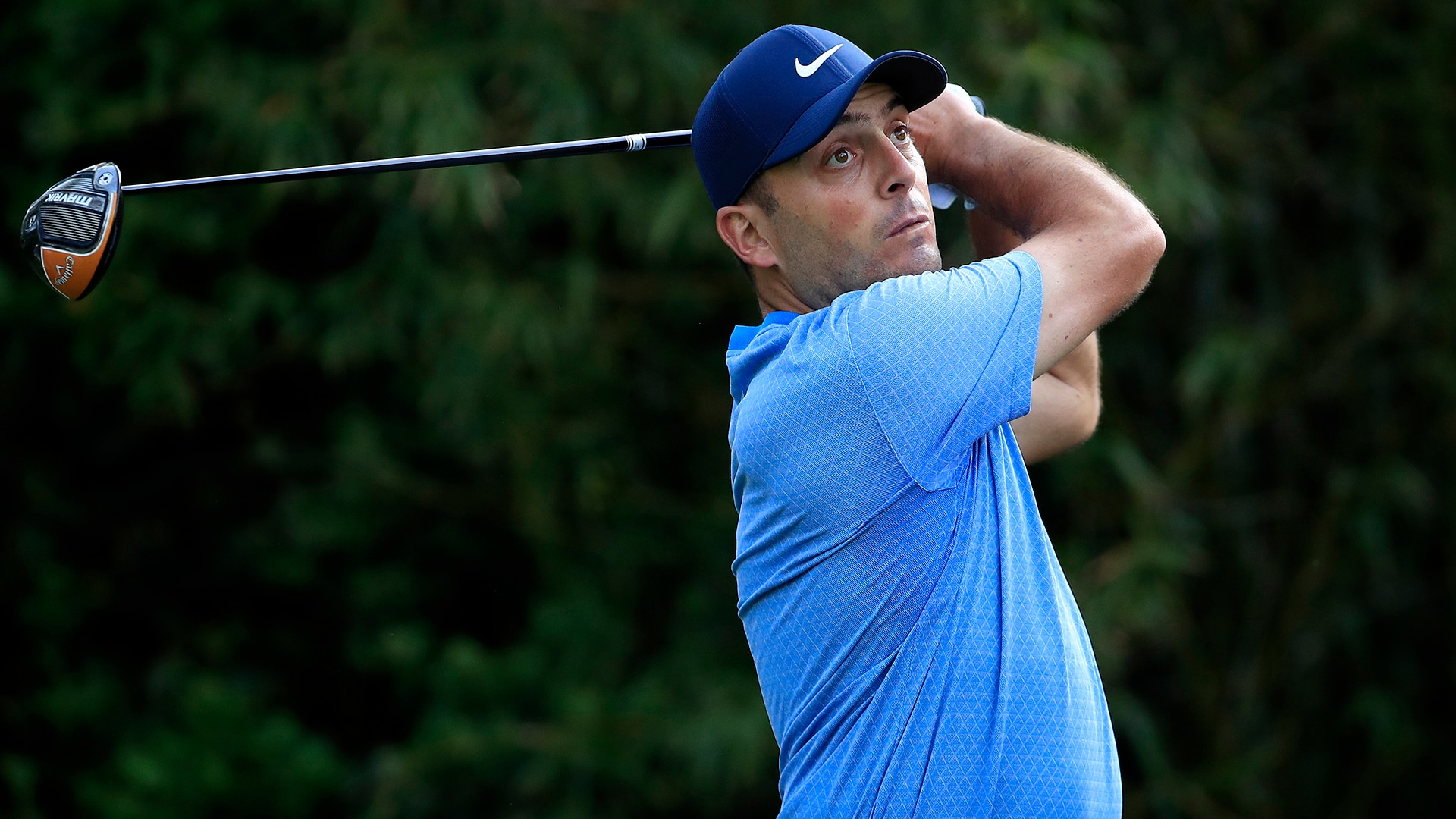 Welcome to the Best Coast: Francesco Molinari. The 2018 Open champ announced on Twitter that he’s moving his family from London to California, where, he said, “we hope to be safe, happy and to spend more time together as a family.” Even better news: He’ll be back in time for the PGA Championship, scheduled for Aug. 6-9 at TPC Harding Park in San Francisco.

So This Is Happening: Bryson. Any guesses who is now the favorite to win all three majors in 2020, at 10-1 odds, ahead of both Rory and Tiger? That’s right. Bryson.

Blown Fantasy Pick of the Week: Patrick Reed. Ranked seventh in the world, he’s been good if not great during the restart, with a pair of top-25s before heading to Detroit, where last year he placed T-5. Instead, he was sent packing after rounds of 70-72, which missed the cut by three. Sigh. 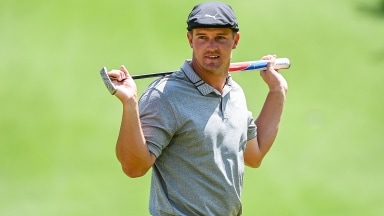 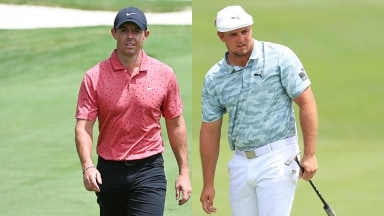