Hoffmann, who was diagnosed with facioscapulohumeral muscular dystrophy in 2016, returned to competitive play after a three-year lull at the RBC Heritage Classic in April and then played the Wells Fargo Championship, but missed both cuts. He's put on 20 pounds of muscle since then and at the Travelers Championship, he made the cut on the number (2 under).

"It's been an emotional roller-coaster ride, for sure," Hoffmann told GolfChannel.com after his round Friday. "A lot of a lot of hard work to get here."

It didn't come easy, though. He needed to get a few Tour rounds under his belt to feel comfortable once again.

"Forgot how the game feels so different, like every week, and it's just you just got to play the game and whatever you kind of have that week," he said. "You just gotta go with it and be as confident as possible. Like, the last two events I played, I was getting a cut, now and then a draw and it's got to be confident with it."

He hopes to ride that confidence toward regaining Tour status after this week, though the odds are against him.

Hoffmann, 32, needs a two-way T-2 or better to stay fully exempt on Tour for the rest of the season, or a solo fourth or better to keep conditional Tour status and play out of the Nos. 126-150 category.

He will still have partial Korn Ferry Tour status for 2022 because he finished better than No. 200 in the 2018 FedExCup standings.

Hoffmann, who moved to Costa Rica after his diagnosis and says made a recovery through non-western remedies, hopes to finish in the top 10 to claim a spot in next week's John Deere Classic.

If that doesn't happen, he hopes to receive a few sponsor exemptions this season. But beyond that, his future is unclear.

"I have no idea (what I'll do after this week)," he said. "[This week is] my last medical. So just gotta go low on the weekend. And see what happens." World No. 3 Henrik Stenson has a two-shot lead heading into the API finale. Here's what You Oughta Know about his chances. 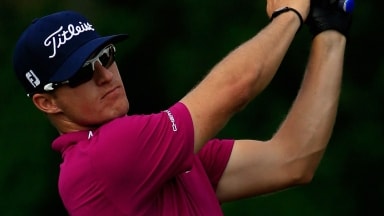 Morgan Hoffmann may not have a PGA Tour win, but you'd never guess it after Round 1 at Bay Hill, where a 6-under 66 put him in the lead. 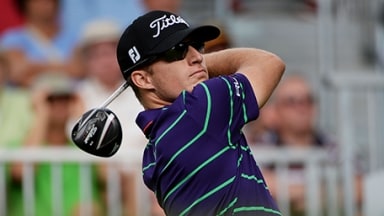 Hoffmann sleeping in old bed, moving up at Barclays

Morgan Hoffmann is staying in his old childhood bedroom this week, and the home-cooking is treating him well.