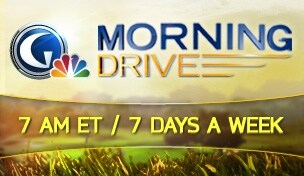 New studio. New format. New co-hosts. The list of reasons to wake up to television’s only LIVE morning golf show just got longer with the announcement that Golf Channel’s popular Morning Drive will re-launch on February 4 with a schedule that’s been expanded to seven days a week LIVE at 7AM ET.

Since Morning Drive’s debut in January 2011, the show has become a hallmark for viewers seeking the latest golf news and information, as well as expert analysis and discussion about all things golf.

The show’s new format will continue to set the table for what’s new each day in professional golf, while expanding its scope to cover the golfing lifestyle, including how to play, what to play and where to play.

With the show’s expansion to seven days each week, the Morning Drive cast grows as well. Current co-hosts Gary Williams, Damon Hack and Holly Sonders will be joined by analyst Charlie Rymer to form the on-air “foursome” typically covering Thursdays through Mondays.

Longtime Golf Channel anchor Kelly Tilghman will be a central figure mid-week on Morning Drive, typically on Tuesdays and Wednesdays. Matt Ginella will also be a co-host throughout the week. Ginella comes to Morning Drive after 11 years as the travel editor for Golf Digest magazine and has a keen sense of what makes a golf course a destination for golfers of all tastes. Lauren Thompson, who has been a regular contributor to the show, now will have a permanent role, providing news updates and reports for midweek shows.

Turn on. Tune-in. Tee off. Every Morning at 7AM ET LIVE on Golf Channel.