Back to the future: Oahu golf courses look to revive the glory days 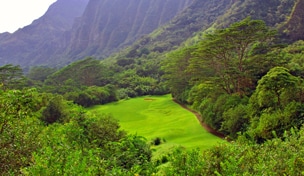 HONOLULU, Hawaii -- There are glimpses of golf greatness on Oahu.

The 17th green on the Palmer course at Turtle Bay Resort sits 100 feet from the ocean, overlooking the crashing waves. The 15th tee at Ko’olau Golf Club delivers a panoramic view of the mountains and a tropical rain forest. To get to the 12th tee at Ko Olina Golf Club, players drive their carts under a manmade waterfall and rock landscaping.

Oahu boasts the most golf courses of any Hawaiian island. Yet it still is widely dismissed as a second-tier golf destination in Hawaii, long removed from its heydays of the 1970s and 1980s when it was king. Today, its top courses lack the star power and ocean views of those on its sister islands. There’s no Top 100 track that serves as a beacon to attract players like Maui's Plantation Course at Kapalua or Kauai's Prince Course at Princeville. There are no true ocean holes, either. And many of the courses aren’t consistently in great shape.

Mark Bowlby, an Idaho resident, spent two weeks in January playing golf on the Big Island and Oahu. Bowlby, who has visited the islands 15 times, said the difference between each golf scene was striking. He fell in love with the new-and-improved Mauna Kea Golf Course on the Big Island. “I felt that the courses I played on Oahu were a little weak relative to other islands,” he said.

Mind you, a fantastic golf getaway can still be had on Oahu. It’s only considered “weak” when compared to the world-class competition nearby. There are three luxury golf resorts and plenty of Hawaiian culture and natural beauty to explore on Oahu.

His company has purchased five courses on the island in the past three years.

“The last 30 years the standards of maintenance and design and the quality of courses (on Oahu) has taken a hit,” he said. “There have been quite a few built and not well maintained. … We think we can bring more sophistication to the industry there. A lot of the course presentation and service isn’t what it is on Maui. We are looking to change that.” Oahu’s best golf resorts are all so uniquely different.

Turtle Bay Resort works in harmony with the gorgeous North Shore and its signature natural resource, the ocean waves. Guests can take a surf lesson at the Hans Hedemann Surf School of Oahu or sit safely on the sidelines, watching more experienced people tackle the challenge.

The well-conditioned Palmer Course, a former LPGA TOUR and Champions Tour host, plays resort friendly with a few tough approach shots over water sprinkled in for effect. The George Fazio course serves up a few more glimpses of the ocean with fewer shot-making demands. Under new owners, the resort just completed a major renovation of its lobby and Surfer, The Bar. Makeovers of the guest rooms and restaurants are on tap.

Ko Olina, a resort community on the dry and sunny leeward side of the island, translates in Hawaiian to “place of joy.” Adjacent to four secluded ocean coves, the JW Marriott Ihilani Resort & Spa certainly follows that mantra. The hotel’s unique design showcases a collection of saltwater ponds filled with reef sharks and stingrays. All 387 guest rooms and suites were refreshed in 2011. A visit to the Ihilani Spa, refurbished in 2010, for a traditional Hawaiian lomi lomi massage or a seawater soak in jetted tub will set the world right again. Across the street, the Ko Olina Golf Club began hosting LPGA events in the 1990s, including the 2012 and 2013 LOTTE Championship. Architect Ted Robinson created a pretty palette for golf. Afterwards, splurge on dinner at Roy’s Ko Olina Restaurant next to the clubhouse or walk to Paradise Cove for an interactive Hawaiian luau.

Golfers looking for more action should stay at the Hawaii Prince Hotel Waikiki to revel in the hustle and bustle of Honolulu. All of the rooms and suites in its two towers face the Pacific Ocean and the Ala Wai Yacht Harbor, as does a rooftop pool and hot tub on the fifth floor. Free shuttles run to the Waikiki beach and shopping district and to the playable Hawaii Prince Golf Club, a 27-hole Arnold Palmer/Ed Seay design 40 minutes away in Ewa Beach. The hotel's Prince Court restaurant serves a popular seafood buffet for dinner. Pacific Links International, a Canadian company formed in 2009, bet big on Oahu by purchasing the Royal Hawaiian Golf Club, Kapolei Golf Club, Olomana Golf Links and the West and East courses at Makaha Valley Country Club. It hired Greg Norman Golf Course Design to renovate both the Royal Hawaiian Golf Club and the Makaha West course. The company even sponsored its first Champions Tour event, the Pacific Links Hawaii Championship, at Kapolei in September of 2012 as a coming out party for the brand.

The knock on Royal Hawaiian, formerly called Luana Hills Country Club, was always a layout too quirky to be enjoyable. Its intoxicating jungle setting reminiscent of Jurassic Park was just too unforgiving. Norman’s renovation to make the original Pete/Perry Dye more playable has revamped several holes on the front nine, especially to start the round. Simmonds said the extensive back nine changes should be completed this summer.

Norman’s work at Makaha West will take more time. The course, currently closed, could open in 2015, Simmonds said. This is the first time the neighboring West and East courses – both William F. Bell routings - have been under the same ownership since their openings in the 1960s. The East course, a par-71 of 6,369 yards, continues to operate as a value-oriented place to play. “The changes (on the West course) will be dramatic,” Simmonds said.

Like a lot of locals, Michelle Wie learned the game at the 6,326-yard Olomana Golf Links in Waimanalo. Infrastructure upgrades, while necessary, will have to wait.

In many ways, the Ko’olau Golf Club symbolizes golf on the island. It could be oh-so-good, but it’s not quite there. Like the Royal Hawaiian and Olomana, being located on the windward side of the Ko’olau mountain range has its drawbacks. It rains more here, which can often yield wet playing conditions. Ko’olau, ranked No. 25 on Golf Digest’s list of America’s Toughest Courses, would be well-served by a Royal Hawaiian-type makeover that enhances playability. American Golf, which manages the course for its unique owner, the First Presbyterian Church of Honolulu, has done an admirable job of taking out some bunkers and cutting back the jungle in recent years. On a clear day with dry conditions, there are few better golf playgrounds in the islands. Just be prepared to lose a few balls.

The Ewa Beach Golf Club, a 6,711-yard design by Robin Nelson, has none of those conditioning issues. It’s situated in one of the Oahu’s driest climates near the Hawaii Prince Golf Club. A Kiawe forest pinches the first nine holes before water hazards overwhelm the more open back nine.

Ewa Beach, too, symbolizes golf on Oahu. It’s underrated and finally becoming better appreciated..The same should be said of the entire golf scene on this special and diverse island. Oahu golf is still incredibly good, albeit not great … yet.