My mother hates sports, but she loves Tiger 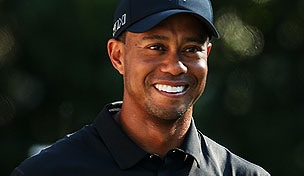 My mother is a huge Tiger Woods fan. Even now, one second after typing that sentence, I cannot believe that I just wrote those words. But it’s true. Somehow, it’s really true.

My mother, as I have written many times before, does not care at all about sports. I usually make this point by telling the unearned runs story – when my first baseball story appeared in a newspaper, Mom said she liked it but asked, “Who are you to decide that a run is unearned?” – but the truth is there are a lifetime of stories like that. There is no single story that could capture the day-after-day-after-day scorn she has expressed for these silly little games that took up way too much of my attention. I would never be able to count the times my mother shook her head at her oldest son and said the word “Sports!” with disdain. Nothing on earth seemed sillier to her.

She came by this sports indifference honestly … my mother’s father, if possible, had even less use for sports. My grandfather was a scholar in the old fashioned sense of the world. He was actually a tailor, but in every free moment you would find him in his library reading. It was never light reading. Never. He read history. Philosophy. Ideology. Law. I have this memory of him reading a medical journal of some kind. My grandfather read in four or five languages, there was some disagreement about that, and he would not read a novel if it was the last book left on earth. Shakespeare was too slight for him. Romance was beneath contempt.

And sports? My grandfather, more than once, would do this little one act play for me. The newspaper would come, and my grandfather – a small but sturdy man who I believe could have sustained himself on hot water alone – would take the paper in his two hands. He would very carefully take out the sports section (which, in those days, was often part of another section, like business). And then, he would tear it from the rest of the paper, march like John Phillip Sousa, and dramatically stuff it in the garbage. “That,” he used to say, “is what I think of sports.”

My mother was a slightly less devout non-sports fan – she always liked the Olympics, especially the Winter Olympics, especially the figure skating – but only slightly less devout. She never, ever was in the room when there was a baseball game or football game or basketball game on television. She did not come to watch my Little League games, as far as I know she never even considered it. This wasn’t a lack of attention – my mother always was VERY attentive to my life. It’s just that we did other things – read together, played board games and cards together, went to the movies together. Sports was for me and my father. She thought it a complete and utter waste of time.*

*It was always entertaining when we were playing Trivial Pursuit, and my mother landed on orange for a sports question. Every single baseball answer was Babe Ruth. Every single one. He was the only baseball player she could reliably name. She might know of Pete Rose or Joe DiMaggio or Jackie Robinson, but she would almost certainly get the first name wrong. For a golf question, she once guessed Jack Nicholson.

This has not changed much in my 25 or so years as a sportswriter. Out of love, Mom does read my work, at least some of it, so she has involuntarily picked up a few things. I do believe my mother, alone among her peer group, could tell you that the win is a lousy way to judge a pitcher’s performance. But, all in all, the state of affairs has remained constant. My mother will talk all day about politics. About movies. About just about any television show out there because she watches them all. About what’s a good bargain at Costco and what isn’t. But sports. No. Never.

So, it was kind of shocking when one day, not so long ago, she told me that she watched a golf tournament because Tiger Woods was in it. My mother had a strange reaction to the Tiger Woods scandal of a few years ago, the opposite of what you might expect. Up to that point, Tiger Woods was just a name to her – maybe not even a name. If my Mom cared nothing at all about sports, golf was even lower on the list. Golf, in addition to being a sport, was a COUNTRY CLUB sport. It had nothing at all to do with her life. She read things I wrote about Tiger Woods, but that’s where it ended.

Then the scandal … and Mom did not like the way the tabloids and people went after Tiger Woods. It isn’t that she approved of his lifestyle, it’s more like she didn’t think it was anybody else’s business how he lived his life. All that was between Tiger, his wife, his family, she had no use at all for all the rumors and stories and judgmental attitudes. “It’s not like he broke any laws,” she said. To her, Tiger Woods is rich and famous, and she figured how he lives his life is his own affair – same as Robert Redford and Leonardo DiCaprio and Anne Hathaway and anyone else she only knows through the prism of their fame.

So, when Woods came back to golf, while people openly wondered if Woods would lose his fan base, he ADDED at least one fan, someone who had never once thought about golf for more than a half-second. She found herself rooting for Tiger Woods to win. And in rooting for Tiger Woods, she actually got hooked on watching golf. Key word: Watching. My mother would be no more likely to swing a golf club than jump from a plane. But watching golf – well, one of many things my mother and I share is our slightly obsessive personalities. When my mother gets hooked on something like television golf or television poker (she knows EVERYTHING about it) or American Idol or Game of Thrones or Harlequin Romances, she goes all in. Mom doesn’t care for Bruce Springsteen, but I think she likes how much I like him because, well, I’m her son.

Back to golf: Mom will only watch when Tiger Woods is playing (making her like many other people), and she is thoroughly into it. She has opinions about different golfers. She follows the schedule closely. The weekends have become little golf miniseries. Always, she wants Tiger Woods to win.

*When thinking of this ridiculous “feud,” I can’t help but think of Jim Murray’s line about the Twin Cities: “(They) didn’t like each other and from what I could see, I didn’t blame either of them.”

She just said that Tiger is a marvel because he’s always at the top. The other golfers on the leaderboard change, they rise and fall, they miss the cut one week and win the tournament the next, new names seem to fall out of the sky. But Tiger Woods is always there, always in contention, always great. That’s what impresses Mom. That was at the heart of her constant message to us kids. Anyone can be good once or twice. Anyone can succeed when they’re feeling good, when the breaks go their way, when they have natural talent. But to be good time after time, year after year, through the rough times, through the painful times, when the ball bounces badly, that is what it means to be successful and maybe even great.

“Do you think Tiger will win?” she asked me.

“He ALWAYS has a good chance,” she corrected.