Some senior college golfers will get another chance to compete for a national championship.

The NCAA Division I Council voted Monday to approve an extra year of eligibility for all spring-sport athletes, including men's and women's golfers, though the decision-making will be left to the individual schools.

The historic news follows an announcement earlier this month when the NCAA, which canceled the remainder of its winter and spring competition seasons on March 12 because of COVID-19 concerns, deemed it "appropriate to grant relief for the use of a season of competition for student-athletes who have participated in spring sports."

The financial cost of the ruling will fall not on the NCAA but rather on the schools, which will have the option to provide equal or less aid to seniors returning for an extra season in 2020-21. Additionally, teams will be allowed to carry more players on scholarship next season to account for those seniors receiving an extra year of eligibility next season.

Men's golf normally has a limit of four-and-a-half scholarships per year while women's golf is allotted six scholarships.

Non-seniors also will be granted an additional year of eligibility but will not be afforded the aforementioned scholarship flexibility being provided to seniors. The same goes for transfers, including seniors looking to switch teams for their extra year; they would count toward their new team's scholarship limits next season.

“The Council’s decision gives individual schools the flexibility to make decisions at a campus level,” said Penn athletic director M. Grace Calhoun, chair of the 41-person council, which has representatives from all 32 conferences. “The Board of Governors encouraged conferences and schools to take action in the best interest of student-athletes and their communities, and now schools have the opportunity to do that.”

Schools will have the ability to use the NCAA’s Student Assistance Fund to pay for scholarships for students who take advantage of the additional eligibility flexibility in 2020-21.

USA Today estimated last week that the NCAA granting an additional season of eligibility could cost Power 5 schools anywhere from $500,000 to $900,000 each and non-Power 5 schools about $400,000.

As for winter sports, the council denied those athletes an extra year. 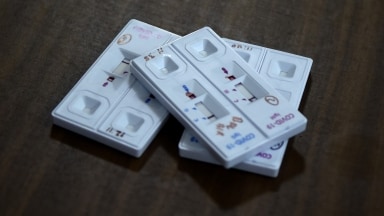 A PGA Tour memo to players on Monday said at-home COVID-19 testing is actually “strongly encouraged,” but not required.