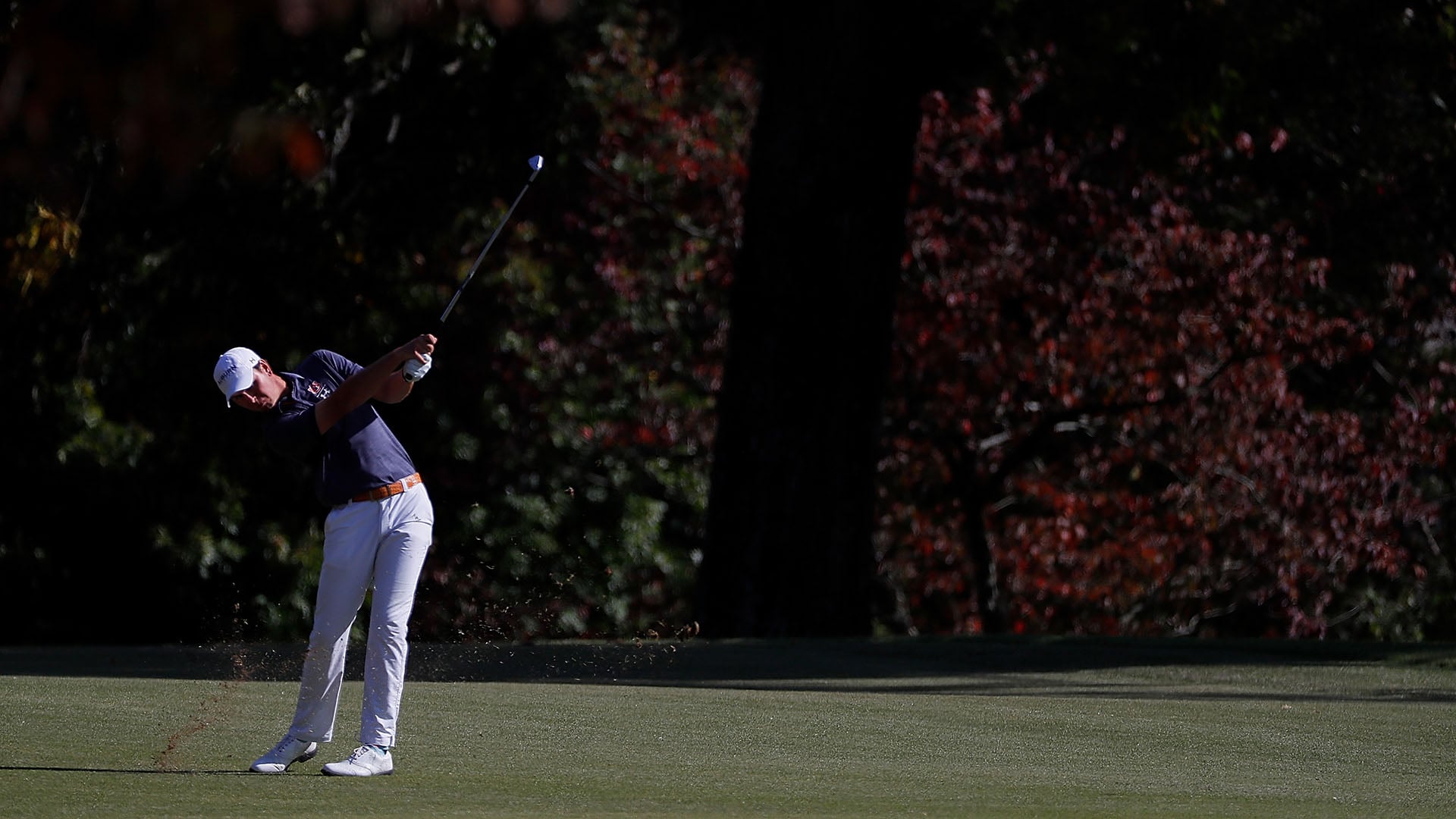 The top five teams and the top individual not on advancing teams in each regional move on to the NCAA Championship, which begins May 24 at Blessings Golf Club in Fayetteville, Ark.

Here is everything you need to know from Day 1:

Rounds of the day: Texas and Pepperdine. The host Longhorns were led by their three freshmen – twins Pierceson and Parker Coody, who shot 1-under 70, and Cole Hammer, who notched five birdies in an opening 70. The Waves were paced by their two lefties – Joshua McCarthy (67) and Joe Highsmith (68).

Biggest surprise: USC. The second-seeded Trojans got off to a slow start as their five players combined to make just two birdies and shoot 12 over on the front nine. The back nine was better, but USC, which missed out on the NCAA Championship a year ago, is six shots back of fifth after 18 holes.

Work to do: Iowa. The Hawkeyes were an under-seeded seventh seed but so far have done nothing to prove that. Aside from Benton Weinberg, no Iowa player is better than T-29.

Round of the day: Auburn. The Tigers picked up right where they left off after finishing runner-up to Arkansas in the SEC Championship final. SEC medalist Jovan Rebula, the nephew of Ernie Els, led Auburn with a 4-under 67 while Graysen Huff also went bogey-free in shooting 68. The Tigers counted just four bogeys and a double on Monday.

Biggest surprise: West Virginia. No player is inside the top 10, but the Mountaineers are in fifth after their first NCAA regional round since 1947. The program was reinstated for the 2015-16 season.

Work to do: North Florida. Few teams in the country are as experienced as the Ospreys, who boast four seniors and a junior in their postseason lineup. However, only Phillip Knowles (71) sits better than T-35 on the leaderboard after 18 holes.

Round of the day: Illinois. While not as star-laden as Mike Small’s past Illinois teams, this squad combined to make 24 birdies on Monday, led by Belgium’s Adrien Dumont de Chassart, who shot 5-under 67 to take the individual lead. Michael Feagles shot 68 and another Belgian, Giovanni Tadiottoo, shares 20th place with teammates Varun Chopra.

Biggest surprise: Zack Taylor, Coastal Carolina. For the second straight year, a PGA Golf Management student is starring for the Chanticleers. Taylor, a junior, walked on this season and now finds himself in position to advance to the NCAA Championship after shooting 4-under 68 with just one bogey. Taylor’s team missed out on advancing to regionals as the second-to-last team out.

Work to do: California. Third-seeded Texas Tech may be outside of the cut line, but the second-seeded Bears are on it and trying to avoid missing out on the NCAA Championship for a third straight season. Senior Collin Morikawa, a Haskins Award candidate, shot 2-over 74.

Round of the day: Georgia. Junior Spencer Ralston shook off a double bogey on his fourth hole to shoot 2-under 69 and sophomore Davis Thompson added a 69 of his own as the host Bulldogs were the only team to not shoot over par on Monday. Freshman Trent Phillips, who is coming off his worst finish of the season (T-56 at SECs), added a 1-over 72.

Biggest surprise: Memphis. Led by senior Brad Bawden’s 3-under 68, the 11th-seeded Tigers did just enough to sit inside the cut line after 18 holes. Sophomore Guillaume Chevalier, one of three internationals in the Tigers’ lineup added a 72, though Memphis, playing a regional for the first time since 2016, had to count two 75s.

Work to do: Alabama. The fifth-seeded Tide, without two top players from the fall (Davis Riley turned pro and Davis Shore is recovering from hip surgery), had to count three double bogeys and a triple, as well as Prescott Butler’s 81. But there’s still hope, as Alabama sits just 10 shots back and with three players at 4 over or better.

Round of the day: Texas A&M. The Aggies were a No. 1 seed a year ago and ended up making it to NCAA match play. This year they are a No. 4 seed and got off to a strong start in Pullman. Dan Erickson’s 1-over 70 was the throw-out score as Texas A&M was paced by Chandler Phillips’ 64 and Walker Lee’s 67. The Aggies started on the back nine and only had two bogeys from their counting players in the first 15 holes.

Biggest surprise: Michigan State. Led by Michigan native and UCF transfer Donnie Trosper, the ninth-seeded Spartans, making a program-record fourth straight regional appearance, shot 7 under and are two shots ahead of a four-team logjam at T-6. Trosper shot 65 while Troy Taylor and Kaleb Johnson each added 69.

Work to do: South Carolina. The No. 3 seed is part of that four-way tie for sixth. Scott Stevens was his usual self with a 67 while Ryan Stachler equaled that score. But the Gamecocks also have two players outside of the top 50.

Round of the day: Stanford. The second-seeded and host Cardinal continued their hot play Monday with a 6-under performance fueled by two seniors, Isaiah Salinda (4-under 66) and Brandon Wu (68). David Snyder chipped in with 67 for Stanford, winners of three straight tournaments.

Biggest surprise: UNCG. The Nos. 9, 10 and 11 seeds are all inside of the cut line through 18 holes, including 11th-seeded UNCG, which led outright for much of the day before stumbling a bit down the stretch. Jonathan Brightwell (67) and Nick Lyerly (68) led the way for the Spartans, who won a school-record four times this season.

Work to do: Arizona State. Three of the top four seeds are outside the number after Round 1, including No. 2 Arizona State. The Sun Devils had Nos. 4 and 5 guys, Blake Wagoner and Cameron Sisk, each shoot 69. But their top three players combined to shoot 11 over. 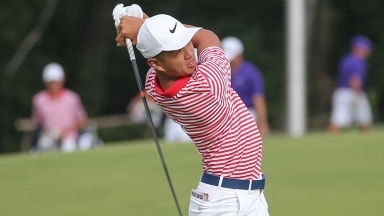 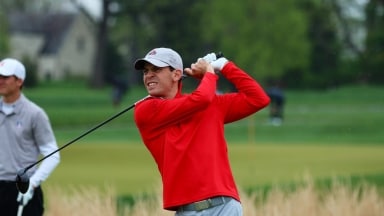 The NCAA Division I men’s golf regionals continued Tuesday at six sites across the country. Here is everything you need to know from Day 2. 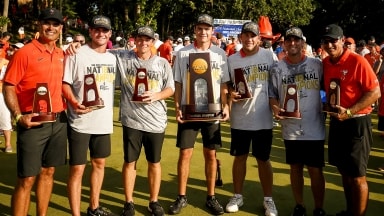 Oklahoma State highlights a group of No. 1 seeds for the NCAA men's regionals May 13-15 that also include Wake Forest, Vanderbilt, Arizona State, Texas and Oklahoma.