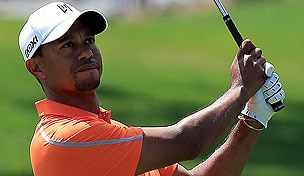 'He is focused on 20. That may be a little hard to believe, considering what's transpired in the last three years, but that's where his focus is,' Begay explained to Michael Rosenberg as part of a story that appears on the cover of this week's Sports Illustrated. 'He thinks he is capable of winning 20 majors.'

Nearly five years removed from his most recent major victory at the 2008 U.S. Open, Woods has shown signs of his former dominance in 2013, winning three times already this season. Coming off a two-shot victory at the Arnold Palmer Invitational in his last start, the 37-year-old is currently listed as a prohibitive favorite to claim his fifth green jacket next week.

With 14 wins in 60 major starts as a professional, Woods' success rate in golf's biggest four events exactly mirrors that of Nicklaus heading into the 1977 Masters. Nicklaus would go on to win his 15th major six starts later, at the 1978 British Open, before capturing his 18th and final major title at the 1986 Masters at age 46.

Now serving as an analyst for Golf Channel, Begay teamed with Woods while at Stanford before embarking on a professional career that included four PGA Tour victories.