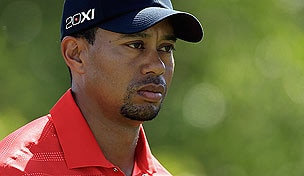 In an excerpt of 'The Big Miss' released by the New York Times on Saturday, former Tiger Woods swing coach Hank Haney writes about his perception of Woods as often feeling jilted by the media and his peers.

Haney says Woods has a distaste for the likes of Vijay Singh, Ian Poulter and Sergio Garcia. Woods prefers a more reserved character, according to Haney and collaborator Jaime Diaz. Haney also writes of being afraid to even ask Woods for a popsicle from his refrigerator.

“I have no doubt Tiger felt racial vibes in what he read and heard on and off the course, especially when he was matched up against Phil,' Haney writes.

The swing coach delves into Woods' relationship with his now ex-wife, Elin Nordegren, saying the pair showed little affection for each other.

'By the time she and Tiger married, she remained friendly but had become more guarded, even in her own home. She and Tiger developed a calm, almost cool relationship in front of other people, and conversations with them tended to be awkward and strained. I never saw them argue, but they weren’t openly affectionate either,' Haney writes.

A theme in the book, Haney asserts Woods became obsessed with high-stress workouts which, in Haney's view, did not help Woods as a golfer.

As Woods prepares to play seven consecutive days of tournament golf at the Tavistock Cup and Arnold Palmer Invitational, Haney claims Woods was not forthright about the cause of Woods' 2007 ACL injury. Haney writes Woods first injured his left ACL from 2007 training with Navy SEALs, rather than while jogging at home after the Open Championship as Woods asserted.

Haney also publishes emails and text messages between the two, including accusations by Haney of a lag in Woods' work ethic. The text messages, which precipitated Haney ending his relationship with Woods in May 2010, are also in the book.