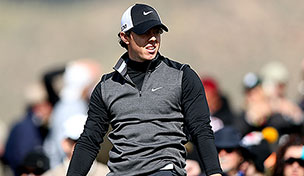 Despite an early exit from this week's WGC-Accenture Match Play Championship, world No. 1 Rory McIlroy remained a topic of conversation at Golf Channel's third-annual 'State of the Game,' with both Nick Faldo and Johnny Miller questioning the Ulsterman's recent equipment changes.

'I tweeted right from when I heard the news, that this is dangerous,' explained Faldo, who won six majors during his career. 'People say, 'Well he's so darned good, he can compensate.' But I don't feel when you've climbed that wonderful climb to world No. 1 that you should be compensating and trying to find a way for this equipment to fit you.

'I mean, I think it's a very dangerous time,' he added.

McIlroy gained headlines this off-season for a reported equipment switch to Nike, one that became official with a high-octane press conference in January and a rumored $200-$250 million contract. Since then, though, the reigning PGA champion missed the cut in Abu Dhabi and lost to Shane Lowry Thursday in the first round at Dove Mountain.

'It's very dangerous like you say. I went through the same thing,' added Miller, who has two major wins to his credit. 'I decided to switch and I switched everything. And I mean, I was like a fish out of water, I was gasping for air.

'So the minute I heard that he was going to switch everything, I'm thinking, 'Wow, that's a gamble.''

With the season's first major only six weeks away, McIlroy will now head to next week's Honda Classic, where he will defend the title he won a year ago over Tiger Woods, a victory that earned him the top ranking in the world. Miller explained that as the 2013 season begins in earnest, McIlroy's equipment changes may begin to have ripple effects on his frame of mind.

'The most important thing in golf is your confidence,' he noted. 'He already had the pressure from being No. 1 and trying to live up to it, and now he's got this whole new thing.'