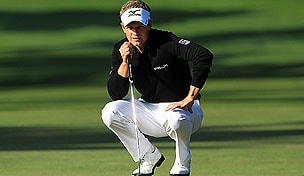 Getty Images
MADRID, SPAIN - OCTOBER 08: Sam Hutsby of England in action during Round One of the Madrid Masters at Cantro Nacional De Golf on October8, 2009 in Madrid, Spain. (Photo by Ian Walton/Getty Images)  -

SAN FRANCISCO – The No. 1 player in the world won’t win his first major championship this week at the U.S. Open. He won’t even see the golf course on the weekend.

Luke Donald was in one of the U.S. Open’s marquee groupings with Rory McIlroy and Lee Westwood – the game’s top three ranked players – and ended 36 holes at The Olympic Club with the worst score of the bunch.

Donald’s troubles began Thursday with an opening-round 79 and anything other than a spectacular round was going to lead to a missed cut. He played better Friday and shot 72, but ended the week at 11-over 151, well off the pace.

“I feel like I was just prepared as I’ll be,” Donald said. “I certainly don’t regret anything that I did before teeing up on Thursday. I just didn’t come here swinging well enough and obviously my putter was a bit cold this week.”

For the two days Donald recorded 14 bogeys and only three birdies. He’ll now head to the British Open in England at Royal Lytham & St. Annes in search of his first major championship victory.

“I want to win one more than any of you guys know,” Donald said. “And obviously I’ll continue to try to do that.”