With no wraparound, what will star players do with all their free time next fall? 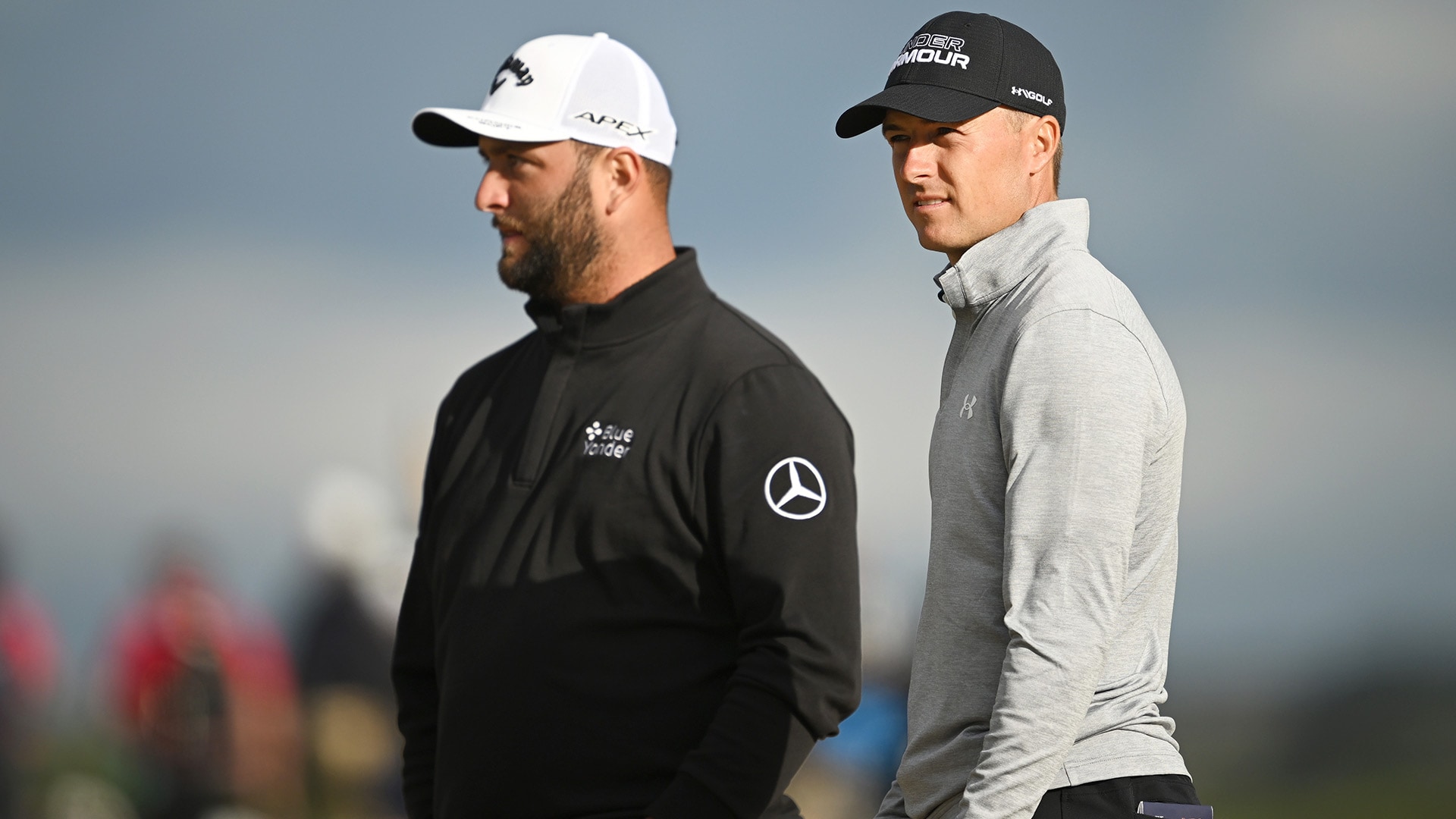 RIDGELAND, S.C. – Fifteen of the top 20 players in the world have assembled here at the CJ Cup, and it’s easy to see why.

Limited field with no cut.

That latter factor is often repeated by players. This is the final season of the PGA Tour’s wraparound schedule, and the fall slate (nine official events) comprises a fifth of the overall schedule. It might feel like a sleepy time of year, but it’s proven to be vitally important in reaching the Tour Championship. “I don’t want to start behind like I have the last two years,” Jordan Spieth said. And so if the top players are only going to play once or twice in the fall, they might as well have some guarantees for their time. Hence, their appearances here.

But with the Tour ending the wraparound era next fall, the elite player will soon be going into hibernation for … well … the first time in their golfing lives.

It's quite the sea change.

Top players have been screaming for years that they want time off at the end of a long season, and it’s been one of the main talking points for the LIV defectors, even if it turned out to be a sham as they chased world ranking points and other opportunities all over the globe. Brooks Koepka – who once claimed that he doesn’t practice before regular-season events – said last week that it “kind of sucks” that the LIV schedule was winding down and players were set to have four months off. After two injury-plagued seasons, he had finally reclaimed his game.

“Every other sport has a pretty significant offseason,” Max Homa said, “and now everybody is wondering what the heck is going to happen.

“Well, we can do whatever we want.”

Some will disappear from public view and reprioritize their personal lives.

“Taking three to four months off is not a big deal,” said Billy Horschel, noting how players took a lengthy break with the COVID shutdown in spring 2020. “I realized that I could do that. I could see what life would be like when golf isn’t first in my life. Right now it still is, and I have a wife and family and they understand that golf comes first a lot of times, that it provides what we have and what they’re going to have in their future. But it’s going to be nice for a lot of us to kick golf to the back burner and put other things in the forefront of our lives.”

Others will implement long-overdue swing changes or bed in new equipment.

Form ebbs and flows during a Tour season, but top players are always cognizant of trying to incorporate any significant changes to their game, lest their performance drops off and they spoil their shot at the legacy-defining majors or the lucrative postseason. Spieth arrived here at Congaree for his first start since his unbeaten performance at the Presidents Cup. He was away for three weeks, but he wasn’t off. He didn’t shelve his clubs. In fact, feeling as though he’d broken through with his inconsistent ball-striking, he returned to the course with swing coach Cameron McCormick a few days after Quail Hollow, wanting to build a plan to continue this encouraging progression. Their model for the remainder of the fall: See McCormick a few times a week, then go play with his buddies the other days. It doesn’t sound like much of a mental or physical reset, but as Spieth said: “I’ve never gone over a week without getting the itch to come back.”

Everyone, though, will repair their battered bodies.

Spieth’s casual rounds in Dallas are less taxing than the wear and tear of the full Tour season. There’s a reason why other sports have dedicated offseasons – the athletes need time to recover. Sure, Tour players don’t absorb the same physical beating as a workhorse running back or a bruising power forward, but all of the swinging and twisting and torquing at high speeds – it takes a toll. The increased demands on these battered bodies help explain why some top players’ peak years now seem to arrive earlier but end quicker.

This will be Homa’s 21st start of the calendar year – he has “worked” for less than half the year – and yet it feels like he’s been going nonstop. “I always say that when we have one week off in between events, it’s not really a ‘week off,’” Homa said. “A week at home is way more work than it is out here. This seems like a lot, but it’s actually less; it's about getting ready, because by Sunday, you still need to be feeling good.

“And so when you have a week off, it’s almost worse. When you have two weeks off, it feels like a week off because you can take a couple of days off the first week and not feel like you have to go balls to the wall.”

From a business perspective, downtime for the A-listers makes sense, too.

“You have to give everyone involved a break,” Horschel said.

Added Rahm: “Right now, for lack of a better word, it’s a little bit diluted. I’d hate for the PGA Tour to reach the status of tennis, where unless it’s a major or you’re a hardcore tennis fan, you don’t know any other event. I’d hate for golf to get to that point. We have some great events. I think it’s time for us to take action and do something special.”

Beginning next year, the top players will compete against each other in at least 17 events, including the majors. Those elevated Tour events will feature $20 million purses and scream to fans, essentially: These are the tournaments that matter. And when the season concludes with the Tour Championship in late August, well, those stars are free to go their separate ways. Everyone outside the top 70 in points will compete in priority-type fall events to determine status for the following year.

The leading Americans and Europeans will work to remain sharp for the next month, with the Ryder Cup on deck. But even after the matches in Rome, some will undoubtedly play in the devalued fall tournaments or chase appearance fees overseas.

Homa will defend his title in Napa and add “one to two events anyway.”

“Hmmm, why …?” he said. “Because I don’t know what I’d do with myself for three whole months.”

Spieth said he might take a few buddies’ trips to let loose but also to remain competitive, just as he did in May 2020, during the COVID shutdown, when he joined Justin Thomas, Rickie Fowler and others for a few days at the Ohoopee Match Club.

“It will be nice to be able to step back, get more done in the gym and then build a schedule that really suits everything that we want to do to make the PGA Tour as good as it can be from January to August,” he said.

Horschel could see himself taking three months off, his days occupied with range work and gym sessions, yes, but also his young daughters’ cheerleading practice.

Rahm envisioned a scenario next fall where the only two times he played were his home Open in Spain and the DP World Tour’s finale in Dubai.

“Ideally,” he said, “it’s three to four months off. I don’t know if I could do it because I’ve never done it, but on paper it sounds amazing.”

Soon, it won’t just be hypothetical.

The seasons are changing. 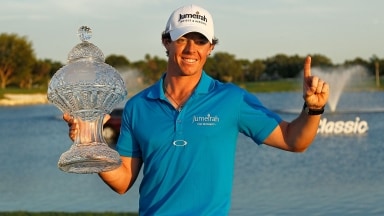 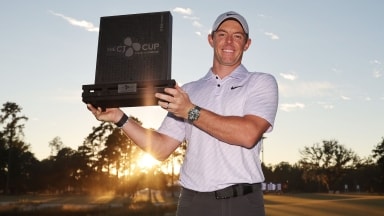 Rory emotional after defending, regaining No. 1

Rory McIlroy capped off his steady march back to No. 1 in the world on Sunday at CJ Cup with an explosive burst of three birdies. 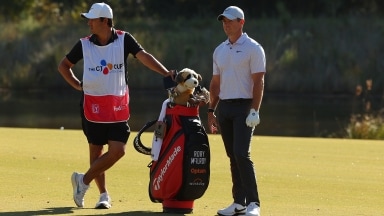