From Oklahoma to China, Kwon perseveres to keep dream alive 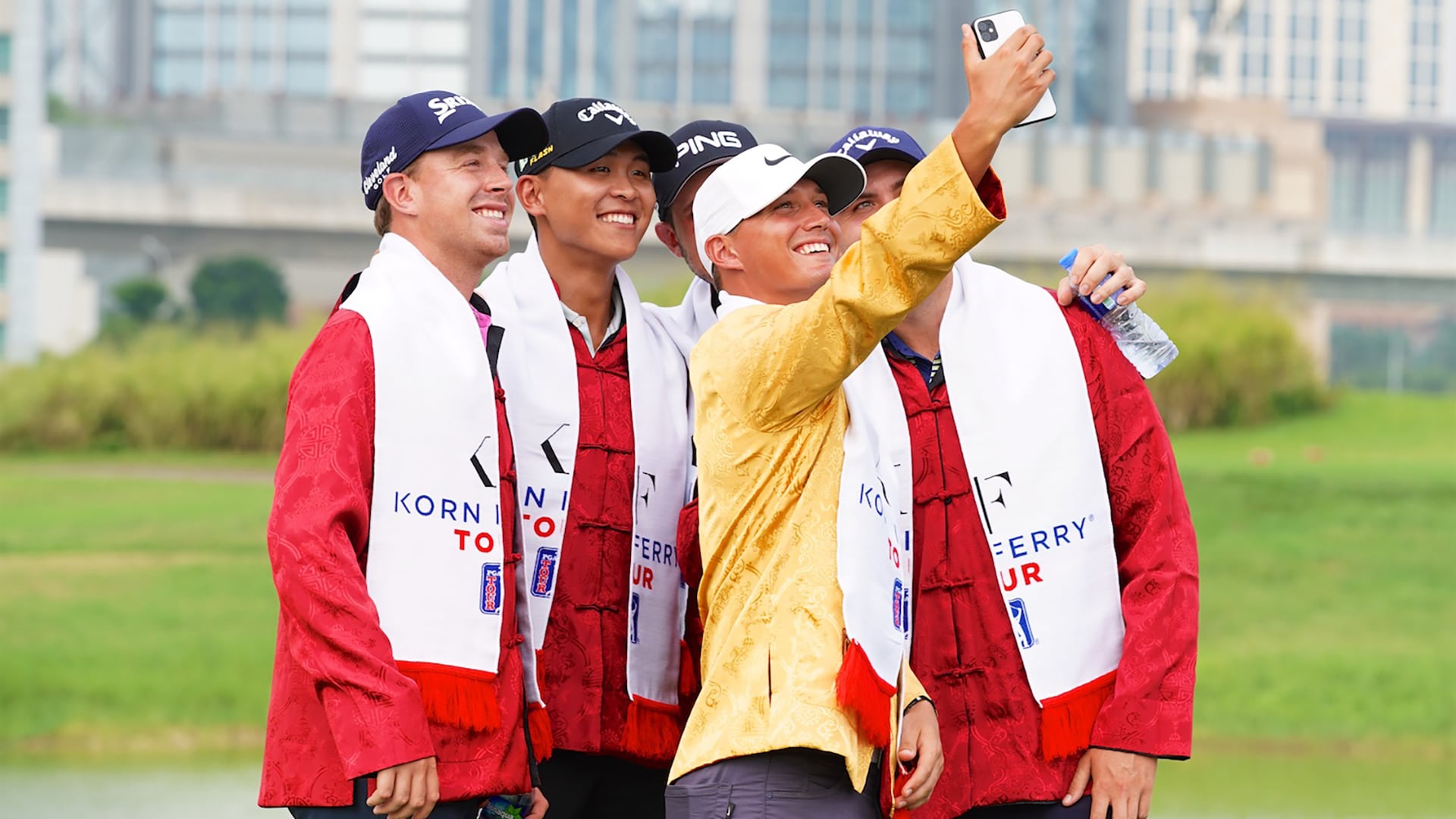 Luke Kwon was 30,000 feet in the air, nearly on top of the world, but he couldn’t help feeling like he had just hit rock bottom as he typed the short, nine-word sentence on a flight back home.

After missing out on advancing through the first stage of Korn Ferry Tour Q-School in 2016, Kwon, who moved from South Korea to the U.S. at age 2, saw his one shot at getting a work visa – and remaining in the U.S. with his family – slip away.

His back was against the wall. But he had been there before.

Kwon dreamed of playing Division I golf, but in 2011 ended up enrolling at Division II St. Edward’s in Austin. The transition to college was tough for Kwon. He struggled in the classroom, often felt homesick and suffered a fractured hand his first semester.

“I thought I was done,” Kwon said.

But in his second semester, Kwon improved his grades, got healthy and turned his game around. He recorded six top-10s, including a win at the St. Edward’s Individual Challenge, and led the conference in scoring average (73.2) to earn All-American status as a freshman.

The stellar play caught the attention of Oklahoma, which had recruited Kwon as a junior player but eventually ran out of space for him. After one year at St. Edward’s, Kwon transferred to the Sooners program.

Upon arriving in Norman, Kwon was already behind the 8-ball. The Sooners had a stacked, deep squad that included players such as Abraham Ancer and Michael Gellerman. Ancer will play the Presidents Cup this year, while Gellerman also plays on the PGA Tour. 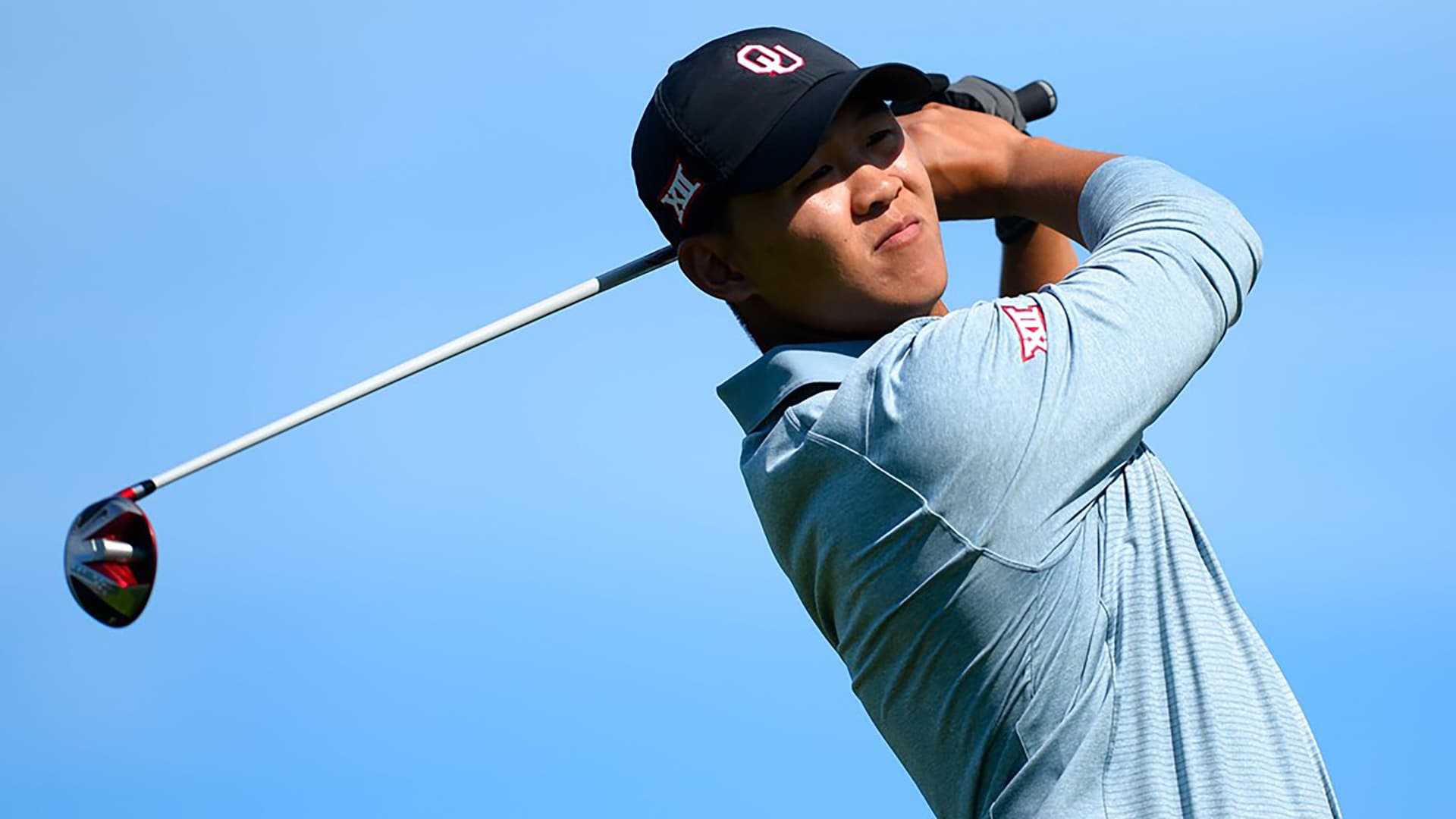 To make matters worse, maturity issues began to arise for Kwon, who often wouldn’t wake up in time for workouts, practice or class. Oklahoma head coach Ryan Hybl nearly kicked him off the team – and would have had Kwon not been the “glue guy” for the Sooners.

Hybl gave Kwon an ultimatum: No practice for two weeks. Kwon’s only job was to wake up at 6 a.m. to meet with the weight-training staff. Miss one, and he was gone.

“I knew then that’s when it meant that much to him because he never whiffed,” Hybl said. “He earned my respect knowing that it was his job at that point, that was his only job was to wake up.”

Kwon redshirted the following season and began to crack the lineup during his redshirt-junior year. As a senior, he played in 13 events, earning six top-20s and five top-10s, including his first career DI win at the Puerto Rico Individual Classic.

In addition, Kwon helped the Sooners reach match play for the first time at the 2016 NCAA Championship (Oklahoma has now advanced to NCAA match play in four straight years, including in 2017 when the Sooners won the NCAA title at Rich Harvest Farms). Oklahoma fell to Texas in the quarterfinals, with Kwon earning the only victory, 4 and 3, over current PGA Tour player Scottie Scheffler. 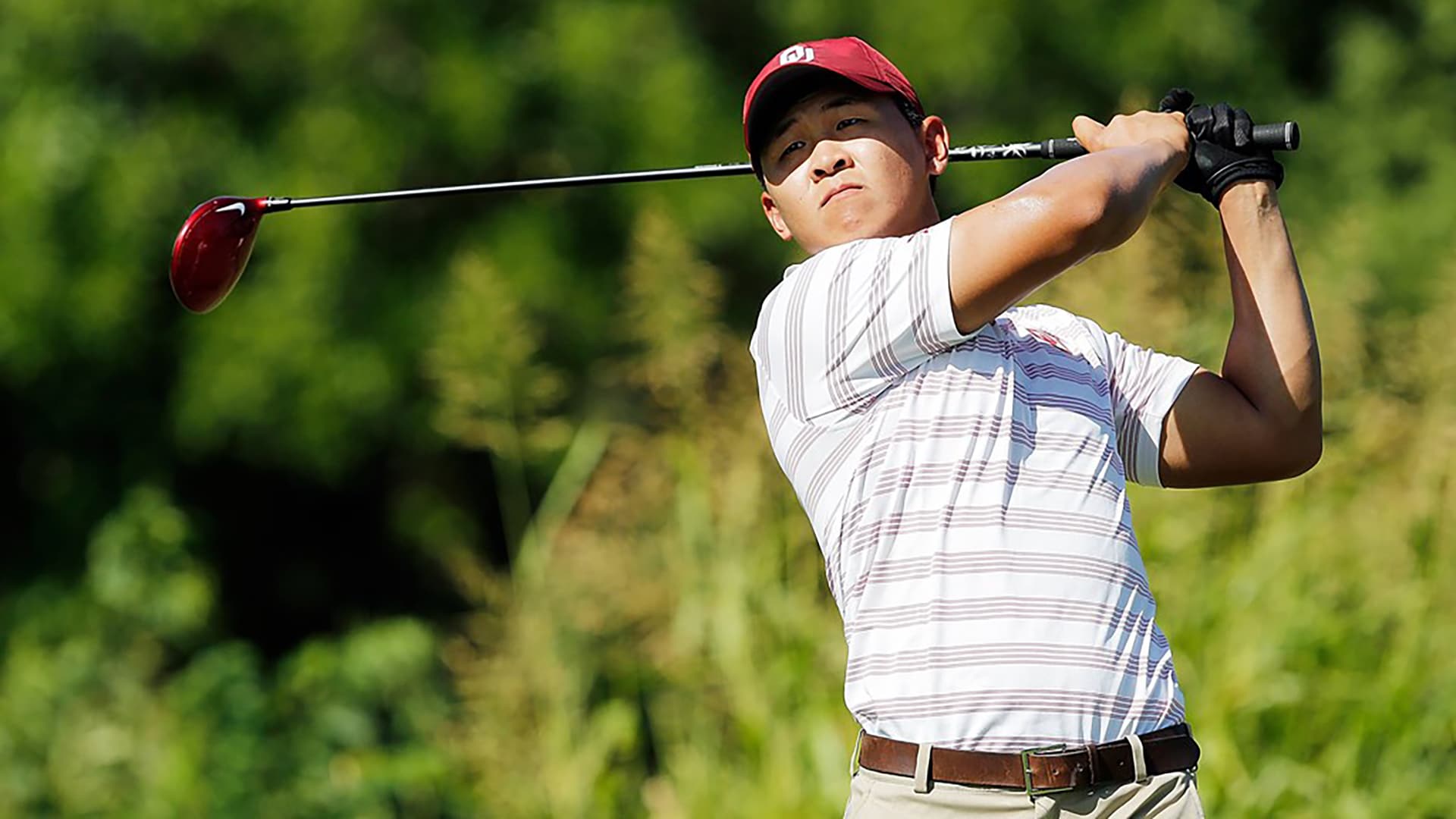 Meanwhile, Kwon’s dependency on his parents’ work visa was beginning to run out. At 21, he was on his own. For the past 13 years, Kwon was waiting on a green card and never got it, so he was forced to switch to a temporary student visa.

After graduation and with no playing privileges anywhere, Kwon reached a crossroads: give up golf and get an office job in the U.S. or go overseas and play professionally in China. While he mulled the decision, Kwon worked as a forecaddie in Dallas, which allowed him to continue to practice while making money. But that didn’t last long.

“I was just spinning my wheels trying to make rent every month and I was soon going to have to leave my family,” Kwon said. “I felt like someone else that didn't know me was telling me to quit. But I had two huge problems: I didn't have the money to fund my journey and my visa status in the U.S. was running out, so my time was very limited.”

With his visa set to expire, he finally made the difficult decision. He packed his bags, headed to the other side of the world and tried to make a living in China.

“Back up against the wall, that’s Kwon’s thing,” said Kwon’s former college roommate, Max McGreevy, who also roomed with Kwon in China and earned his KFT card this year.

Kwon played three times on the PGA Tour China Series at the end of 2018 and gained full status for the 2019 season. But the transition overseas wasn’t easy on Kwon. 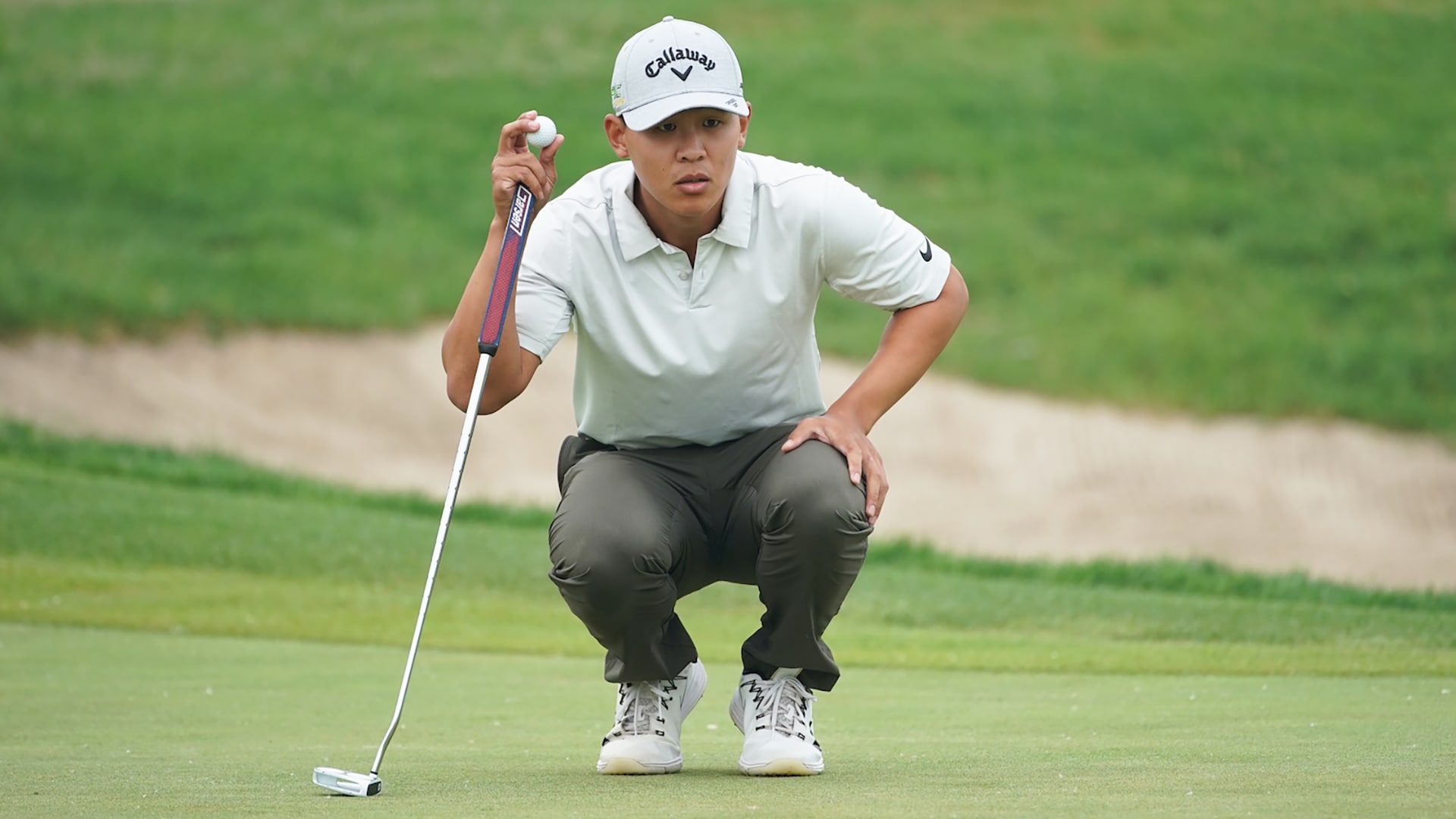 “China definitely had its struggles, but that just comes with the territory when traveling,” Kwon said. “I started the year with a lot of food poisoning over and over, so I was legitimately scared of eating there. McDonald’s was my ol' trusty, though. We probably went to McDonald’s more this year than I have my whole life.”

The on-course struggles were no joke, either.

“China's style of golf courses are a little different than what we're used to in the U.S. It's so much more penalizing off the tee,” Kwon said. “A lot of holes where it's driver off the box and there’s bushes left and right that aren't marked as hazards.

“There was one hole in China Q-School that I backed off multiple times because I was just so scared of the tee shot. But I definitely learned to block out the negatives and trust in your ability and rip it like you would on the range.”

Once Kwon adjusted to his new – and hopefully temporary – life in China, things began to fall his way again, just as they did in Austin and Norman. Kwon recorded six top-10s, none sweeter than a victory at the Qinhuangdao Championship.

“It means a lot to me,” Kwon said. “I waited a long time to finally come out on top since writing that note. I just think, ‘OK, yeah, maybe I have worked hard,’ but I think one of the biggest reasons why I'm here today is because I just simply outlasted other people.”

Kwon finished fifth on the tour’s Order of Merit, which McGreevy won, and will head back to the U.S. with conditional status on the Korn Ferry Tour in 2020.

“Nothing in my life was pointing towards me playing golf and yet I moved to a different country, went to China and got top 5 on the Order of Merit,” Kwon said. “It would've been totally acceptable to throw in the towel and find something else with what I was faced with. 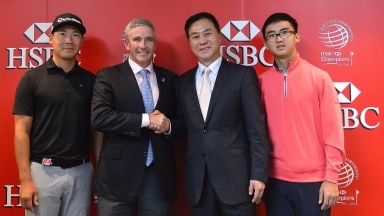 PGA Tour China to resume with full schedule in 2018

The PGA Tour has its first Chinese members, and now has reason to believe they won't be the last.