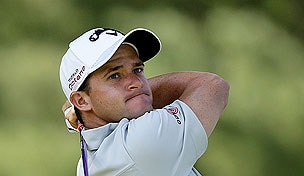 ORLANDO, Fla. – Sam Saunders first played the Arnold Palmer Invitational as an 18-year-old. After leaving Clemson, he received a sponsor's exemption each of the past three years, twice making the cut without being in serious contention.

The exemptions were not surprising. He's Palmer's grandson.

Saunders, though, is playing this year on the Web.com Tour. He finished 50th on the developmental tour a year ago. He tied for 12th in Chile two weeks ago. He is in Louisiana this week. The hope is to try to finish among the top 25 to secure his PGA Tour card.

''That's where he needs to be,'' Palmer said. ''If he's good enough to play here, he has to prove it to me. He has to play on the dot-com tour first. He's aware of it. He's very aware of it. Why do they want to play here if they can play over there until they're qualified to be over here?''

Palmer believes his grandson is on the right track and now needs only some consistency, which he is likely to find in a full season on the Web.com Tour.

He also was aware that giving his grandson a spot at Bay Hill meant turning down a more deserving player.

''I've got to look at all these kids in the face when I gave Sam an exemption, which he doesn't deserve,'' Palmer said. ''How can I tell them they don't get an exemption if they're good? So it was an easy decision.''

TIGER TALES: Even if Tiger Woods doesn't win at Bay Hill and return to No. 1 in the world, he is assured of one record this week.

Woods will be among the top 10 in the world for the 789th week, breaking by one week the record held by Ernie Els. Woods first reached the top 10 after winning the Masters in 1997 (he went from No. 13 to No. 3 that week), and he stayed there for 736 consecutive weeks until May 15, 2011, when he dropped out of the top 10 after withdrawing from The Players Championship.

He returned to the top 10 after winning at Bay Hill last year and has been there ever since.

Meanwhile, Bay Hill is the first of two chances Woods has this year to break Sam Snead's record on Tour for most wins at one tournament. Snead won the Greater Greensboro Open eight times.

Woods has seven wins at Bay Hill and seven wins at Firestone. He won for the eighth time at Torrey Pines in January, but one of those was the U.S. Open.

PUTTING TIPS: Curtis Strange compiled plenty of experience in his 20 years playing the Masters, which included a runner-up finish in 1985. He can think of no other golf course where experience means so much, especially on and around the greens.

''There are chips, pitches and putts we don't get anywhere else, you can't duplicate it at home,'' Strange said. ''Speaking for myself, I was never comfortable on the greens until the weekend.''

Strange said if he could start his career over, he would spend more time on the practice green, which has some strange contours.

''I remember spending one afternoon with putting contests, just doing goofy stuff, and it helped enormously,'' he said. ''You cannot duplicate those putts anywhere else.''

DIVOTS: Dan Jenkins has been named winner of the APSE's Red Smith Award, given to a person who has made major contributions to sports journalism. Jenkins will be honored June 28 in Detroit, not far from where he first covered his first major at Oakland Hills in the 1951 U.S. Open. ... Yani Tseng now has gone a full season without winning. ... KPMG is giving its Lifetime Achievement Award to PGA Tour commissioner Tim Finchem and European Tour chief executive George O'Grady. ... The European Tour is bumping the prize money at its flagship event, the BMW PGA Championship at Wentworth. The purse will be more than $6.1 million (4.75 million euros). The winner will get more than $1 million. ... The Safeway Classic in Oregon will return to Columbia-Edgewater Country Club after four years at Pumpkin Ridge.

STAT OF THE WEEK: Stacy Lewis is the only American in the top 10 in the women's world ranking.

FINAL WORD: ''You just don't ever forget the shots you're faced with because you don't get them anywhere else.'' – Stewart Cink on Augusta National.