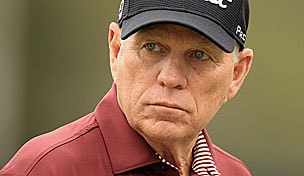 Butch Harmon first worked with Steve Elkington in the 1980s, and his roster of clients has grown enormously over the years. He coached Greg Norman and Tiger Woods during their rise to No. 1, along with four players in the World Golf Hall of Fame – Ernie Els, Phil Mickelson, Jose Maria Olazabal and Fred Couples.

But when he worked with President Barack Obama at The Floridian, he was referred to only as Woods' former swing coach.

''I haven't been with him for 10 years. It's irritating to be honest,'' Harmon said. ''I guess they were looking for a connection because the president was playing with Tiger. But people think Tiger made me successful. No one remembers I took Greg to No. 1 in the world or all the work with Elkington, or Davis Love III. It's the press. Anything to sensationalize. And you're dealing with a White House press that doesn't know any of these names.''

Hank Haney, on the other hand, expects to be linked with Woods the rest of his life. Then again, Haney didn't have such a long list of top golfers (except for Mark O'Meara) before coaching Woods, and he has said he won't coach another.

''It's a big honor to have coached Tiger,'' Haney said. ''You couldn't have a better feather in your cap, especially with the success that Butch Harmon had with Tiger. In terms of my coaching career, obviously nothing can come close to the opportunity I had to work with Tiger Woods.

''I never hit any shots and Butch didn't, either,” he said. ''My friend Bill Parcells always says it best. 'You are what your record says you are.' And so how Tiger played while you coached him certainly has a lot to say about you as a coach.''

AUGUSTA ON THEIR MINDS: Russell Henley said he couldn't feel his arms or legs on the back nine of the Sony Open. He was trying to win his first PGA Tour event, and Georgia was on his mind.

''I was trying not to think about Augusta out there,'' Henley said after his win, which earned him a spot in the Masters.

Scott Piercy won the Canadian Open last summer and talked about a promise he made to himself to not go to Augusta National unless he was in the Masters field. Ted Potter Jr. said it was a career goal to play in Masters after he qualified by winning The Greenbrier Classic.

These stories likely are to weigh heavily on Augusta National chairman Billy Payne when he decides whether Tour winners in the fall will be invited to the Masters. Payne could announce changes to the criteria during his Wednesday news conference at the Masters.

Augusta National returned to its practice of inviting Tour winners the year after the FedEx Cup began in 2007. But there was a caveat. The club invited winners only of Tour events that offered full FedEx Cup points. The opposite-field events, and the Fall Series held after the FedEx Cup ended, didn't count.

The Tour, however, is going to a wraparound season after this year. That means the six tournaments in the fall will be included in the 2013-14 FedEx Cup season.

The question for Augusta National is whether the winners of those six events will earn a trip down Magnolia Lane.

The club and Tour have been talking about it the last several months, and one person involved described the discussions as positive.

The Masters has the smallest field of the majors and wants to keep it that way to enhance the experience of those playing. It has not had more than 100 competitors since 1966, though it has come close in recent years, with 99 in the 2011 tournament.

The most likely scenario is for the Masters to take the winners of the six fall events and eliminate the category of top 30 on the Tour money list.

To follow that model a year ago, there would have been two fewer players at the Masters and three fewer players in 2011 and 2010. And with the U.S. Amateur Public Links soon to go away, that would free up another spot.

The Masters got away from inviting Tour winners in 1999. That was the same year the World Golf Championships began, and with the WGCs came opposite-field events the same week. That's a polite way of saying ''watered-down fields,'' and the Masters did not deem those winners worthy of an invitation.

Gabriel Hjertstedt won in Tucson the week of the inaugural Match Play Championship. He remains the only opposite-field winner to get invited to the Masters.

When it stopped inviting winners after 1999, the club said it was interested in the most consistent player throughout the year. That's why the Masters is likely to continue taking the 30 players who qualify for the Tour Championship.

And perhaps it's no coincidence that the Tour is looking to tweak its FedEx Cup points system so that one high finish in the playoff events doesn't get a player to East Lake (see Chez Reavie in 2011) and qualify him for three majors, including the Masters.

REST VS. RUST: Ian Poulter was never tempted to return to golf earlier than he planned, and it worked out just fine for him. After a six-week break following Kapalua, he returned at the Match Play and reached the semifinals, before losing to Hunter Mahan and then Jason Day in a meaningless consolation match.

His quarterfinal match was a perfect example of how players can be sharp, even after a long break. He beat Steve Stricker, who also had not played in six weeks.

''I guess I was glad to beat a part-timer,'' Poulter said.

Poulter said he did not play a single round over the last four weeks of his break or even one hole on a golf course. He spent his time on the range, tuning his equipment. It reminded him of the early days working in a golf shop, when his duties left him no time to play on the course.

Some players have had time off, though not by choice.

Rory McIlroy goes into The Honda Classic with three competitive rounds this year, having missed the cut in Abu Dhabi and losing in the first round of the Match Play.

OPEN QUALIFIER: Tianglang Guan will find out this week if the 14-year-old from China gets to play in two majors this year.

Also in the field are Cheng-tsung Pan of Taiwan, the runner-up to Guan and the highest-ranked Asian amateur at No. 5; and Hideki Matsuyama of Japan, a two-time winner of the Asia-Pacific, who made the cut both times he played in the Masters.

DIVOTS: The OHL Classic at Mayakoba, held opposite the Match Play Championship the last six years, moves to November this year. Tournament officials were at Dove Mountain with a clever recruiting tool and to remind players of the date change. They gave players an iPad with their names engraved, loaded with information about the Mexican beach resort. ... Golf Channel altered its programming last week to show live coverage of the Women's Australian Open, where 15-year-old Lydia Ko was tied for the lead going into the final round. It had an audience of 288,000 viewers for a 0.22 rating. ... Trump Doral has signed on as the host course for the World Golf Championship event through 2023. ... Bo Van Pelt and Mark Wilson were elected co-chairmen of the player advisory council, meaning they will join the policy board next year.

STAT OF THE WEEK: Americans have won the last 10 official Tour events, their longest streak since 11 in a row from the 2010 Barclays through the 2011 Sony Open.

FINAL WORD: ''If they happen to play poorly at Augusta, those two, I think it's going to be a tough year for them as far as winning majors.'' – Johnny Miller, on Woods and McIlroy.