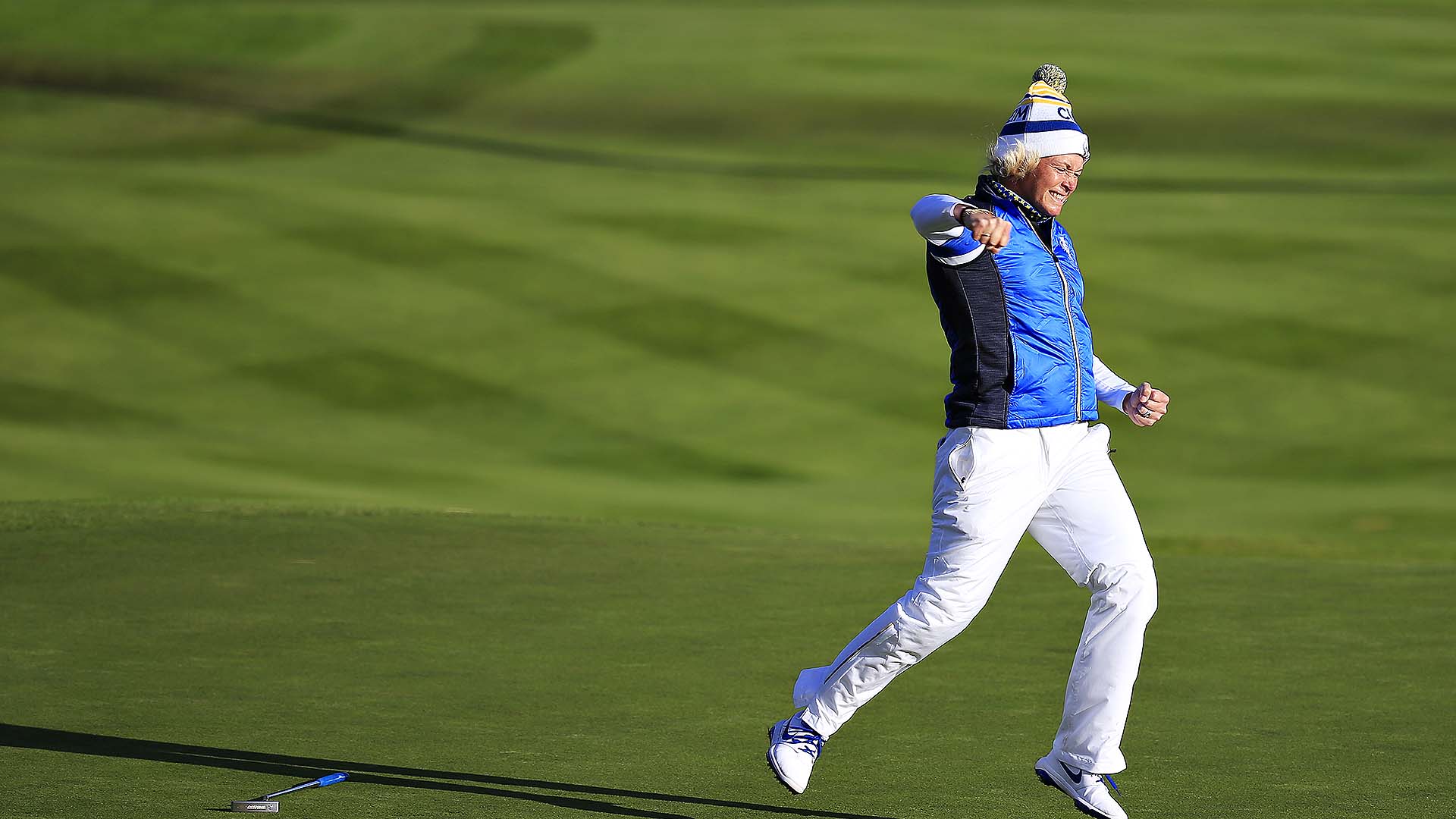 At the core of what made the Solheim Cup so special was it being decided by the final shot of the tournament at Gleneagles on Sept. 15. Pettersen rolled in a putt from just over 6 feet to beat Alex Marina, 1 up, and give Europe the victory. The ending became even better when Pettersen, a captain's pick, announced her retirement.

It's rare for the Ryder Cup or Solheim Cup to come down to the final match. For the men, the last time it happened was in Wales in 2010 when Graeme McDowell beat Hunter Mahan on the 17th hole. It's even rarer for the cup to be decided on the 18th green by the last match on the course. Think back to Bernhard Langer's miss at Kiawah Island in 1991 that handed the Americans the victory.

But to make a putt from the last match on the course to determine who wins? That happened only once before, way back in 1933.

Horton Smith, who the following year became the first winner at Augusta National, dispatched Charles Whitcombe to level the matches at 5½ points each. It came down to Easterbrook and Denny Shute, who were all square playing the final hole at Southport and Ainsdale.

Shute went bunker to bunker and blasted out to 20 feet. Easterbrook found the left rough, laid up and hit to about the same distance. If they halved the match, the Americans as defending champions would have kept the cup. U.S. captain Walter Hagen said later he wondered if he should have told Shute how the matches stood, but he was chatting with the Prince of Wales and "I thought it would be discourteous to walk out on the future king of England."

Easterbrook lagged his putt about 3 feet short of the cup. With a chance to win the match, Shute gunned his putt about 4 feet by the hole and missed it coming back. The Englishman holed the final putt of the Ryder Cup, giving Great Britain & Ireland the victory.

It took 89 years for another moment like that, and to show how much the golf landscape has changed, consider what happened the following week: The players headed north to St. Andrews for the British Open.

Shute got over his disappointment quickly.

Three shots behind Easterbrook going into the final 18 holes, Shute shot 73 and won a 36-hole playoff over Craig Woods for the first of his three major championships.

Paul Casey grew up in England, played college golf at Arizona State and has played around the world since turning pro — sometimes exclusively in Europe, recently only on the PGA Tour, lately a mixture of both.

It makes him chuckle to see the context of his victories.

Hang on a minute.

"I haven't played that many times in Europe since rejoining the tour last year," Casey said.

Since his victory in the KLM Open in 2014, Casey had played only seven regular European Tour events until his victory in September. He played once in 2015, the BMW Masters in Shanghai, the week after a World Golf Championship in Shanghai. He didn't play at all in 2016 and 2017, rejoining the tour to be part of the Ryder Cup again for the 2018 matches in Paris.

"Any win is special," Casey said.

Jon Rahm usually needs a little time to get over tough losses, and he was plenty disappointed after finishing runner-up to Danny Willett in the BMW PGA Championship at Wentworth. But he had another round of golf on the immediate horizon, and that made him happy.

Rahm headed straight from Wentworth to St. Andrews for the Dunhill Links Championship.

"I'm going to play the Old Course with my dad for the first time, so there's a lot of positives to look at," Rahm said. "It will be in bad weather, which I believe is how golf is supposed to be played in Scotland, right? It is how it is. There's many reasons why I should be smiling."

And then he offered one more.

"The week after that, I'm going to Spain," he said.

The PGA of America's highest honor is going to Nicklaus again — this time, Barbara Nicklaus.

Two decades after the wife of Jack Nicklaus was the first recipient of the "PGA First Lady of Golf," she has been selected for the PGA Distinguished Service Award for her role in the health care of children as part of the Nicklaus Children's Health System in South Florida. She is chairwoman of a foundation that has raised more than $100 million for children's health in 15 years.

Jack Nicklaus, the 18-time major champion, received the award in 2000. They are the first husband-wife duo to each receive the award. Mark and Debi Rolfing were selected as joint recipients two years ago.

The award is for individuals who show leadership and humanitarian qualities, including integrity, sportsmanship and enthusiasm for golf. She will be honored Nov. 5 in Palm Beach Gardens, Florida, during the PGA's annual meeting.

"Golf has been a very important part of my life for almost 60 years," she said. "It has opened so many doors to allow me to attempt to give back to the game that Jack loved when I met him and to the game that I now love, cherish and support unconditionally. ... Jack and I could never give back as much as we have been blessed to receive from this amazing game."

The PGA Tour still awards money, but it keeps score with points.

Starting in 2020, every circuit run by the PGA Tour will base its Order of Merit — typically known as a "money list" — on points. It will be modeled after the FedEx Cup, which has been around since 2007, and most recently the Korn Ferry Tour.

The points system now applies to the PGA Tour Latinoamerica, the Mackenzie Tour in Canada and the PGA Tour Series-China.

Latin America previously used the U.S. dollar, while the Mackenzie Tour used the Canadian dollar and the PGA Tour China used the Chinese yuan. The tour said it is switching to points to help avoid confusion with currencies.

The PGA Tour Champions uses money for the regular season and then switches to points for the Charles Schwab Cup playoffs.

Women's British Open champion Hinako Shibuno rallied from eight shots behind to win on the Japan LPGA Tour for her fourth victory this year. Shibuno started the year at No. 561 in the women's world ranking. She now is No. 11. ... Eighteen of the 24 players from the Solheim Cup are competing in Indianapolis this week on the LPGA Tour. ... Former PGA champion Jeff Sluman now has made 1,000 starts on the PGA Tour (700) and the PGA Tour Champions (300). ... Phil Mickelson and Justin Thomas are among those making their first start of the new PGA Tour season at the Safeway Open in Napa, California. ... The BMW PGA Championship at Wentworth was the 16th time Rory McIlroy had opened with a 76 or higher. It was the first time he wound up with a top 10. His previous best after such a start was a tie for 24th at Wentworth in 2011.

Jon Rahm has not finished worse than a tie for 13th in his nine tournaments dating back to the U.S. Open in June.

"Everything that encompasses this event can rival the best of the best on the PGA Tour, in my opinion. I'll tell everyone if they are thinking about coming over here, go ahead and book that ticket." — Billy Horschel after his tie for fourth in the BMW PGA Championship at Wentworth, his first regular European Tour event. 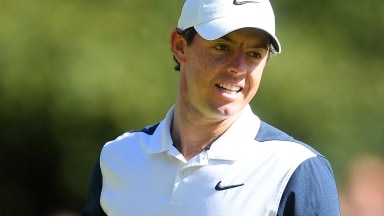 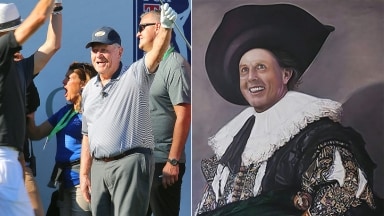 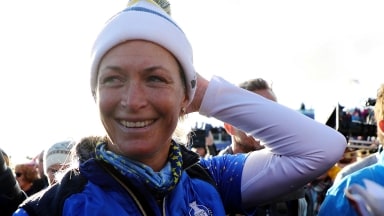 Suzann Pettersen might have been as surprised as everyone else when she decided to announce her retirement upon clinching the Solheim Cup.