Notes: Woods averaging nearly $100K for every round as a pro 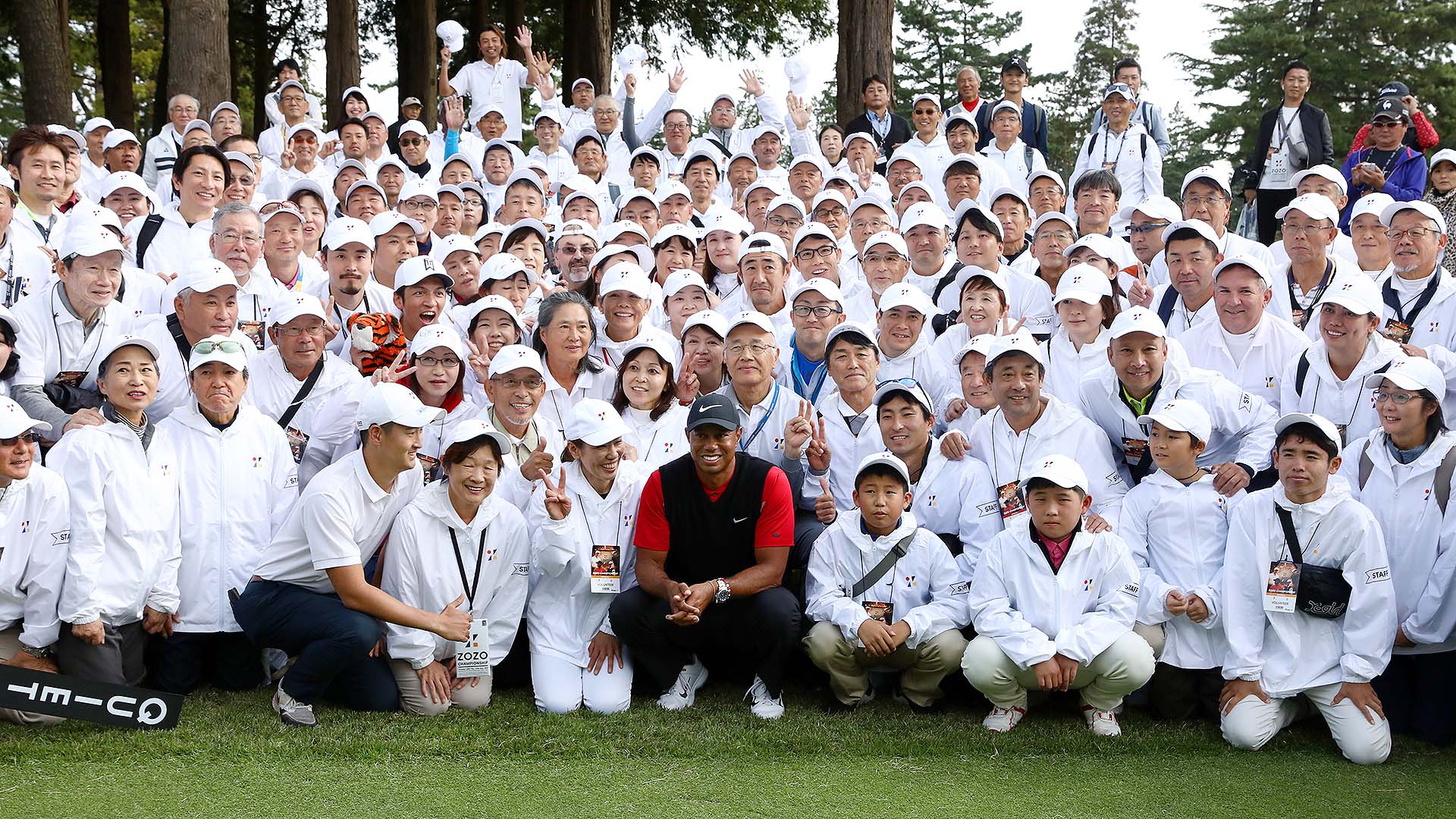 It starts with Tiger Woods, whose victory at the ZoZo Championship in Japan pushed him over $120 million. That comes out to an average of $95,603 for every round he has played as a pro.

Rory McIlroy won the HSBC Champions in China to become the 10th player to surpass the $50 million mark. Sergio Garcia became the ninth player to top $50 million, but only because he finished the final round before McIlroy.

With his tie for 17th in Japan, Paul Casey became the 38th player to surpass $30 million in career earnings.

Jack Nicklaus, who played his final PGA Tour event at St. Andrews in the 2005 British Open, remains at $5.7 million.

Erik Van Rooyen's travels in golf have taken him places he wasn't expecting without ever losing sight of the big picture.

He wants to be among the elite in golf, and the next month could be a big step.

Even with a poor tee shot at the wrong time - the first hole of a six-man playoff - Van Rooyen's tie for second in Turkey moved him to No. 8 in the Race to Dubai standings and No. 51 in the world with two events left in the European Tour season. The first one is this week in his native South Africa at the Nedbank Golf Challenge.

Along with being in the hunt for the Race to Dubai, a strong finish might be enough for him to end the year in the top 50. That would get him in at least three majors, including the Masters, and most likely two World Golf Championships in the spring.

The 29-year-old started the year at No. 141 and cracked the top 100 for the first time with his tie for eighth in the PGA Championship at Bethpage Black. He took another step with a 64-64 weekend to win the Scandinavian Masters.

He would love nothing more than a return to America, where he would surely face more questions about going to college.

How does a guy who grew up across the Outeniqua Mountains from the Indian Ocean wind up at the University of Minnesota?

''The first question everybody asks me,'' he said with a laugh. ''At the time, they were top 30 in the country and I wanted to play for a really competitive school. I enjoyed my four years there. I'd go back. I met my wife - she's from there. I loved it.''

Van Rooyen spent three years on the Sunshine Tour. A playoff victory over Dylan Frittelli in the Eye of Africa PGA Championship gave him enough money to pay for his year on the Challenge Tour in Europe, where he won late in the season to earn a trip to the European Tour.

He made it to the season finale in Dubai as a rookie last year. He made the cut in all three majors he played this year (minus the Masters). His seven top-10 finishes, including his victory in Sweden, have at least given him a chance in the Race to Dubai.

He also did well enough to merit a phone call from Ernie Els, albeit with bad news that he would not be a captain's pick for the Presidents Cup.

''I don't think I'm close to reaching my full potential,'' Van Rooyen said. ''I know guys are younger than me playing good golf. That's OK. I'm on my road. I want to be a top 10 player in the world, whenever that happens. I just want to get as good as I possibly can.''

The playoff loss in Turkey helped more than Van Rooyen.

Right behind him - in the Race to Dubai and the world ranking - was Victor Perez of France, who was part of the playoff. Perez won the Dunhill Links Championship a month ago. Perez also has experience in the U.S. He played his college golf at the University of New Mexico.

Graeme McDowell was the alternate who replaced tournament host Tiger Woods at the Chevron World Challenge in 2009, and it paid huge dividends.

McDowell was just inside the top 50 at the deadline to qualify for the tournament, so he was eligible as an alternate when it was played in early December, even though his world ranking was No. 55.

The field must be among the top 50 for the event to get world ranking points.

McDowell was runner-up to Jim Furyk, which moved him to No. 38 in the world. He was just inside the top 50 at the deadline for an exemption to the U.S. Open, which he won a month later. His first major got him on the Ryder Cup team, and he delivered the winning point for Europe.

Spieth fell to No. 43 this week and is in danger of falling out of the top 50 for the first time in six years. But he is getting one of two sponsor exemptions for the Hero World Challenge in three weeks.

His situation is not that dire. He already is set for the four majors. But the Bahamas will provide a great chance to pick up valuable ranking points before he resumes competition in January.

Five young players from the HSBC junior golf program got quite the surprise last week when in the middle of a competition on the range at Sheshan International, they were suddenly joined by Rory McIlroy, Justin Rose, Ian Poulter, Xander Schauffele and Li Haotong. All took turns coaching a junior and offering some tips.

McIlroy's advice even caught the attention of the pros.

He told his junior to find someone to play against and keep playing until he regularly beats him, even if it's someone he doesn't like.

''I was always the youngest to play, whether it be at my home golf club or in competitions,'' McIlroy said. ''I was always playing with people that were better than me. Even my caddie now, Harry (Diamond), he's basically five years older than me and he was a very good player, and I always played with him. But that made me a better player because I saw what level I needed to get to.''

Akshay Bhatia chose to skip college and turn pro out of high school at age 17, right after playing in the Walker Cup.

He's already getting an education.

Bhatia, who missed the cut in the four PGA Tour events that gave him sponsor exemptions, failed to advance out of the second stage of Korn Ferry Tour qualifying and will have no status for next year. He can receive exemptions or go through Monday qualifying.

Also failing to get out of the second stage was Dru Love, the son of former PGA champion Davis Love III. He has made three cuts in his 15 appearances following his pro debut in the 2017 U.S. Open at Erin Hills.

Among those advancing was Stanford grad Brandon Wu, a co-medalist at his qualifier.

The last two winners of the Mayakoba Golf Classic, Matt Kuchar and Patton Kizzire, won the Sony Open in Honolulu two months later. ... Houston Open winner Lanto Griffin has finished in the top 20 in all six of his PGA Tour events this fall. ... Rory McIlroy now has spent 500 weeks inside the top 10 in the world, making him at 30 years, 6 months the youngest player to do that. Tiger Woods was 30 years, 10 months when he reached 500 weeks among the top 10. Woods turned pro at age 20, McIlroy at 18. ... Kevin Kisner and Corey Conners, who did not get captain's picks for the Presidents Cup, are playing the QBE Shootout hosted by Greg Norman the same week.

''Are you kidding me?'' - Scott McCarron's reaction when Jeff Maggert holed out from 123 yards for eagle in a playoff, a victory that gave McCarron the Charles Schwab Cup.