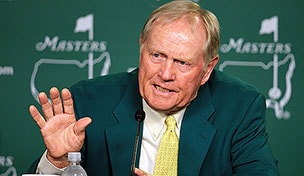 At some point after he won the 1986 Masters, Jack Nicklaus lost two major championships. He's just not sure when.

Tiger Woods has been chasing Nicklaus and his 18 professional majors. Nicklaus was chasing Bobby Jones, only the score was kept differently in his era. Jones was credited with 13 majors – four U.S. Opens, three British Opens, five U.S. Amateurs and one British Amateur.

Along with his 18 professional majors, Nicklaus won the U.S. Amateur twice for a total of 20.

''I was probably at 17 or 18 majors, including the Amateurs, and all of a sudden I had 15 or 16,'' Nicklaus said two weeks ago at the Masters. '''What happened here?' All of a sudden it became 'professional' majors.''

The U.S. Amateur was considered a major when Nicklaus played because ''it related back to Jones.''

''When I passed Jones' record, it was with the amateurs,'' Nicklaus said, referring to the 1973 PGA Championship at Canterbury.

That still was a record-setting major in 1973, for even without the two U.S. Amateur titles, Nicklaus had 12 professional majors, which at the time was one more than Walter Hagen had won.

Nicklaus recalls Browning making a commemorate 20-gauge shotgun after he won the '86 Masters for the last of his majors, playing off 20-gauge and 20 majors. His best guess is that the U.S. Amateur was no longer considered a major, when Woods won it a record three straight times from 1994 to 1996.

PLAYER OF THE MONTH: The PGA Tour award for Player of the Month doesn't get a lot of attention, even though Avis has been donating $50,000 to the winner's charity since it began sponsoring the award in 2012.

Tiger Woods won the award for March, and the surprise was the margin of the fan vote.

Even though he won a World Golf Championship at Doral and the Arnold Palmer Invitational at Bay Hill – the two strongest fields of the month – Woods received only 61 percent of the fan vote on a ballot that included Michael Thompson (Honda Classic), Kevin Streelman (Tampa) and D.A. Points (Houston Open). Streelman was second in the fan voting with 31 percent.

Brandt Snedeker won the award in February, when he was runner-up to Phil Mickelson in Phoenix and won at Pebble Beach. He received 45 percent of the vote, compared with 31 percent for Mickelson and 21 percent for Match Play winner Matt Kuchar.

Brian Gay won the award in January after winning the Humana Challenge. He got 64 percent of the fan vote. Woods, who won at Torrey Pines against the strongest field of the month, finished second with 33 percent.

CLOSING IN: The narrow view of Lizette Salas is that she has struggled to finish off her last two tournaments, either an entire round or one hole. She was three off the lead going into the final round at the Kraft Nabisco Championship and closed with a 79. Then, she shot 62 in the final round in Hawaii to force a playoff with Suzann Pettersen, only to chunk her approach into the water on the first extra hole, allowing Pettersen to win with a par.

The broad view is that Salas is doing everything else right, and that first win might not be too far away.

Salas had only one top 10 in her rookie season last year. Her runner-up finish at Ko Olina was her fourth top 10 this year, and she is seventh on the LPGA money list with $348,463, already more than $100,000 over what she made all of last year.

Even better, she is No. 7 in the Solheim Cup standings.

''I just want to win,'' said Salas, the daughter of Mexican immigrants. ''I don't play here just to travel the world. I'm here to win championships, and I'm here to change the world of golf. So if people have something bad to say, then they can say it to me. I'll gladly take criticism. But that's not going to stop me from achieving my goals. I'm here to fight, and that's why I went to USC. We fight on.''

Salas was a four-time All-American for the Trojans and played on their 2008 NCAA title team.

TWO MORE MEMBERS: As much as he loves the American style of golf, Matteo Manassero of Italy isn't in a big rush to try to join the PGA Tour. He is in his fourth year on the European Tour, though he just turned 20 on Friday.

''I want to be comfortable in the top 50 in the world,'' Manassero said at the Masters. ''That gives you more chances to be invited to tournaments. And it would have to be a year in which you start well and then can play more.''

Manassero, who already has three European Tour wins, played reasonably well in America, though not enough to make up much ground. He lost in the opening round of the Match Play Championship, tied for 29th in the Honda Classic and tied for 23rd at Doral, before missing the cut at the Masters.

He needs to stay in the top 50 this week to get into The Players Championship.

Meanwhile, two Europeans who fared well early have taken up special temporary membership. Thorbjorn Olesen of Denmark made it to the second round of the Match Play, tied for seventh at Bay Hill and tied for sixth at the Masters. That has given him $632,300 in five starts. Gonzalo Fernandez-Castano of Spain reached the third round of the Match Play and tied for third at Bay Hill, which helped him accrue $592,020 in five starts.

Both can receive unlimited sponsor exemptions for the rest of the year. Olesen is No. 34, and Fernandez-Castano is No. 31 in the Official World Golf Ranking.

DIVOTS: Jordan Spieth has all but locked up his PGA Tour card for next year. With his tie for ninth at Hilton Head, the Texas teenager has earned $662,398. A year ago, with four extra tournaments on the schedule, Kevin Chappell finished 125th on the money list with $647,510. ... Three tournaments do not make a slump, but it's enough to draw attention to Hunter Mahan. He missed the cut at the Houston Open and the Masters – an 82 on Friday at Augusta National – and missed the 54-hole cut at Hilton Head, when he followed his opening 68 with rounds of 76-78.

STAT OF THE WEEK: Ryo Ishikawa has played 76 tournaments in the last two years, the most of anyone among the top 200 in the world.

FINAL WORD: ''Having the people stand up and clap for you when you come on the last green, that's stuff I'd only seen on TV.'' – John Peterson, on playing in the Masters.