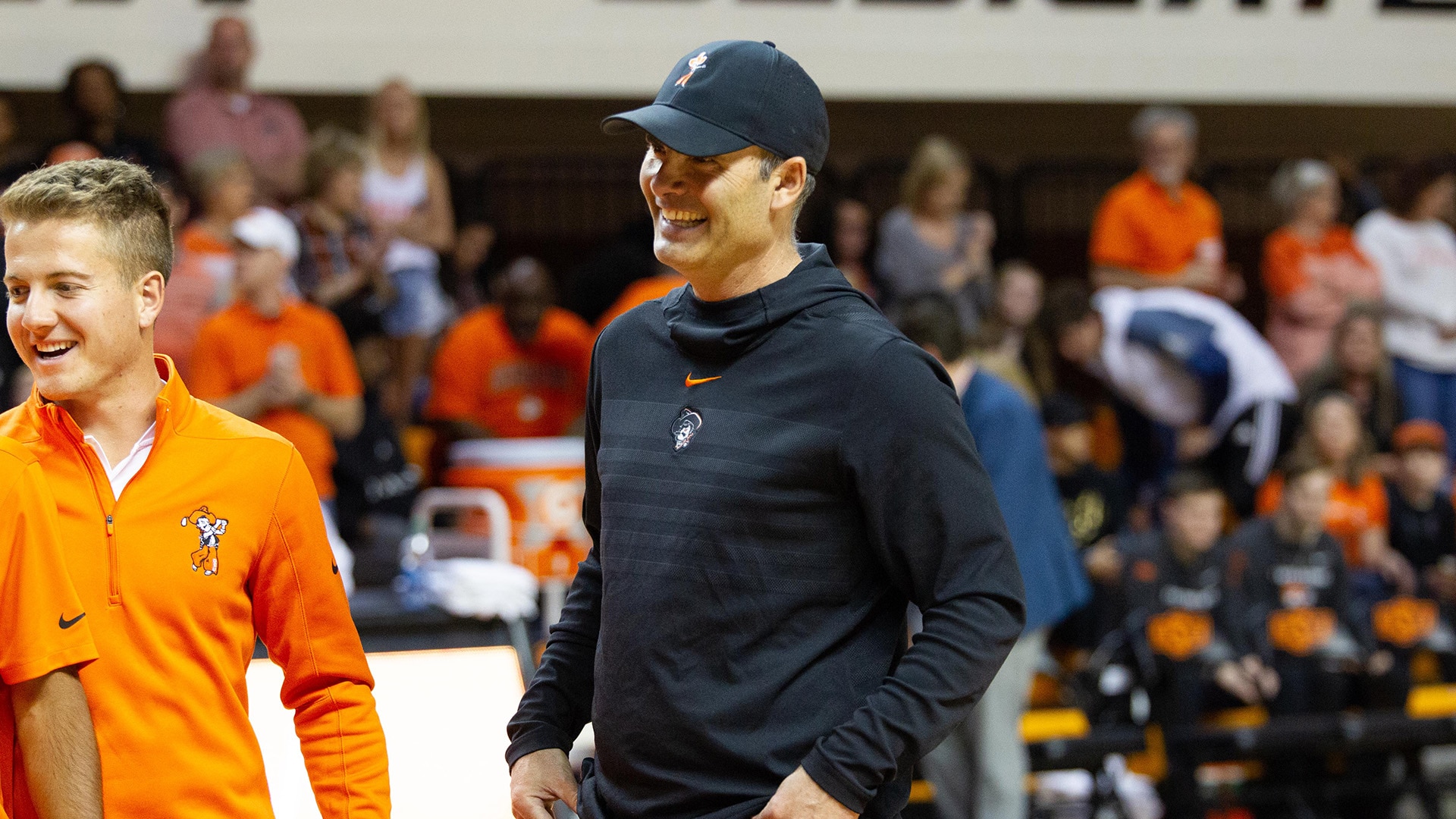 In his first day back to work following a six-week stay in Houston undergoing chemotherapy and radiation, Darr worked nine hours. Last week at regionals, Darr refused a cart despite being less than a month removed from an eight-hour colectomy in which surgeons removed a cancerous tumor and 20 lymph nodes.

And as the top-ranked Cowboys chase a second straight national title at this week’s NCAA Championship, Darr is determined to coach as normal for what could potentially be a taxing seven rounds in six days at massive Blessings Golf Club.

“I’ve been like his wife at work, trying to get him to rest,” Bratton said. “But he loves coaching and cares so much about these kids and this team. He’s really been selfless, just going about his business as if nothing has changed. He’s been quite the inspiration.”

A year ago, the Cowboys were on the top of the world as they celebrated an 11th NCAA title in front of their home fans at Karsten Creek. They returned to action last fall again as the team to beat and won twice while sophomore Matthew Wolff and junior Viktor Hovland combined to win five times.

Then came the devastating news.

Darr, a husband and father of four who for months, was diagnosed with stage-3 colorectal cancer on Dec. 13. Darr had battled Rocky Mountain spotted fever from a tick bite early last year but still wasn't feeling well by the end of the fall. A colonoscopy revealed a tumor the size of a golf ball.

“It was shocking because you don't really think anything can really faze him,” Hovland said.

For years Darr had coached his players to stay strong in the face of adversity. Now, looking at a 10-month treatment plan that would take him away from coaching for extended periods of time, it was his turn to find that courage.

Said Darr: “It’s not always going to be easy but how you respond to that is what matters. What was I supposed to do, just give up? They tell you have cancer; you better figure out how you’re going to win.”

Darr began treatment on Jan. 14 at MD Anderson in Houston. In addition to the physical demands the chemo put on his body, Darr was tested emotionally as he spent nearly two months away from his home in Stillwater. While his wife, Tina, was with him most of the time, many of those days were spent away from his children, Allie, Anna, Leo and Lucy.

It was lonely at times, Darr admitted, but he also found the hospital to be quite inspiring. He was spurred on by seeing other people, including women and children, fight harsher cancer battles. The support – phone calls, texts, emails, cards – was overwhelming, too.

“You never really know what it means to somebody when you tell them that you’re praying for them until you’re the person that people are praying for,” Darr said. “You gain a lot of strength from that.”

Nothing, though, could compare to the injection of energy Darr received by returning home. When he got back to Stillwater, Darr immediately jumped into a routine that typically included four- to five-hour days at Karsten Creek, meeting with Bratton, lunch with the players and some time out on the range and course – all before heading home exhausted.

“Just being around Alan and the guys totally changed my perspective, gave me the spring in my step that I needed,” said Darr, who was recognized at an Oklahoma State men’s basketball game on March 9, where players and coaches wore warm-up shirts with #PrayForeDonnie and the Swinging Pete logo on them. Later that month, during an NCAA Tournament game in Tulsa, he received his national-championship ring during halftime.

“When I have an opportunity to be around them and do what I love doing, it puts me in a better mood where I’m more upbeat and feel like I can do things that I can’t do when I’m sitting in a room by myself.”

Shirts that were made for @OSUCowboyGolf assistant Donnie Darr earlier this spring. pic.twitter.com/0xMyDLV9BA

Darr’s first tournament back was the ASU Thunderbird Invitational on April 12-13. He was slated to return in mid-March for the Valspar Collegiate, but didn’t make the trip because of the death of his mother-in-law, who had been diagnosed with brain cancer last summer, and the team’s next event, the Aggie Invitational, was cancelled.

Instead, Darr, in his fourth year back with the Cowboys (he previously served as the assistant from 2006-09 before taking the head job at Ohio State), assumed head-coaching duties in his return as Bratton was with Hovland at the Masters. The Cowboys finished fourth in Phoenix and returned home that same night.

Three days later, on April 16, Darr had his surgery in Houston. During the procedure, doctors installed an ostomy bag. More importantly, they found no living cancerous cells in his colon, a discovery that will make this summer less strenuous.

“It changes my treatment plan,” Darr said. “I was originally going to do two types of chemo at the same time. It was going to pretty much make for a long, sick summer.”

Darr will now only do four months of oral chemo. A follow-up surgery to reverse the ostomy bag is planned for November. Until then, he will be free to coach, though he’ll have to be smart, drinking plenty of water to avoid dehydration and saving his steps to combat fatigue.

“I can’t waste them on the driving range,” Darr said. He needs them for the actual tournament.

Impressively, Darr missed only one event after surgery, the Big 12 Championship, which the Cowboys won for the first time since 2011 before heading to Louisville, Ky., for regionals, which the team also won.

“Having him back has given us that little extra kick,” Bratton said. “He led us to victory last week at regionals, so I think these guys will keep that going.”

All spring, Oklahoma State has donned Darr’s initials on its hats and golf bags. The Cowboys also wear daily a rubber bracelet, given to them in Cabo, that says, “We are all OSU today #CoachDarr.”

“It just puts everything in perspective, how blessed we are to be out here,” Wolff said. “I had a tendency to kind of whine and moan last year and we've gotten a lot better, but whenever you get down on yourself or think that there's nothing else other than golf, kind of just makes you realize … you could be doing a lot worse things.

“We're out here, we're just playing the game that we love with all of our friends. We're competing. It literally couldn't get any better than this.”

Especially with Darr by their side, walking the fairways, helping lead his Cowboys toward another championship.