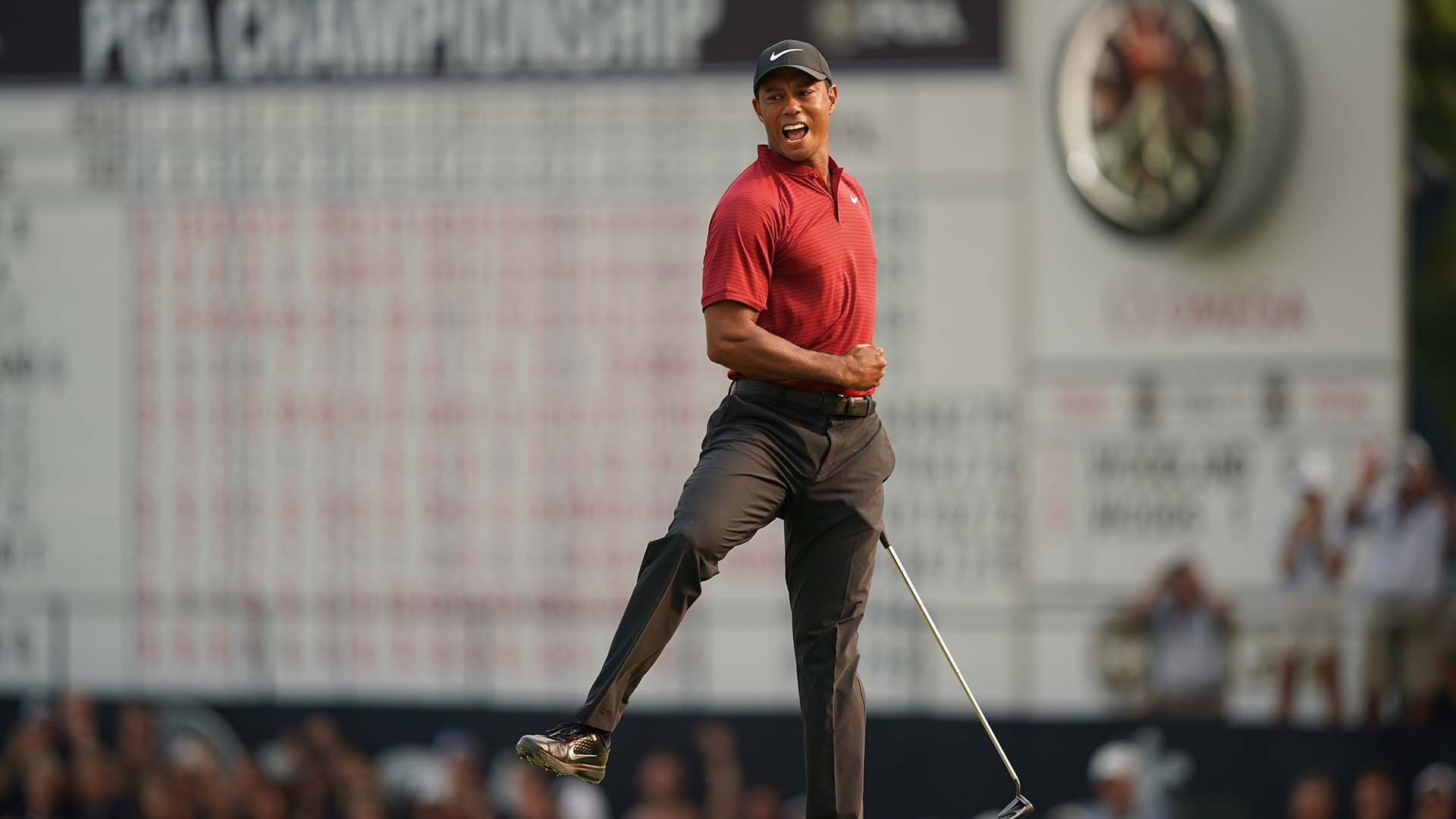 Despite a week at his own Hero World Challenge he’d rather forget, Woods walked off the course at Albany, the same layout where he began his comeback last December following multiple back procedures, content to have reached the finish line.

Woods covered a lot of ground in the last 12 months, hitting 5,297 official shots on the PGA Tour during that span. Here’s a look at the 18 most important (not the best) shots he took in 2018.

No. 1. For Woods his second shot at the par-4 10th hole on Sunday at Carnoustie was the year’s best, a towering wedge shot that set up a two-putt par with Tiger clinging to a one-shot lead.

No. 2. This was a learning moment for Woods (remember, these aren’t the best shots he hit, just the most important). One stroke off the lead on the 72nd hole at the Valspar Championship, Woods hit iron off the tee into the left rough on his way to a runner-up finish.

In retrospect, Woods acknowledged last week in the Bahamas that he wasn’t ready to win that early in his comeback, and that closing shot showed a weakness that he needed to address.

No. 3. Although he’d played well and contended before arriving at Muirfield Village, Woods’ third shot on Friday at the par-5 11th hole at the Memorial produced the kind of electric moment that everyone had been waiting for. Woods’ ball landed about 10 feet past the hole and spun back into the center of the cup for eagle.

“I got it down in the fairway and I had 97 yards, which is normally a 60 degree sand wedge for me, but it was perfect with that slope there,” he said at the time. “I could just take off about 15 yards on the 56 [degree wedge] and just hit a little dead one in there and not have it rip back and it worked out perfectly.”

No. 4. It was another learning moment just a week after the Valspar Championship. Woods’ drive at the 16th hole during the final round at Bay Hill sailed wildly left and out of bounds, unceremoniously ending his title push.

No. 5. OK, it was a silly event defined by largely boring golf, but Woods’ chip in at the 17th hole during The Match: Tiger vs. Phil earlier this month was quintessential Tiger. Woods squared the match with his birdie.

“Absolutely I felt pressure,” Woods said of the chip in. “It was a must-make chip to have a chance to not have it on Phil's putter there. To be able to hole this chip felt good.”

No. 6. Although he’d end up finishing 17th in the 18-man Hero World Challenge on Sunday, there were some highlights like his second shot (a 3-wood) at the par-5 11th hole on Friday that landed perfectly on the green before racing through the putting surface.

“I told him it was the best shot he hit all year,” said Woods’ caddie Joey LaCava. “It barely rolled off the green. It was something.”

No. 7. There were so many crucial shots on Sunday at the Tour Championship, where Woods would win his 80th Tour title, but his chip from behind the green at the 17th hole stands out. From a difficult lie Tiger chipped to 3 ½ feet and converted the par putt to maintain a two-stroke lead.

“That putt on 17 was a lot bigger than people think,” he said. “At the time I could have dropped down to a one-shot lead playing the last hole. But a two-shot lead playing a par-5 which I can hit driver-iron to, that's a totally different ballgame.”

No. 8. With a massive crowd cheering him on, Woods rolled in a birdie putt on the 72nd green to finish with a 64 and a 14-under total at the PGA Championship. Tiger would finish two shots behind Brooks Koepka in second place but his finish was the kind of clutch performance that had been missing from his game.

“Making that putt at least gave me a chance,” Woods said.

No 9. Although he finished tied for 11th place at The Players Championship, Woods showed flashes of the game that had been gone for so long, including his signature stinger shot on TPC Sawgrass’ 18th hole that carved perfectly on Sunday into the fairway.

“I hit it so good. It was nice. I had control of it from tee to green,” Woods said.

No. 10. Throughout Woods’ comeback the one part of his game that remained consistently solid was his iron play, and his 3-iron from 230 yards at the 16th hole, which set up a tap-in for eagle, during the first round of the BMW Championship was Tiger at his best.

No. 11. It’s worth noting the shot he didn’t take at Patrick Reed after the American caused something of a mini-revolution with his comments following the Ryder Cup. Woods easily slipped on a new hat as captain of next year’s U.S. Presidents Cup team and handled the matter.

“We spoke after the Ryder Cup for a long period of time and, you know, we talked amongst us and it will stay between us,” Woods said last week.

No. 12. Although he’d missed a good look at birdie, Woods’ tap in for par at the 72nd hole secured him a tie for sixth at The Open, which was enough to qualify him for the WGC-Bridgestone Invitational. Woods had made it clear how badly he wanted to play the final World Golf Championship at Firestone, where he won eight times.

No. 13. Playing catch up on Sunday at the PGA Championship, Woods pulls his drive left of the ninth fairway at Bellerive but makes an exceedingly difficult approach look easy and converts the 12-footer for birdie.

“[Woods’ second shot] was basically off the cart path from a hanging lie, he hit it in there 12 feet and on top of that it was a tricky read [on the putt] and he poured it right in the middle,” LaCava said.

No. 14. His first tee shot at the Farmers Insurance Open in January was nothing to brag about, a pull into the thick rough left of the first fairway on the South Course, but it was significant because it marked Woods’ return to official competition on Tour and his tie for 23rd served as the first sign that he could compete again at the highest level.

“It was a struggle out there,” he said of his first round. “I didn’t hit it worth a darn all day. I was really struggling trying to find anything that was the resemblance of a golf swing. But I was scoring. I was chipping, putting, I was grinding.”

No. 15. There have been so many highlights for Woods in his career at Firestone they all seem to run together, but his 50-footer for birdie on the 18th hole on Thursday put the finishing touches on an opening 66 for his lowest round in Akron, Ohio, since 2003.

No. 16. Woods explained that Carnoustie was a turning point for him because he proved to himself he could still compete in majors. It also served as a clear indication of what he needed to improve, like when his approach into the 11th hole sailed long and he tried to do too much with his next shot from an awkward lie on his way to a double bogey.

No. 17. There wasn’t a particular shot but the moment was significant when Woods set out with Mickelson for a practice round on Tuesday at the Masters. For so long the two had been seen as aloof contemporaries but the Masters tune up seemed to indicate a new dynamic in the duo’s relationship.

“Our friendship has gotten stronger over the years,” Woods said.

No. 18. It was just a tap-in for par – following a missed 10-footer for birdie, no less – for a round that added up to 73 strokes and a second-to-last-place finish at the Hero World Challenge, but for Woods it was a chance to complete the circle.

“This entire year has been amazing,” Woods said on Sunday. “Just been so blessed to have the opportunity. To come from where I came from last year at this point to have the ability to actually play and compete again in the game and do it consistently is quite amazing.”

Woods covered so much ground in 2018 and his final round in the Bahamas finally closed what was competitively the most compelling chapter of his career.