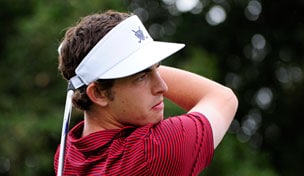 SAN FRANCISCO – According to multiple sources familiar with the situation, amateur Patrick Cantlay plans to turn professional after this week’s U.S. Open, although the 20-year-old said on Sunday at The Olympic Club that he has not made a decision.

“I haven’t really decided yet,” said Cantlay, who was tied for 42nd at 11 over par after he shot a closing-round 72 at the Lake Course. “It’s a family matter so I’m going to sit down with my mom and dad and my swing coach … it’s a tough decision.”

Cantlay, 20, who recently completed his sophomore season at UCLA and was runner-up at last year’s U.S. Amateur, is playing next week’s Travelers Championship and is scheduled to hold a news conference at 3 p.m. ET on Tuesday at TPC River Highlands.

Despite Cantlay’s denial, sources say he plans to sign with Tiger Woods’ manager Mark Steinberg with Excel Sports Management. GolfChannel.com asked Steinberg about his relationship with Cantlay Sunday at Olympic and he declined to comment.

With dramatic changes to the PGA Tour’s Q-School and Nationwide Tour system looming it’s likely that many underclassman will bolt school early, but Cantlay’s longtime swing coach Jamie Mulligan warned that no decision has been made.

“We will finish up this week and evaluate, but he hasn’t decided anything. He would never do that here (at the Open). Never take away from this championship,” Mulligan said.

If Cantlay turns pros this week he will be able to accept six sponsor exemptions and will have a maximum of nine starts as a non-member. If he earns enough in those starts to equal the amount made by No. 150 from last year’s money list ($411,943) he will earn special temporary status and have unlimited sponsor exemptions.

Players normally declare whether they are playing as a professional or an amateur on their entry form when they register, although a Tour official told GolfChannel.com a player could wait until Thursday to make the decision if they wanted to.

As an amateur, Cantlay tied for 47th at this year’s Masters and missed the cut at the Northern Trust Open.