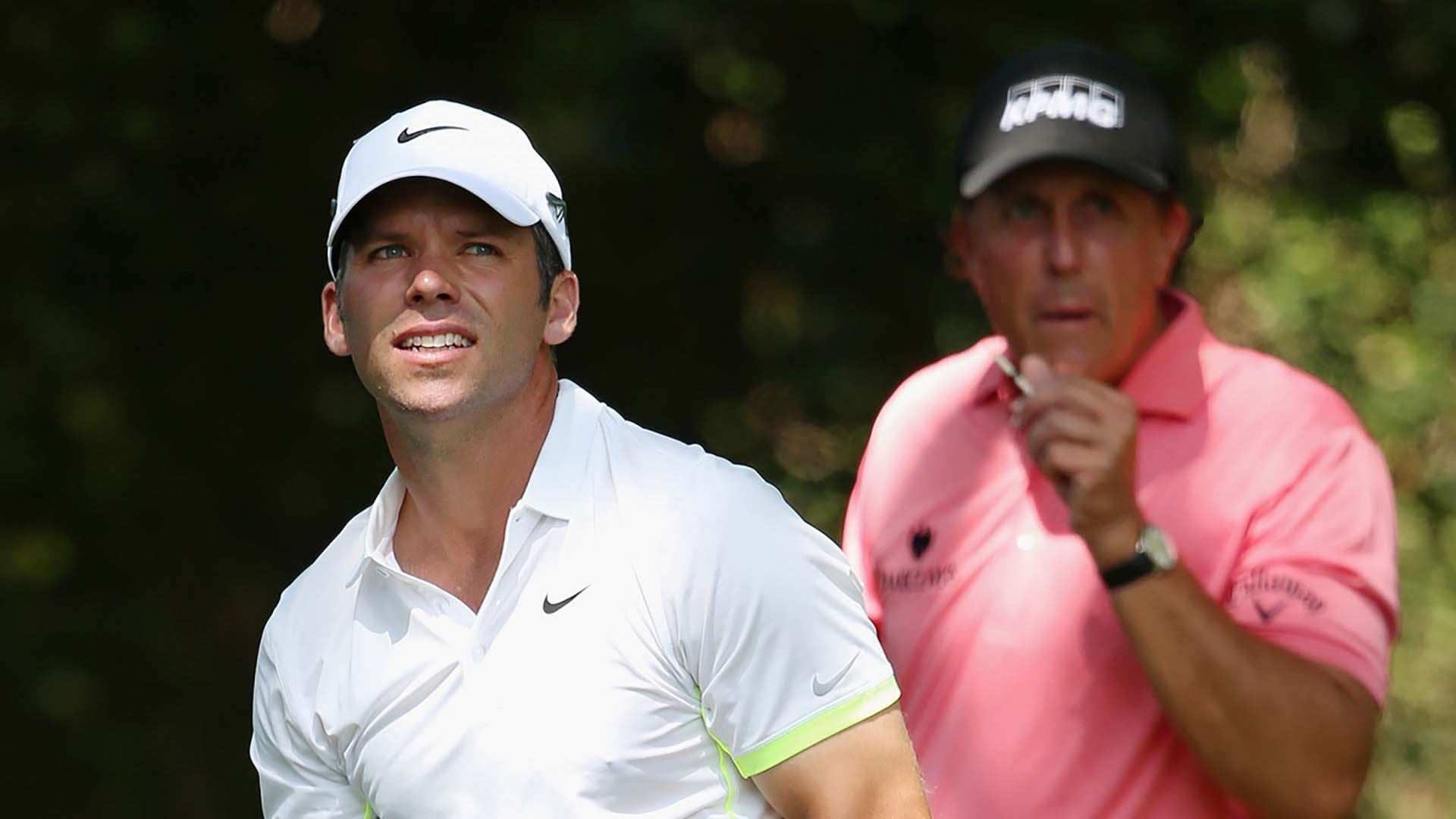 PEBBLE BEACH, Calif. – Paul Casey didn’t play the Saudi International last week, but he might have come out as the real winner because of the stand he took.

Casey also won much admiration for the statement he made.

Fellow PGA Tour pro Nick Watney told him as much when he saw Casey in the players’ lounge at the AT&T Pebble Beach Pro-Am early this week.

“He goes, 'I think you won last week,’” Casey said. “It’s not about that, obviously, but it did make me chuckle.”

Casey moved in position to win a tournament on Sunday at the AT&T Pebble Beach Pro-Am. With his round of 5-under 67 at Spyglass Hill on Saturday, Casey moved to the top of the leaderboard.

At 15 under overall, he took a three-shot lead on Mickelson, who posted 70 at Pebble Beach. They’ll be paired together in the final round. Casey is four ahead of Scott Piercy (69) and Lucas Glover (70), and five ahead of Brian Gay (69) and Matt Every (69).

Casey announced he wasn’t playing the Saudi International in an Instagram post, where he was photographed standing with his arms crossed next to his golf bag, which carries the logo of UNICEF, the United Nations International Children’s Emergency Fund.

Casey is a UNICEF ambassador and one of the countries the organization is focused on is Yemen and the toll a Saudi Arabian-led military intervention has taken on children in that country.

While Casey didn’t seem comfortable taking fellow tour pros to task for playing in Saudi Arabia, he didn’t back down.

He wouldn’t have made the long-distance trip to California.

If Casey is going to win, he will have to hold off a player who has thrived on the Monterey Peninsula.

Mickelson can put a down payment on Pebble Beach Golf Links with a win tomorrow.

Mark O’Meara owns this place, in terms of the kind of land titles tour pros claim winning an event more than anyone else. He has won this tournament a record five times.

With a victory Sunday, Mickelson will equal O’Meara’s mastery of the event.

It won’t be easy the way Casey is playing.

“He’s going to be tough to catch no matter what,” Mickelson said

Why does he play so well here?

“The challenging conditions often time comes into play,” Mickelson said. “I think the grass, and the little half shots to get back to some of these pins, a lot of guys struggle with, and it's been a strength of my game. So, I've been able to make a few more birdies on some of these holes.”

Casey, 41, who has membership on both the PGA Tour and European Tour, is seeking his third PGA Tour title, but his first holding a 54-hole PGA Tour lead. He’s 0 for 3 trying to do so.

Mickelson was asked if all his success will give him an advantage.

“I'm not sure that it will be much of a factor,” Mickelson said. “But the fact that I've had good rounds here, especially on the final round, gives me some confidence going into tomorrow, but it doesn't really help today. You still have to go out tomorrow morning and execute.”