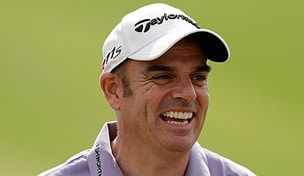 ABU DHABI, United Arab Emirates – The players have spoken, or maybe it was Twitter. Either way if the consensus is to be believed, the European Tour’s Tournament Committee’s decision to name Paul McGinley the 2014 Ryder Cup captain was the right one.

Not that the final decision to send the first Irishman into the captaincy was as easy as all that.

After weeks of speculation, politicking and . . . well, tweeting, the final debate came down to two players – McGinley and Colin Montgomery. In the end, the Tournament Committee needed about an hour to decide that McGinley was the right man to lead the Continent at Gleneagles in Scotland.

“To be honest it’s a very humbling experience to be sitting in this chair,” said McGinley, who is undefeated in three turns as a Ryder Cup player and two as a vice-captain.

Images: McGinley through the years

But it wasn’t that legacy that seemed to push the 10 Tournament Committee members to vote for the Irishman - five members either were not at the meeting - or were candidates for the job and abstained from voting. In the end it was the 46-year-old’s successful stint as the captain of the 2009 Seve Trophy, a Ryder Cup-like team event between players from the United Kingdom and the Continent.

It was during those matches that Rory McIlroy was first exposed to team play as a professional, and where he learned firsthand how good of a captain McGinley was.

“He made me feel so confident,” said McIlroy, who made a cameo at the late-evening announcement to congratulate the new captain. “I enjoyed playing under him the most. He builds you up and makes you feel like you can do anything.”

But McGinley hadn’t felt invincible the last few weeks. In fact, he compared the give and take of this year’s selection process to being a yo-yo.

Late last year Darren Clarke, one of the leading candidates for the ’14 job, suggested he planned to withdraw his name from consideration and offered his tacit support for Montgomerie, who captained the 2010 European team to victory.

Some considered the move a reaction to the PGA of America’s decision last month to name Tom Watson the ’14 captain and Montgomerie, who owns a home a few miles from Gleneagles, seemed to gain momentum when he said he would take the job if it were offered to him.

That support, however, seemed to wane as many tops players – including world No. 1 McIlroy, Graeme McDowell and Ian Poulter – threw their support in McGinley’s favor on Twitter and in the media.

One Tournament Committee member told GTC on Tuesday that reacting to what the U.S. does is not how Europe has built a dominant record in the biennial matches (Europe has won seven of the last nine cups) and many players, including McIlroy, felt the captaincy was a one-time deal.

It also helped that throughout the entire affair McGinley, who is 2-2-5 in Ryder Cup play, maintained a dignified silence.

“It’s amazing what you can learn when you listen and don’t talk,” McGinley said. “I felt the more I’d say the more my chances would lesson.”

The decision was unanimous despite the controversial buildup and the players got who they wanted.

“The committee is 100 percent behind this captain and that was obvious early in the meeting,” said Thomas Bjorn, the Tournament Committee chairman. “We listen to our players.” 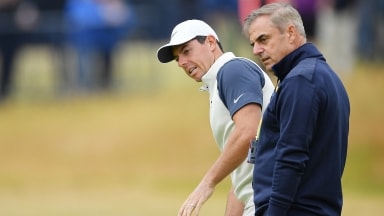 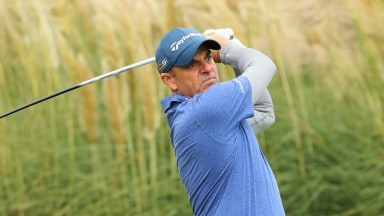 Former Ryder Cup captain Paul McGinley believes the "noise" surrounding his round with Donald Trump may distract Rory McIlroy as he prepares for the Masters.

According to Paul McGinley, a new European Ryder Cup captain will be named by Christmas.