The PGA Tour Canada (Mackenzie Tour) and PGA Tour Latinoamerica circuits are expected to begin their official seasons in the next few months, while the PGA Tour China season has been canceled for 2021 because of the ongoing uncertainty surrounding the coronavirus pandemic.

“We remain committed to the region and want to do everything we can to give competitive opportunities for players in Asia and from the Pacific Rim,” said Greg Carlson, PGA Tour Series-China’s executive director. “We are trying to pursue other opportunities for our players to play in 2021. We will also take this pause and evaluate what we might be able to do in 2022.”

After canceling its 2020 season, the Mackenzie Tour is opening registration for its 2021 qualifying tournaments, six of which will be played in the U.S. The Canadian border is currently closed to non-essential travel, but the tour is hosting qualifiers now in anticipation of those restrictions potentially being lifted before the circuit begins its season in late May. The tour will announce specific tournament dates and sites “in the near future,” according to a release, but it should play its official season through mid-September.

The remainder of the PGA Tour Latinoamerica schedule will be released in the next few weeks, with the season expected to restart in March and end in mid-June. The wraparound 2020-21 schedule resumed last month following an eight-month break. 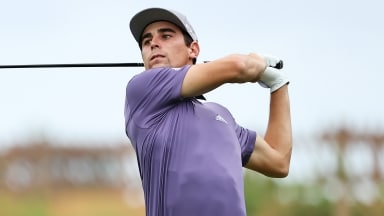 Playing for cousin, Niemann 1 back at Mayakoba

Joaquin Niemann is playing for more than himself this week at the Mayakoba Classic.