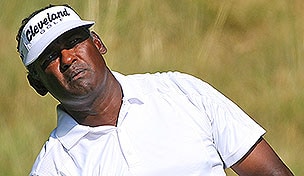 Although Vijay Singh’s prepared statement regarding his use of the Ultimate Spray – an extract from deer antler that contains IGF-1, which is banned under the PGA Tour’s anti-doping policy – suggests a certain amount of legal latitude, the reality is there appear to be few options for the circuit under the current policy.

“While I have used deer antler spray, at no time was I aware that it may contain a substance that is banned under the PGA Tour anti-doping policy,” Singh said in the statement. “In fact, when I first received the product, I reviewed the list of ingredients and did not see any prohibited substances. ... I have been in contact with the PGA Tour and am cooperating fully with their review of this matter.”

But under the dogmatic rules of anti-doping, ignorance is no defense. Whether he knew IGF-1, which is what HGH is converted into by the body, was on the circuit’s banned list is not a consideration in determining Singh’s guilt, although it could mitigate the Fijian’s punishment.

According to the Tour’s policy, which was initiated in 2008, a player’s first doping violation can result in a suspension up to one year, although Tour commissioner Tim Finchem “may depart from the sanction guidance ...  as he deems appropriate in a particular case.”

Unlike all other fines and punishments doled out by the Tour, a violation of the circuit’s anti-doping policy is made available to the media and public. According to the policy, “In each case where a period of ineligibility has been imposed or tournament results have been disqualified, the PGA Tour will, at a minimum, publish the name of the player, the anti-doping rule violation, and the sanctioned imposed.”

The exception to that rule is violations that involve “drugs of abuse” or recreational drugs like marijuana.

In 2009, Doug Barron was suspended for one year after he tested positive for testosterone and beta blockers, which were both prescribed by his doctors for health reasons but a violation of the policy nonetheless. On Nov. 4, 2009, the Tour and Barron’s lawyers released a statement regarding his suspension simultaneously.

Complicating matters for Finchem and the Tour is that although HGH and IGF-1 have been on the banned list since the circuit began testing they do not test for either substance. Like most other professional sports the Tour does not require blood tests which is the only way to test for HGH and IGF-1.

Although the anti-doping policy has numerous layers for review and appeals of positive tests, Singh’s statement would seem to preempt the normal vetting process for positive tests.