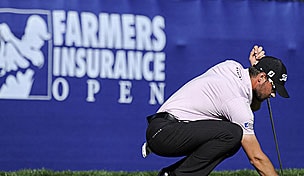 SAN DIEGO – Two big news days are poised to unfold before the first tee shot is hit Thursday at the Farmers Insurance Open.

Tiger Woods meets the media Tuesday at 1 p.m. ET in his 2013 PGA Tour debut, but he might just be the warm-up act to the real fireworks show with the first PGA Tour players’ meeting of the year set for 8 p.m. ET at Torrey Pines. A showdown over the U.S. Golf Association’s proposed ban of anchored strokes is the priority agenda item.

On Wednesday, Phil Mickelson appears poised to spark another debate, this one over tax codes. He will take center stage in the media room after his pro-am round. Mickelson’s news conference ratcheted up in importance when he indicated Sunday that he was going to unveil “drastic changes” in his life as a reaction to new tax burdens.

Tuesday’s players’ meeting will help shape the PGA Tour’s reaction to the USGA ban on anchoring.

“I don’t know what’s going to happen, but it should be fun,” said Jeff Gove, a member of the PGA Tour Players Advisory Council.

USGA executive director Mike Davis will address the players Tuesday evening, not all of whom are happy with his organization’s proposal to ban anchoring putters.

“It’s going to get really ugly,” Brendan Steele said last month when asked about the meeting. “People don't understand that there's going to be a lot of turmoil within the Tour. Guys with belly putters are kind of taking names of the guys that are kind of having a celebration that use short putters . . . There's going to be some words.”

The proposed ban isn’t scheduled to take effect until 2016, but the PGA Tour could make it mandatory before that.

Whether the PGA Tour accepts the USGA’s proposed ban, or wants to enact the ban earlier, or decides to create its own rule and continue to permit anchoring will ultimately be determined by the PGA Tour’s Policy Board.

The 16-player PAC will convene immediately after Tuesday’s players’ meeting. The board isn’t expected to act until later this year.

Count Brandt Jobe among players who don’t like the idea of waiting three years before a proposed anchor ban takes effect.

“I think if they’re going to make a rule, make it and let’s move on,” Jobe said. “Let’s just get some clarity and move on.”