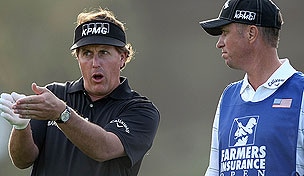 Well, at least for some people.

When Phil Mickelson made the turn in the opening round of the Waste Management Phoenix Open at 7-under 29, then birdied the first hole of his back nine, he and longtime caddie Jim “Bones” Mackay were thinking the same thing. But neither one talked about it.

It was clear at that point that Mickelson had an opportunity to post a sub-60 score – perhaps even the first score of 58 or better in PGA Tour history – but neither one of them brought it up.

“It’s a little bit like a baseball pitcher when he has a no-hitter going,” Mackay said with a laugh. “I was just handing him the putter and getting away from him.”

“I don't mind bringing it up,” Mickelson contended. “I don't mind even saying something, but we didn't really bring it up. I'm not superstitious that way. I don't mind talking about it, because I was sure thinking it.”

Mickelson wound up making par on four of his last five holes to shoot an 11-under 60.