Mickelson at his scrambling best 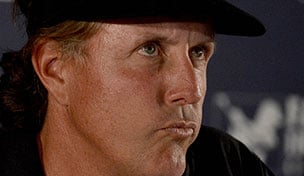 SAN DIEGO – This great escape ranked right there with Phil Mickelson’s shot between the trees at the 13th when he won the Masters three years ago.

Nobody gets themselves out of jams quite so cleverly.

Mickelson reinforced that by pulling off yet another brilliant recovery Wednesday at Torrey Pines, this time without hitting a shot.

A day after apologizing for complaining about the tax rate he’s facing as a California resident, Mickelson got himself up and down from a public relations mess.

He did it with candid wit and self-effacing humor while not evading a single question in his news conference.

Check out more news and video from the Farmers Insurance Open

Remember what Mickelson said after he lost the U.S. Open hitting that last drive off a hospitality tent at Winged Foot in 2006?

Without using those exact words again, Mickelson brought them to mind comparing his tax complaints with the errant drive that cost him the U.S. Open.

He said his mistake talking about taxes soared in another direction.

“This happened to be way right,” Mickelson said.

The punch line drew a hearty laugh in the media room. He built on that just three days after he said his new tax burden will force him to make “drastic changes” in his life, sparking speculation he would move to another state, or that he might even retire.

Whether you think Mickelson should have apologized or not, he believed it was necessary. He believed he was taking advantage of his privileged lot in life.

“My apology is for talking about it publicly, because I shouldn’t take advantage of the forum that I have as a professional golfer, to try to ignite change over these issues.

“I think it was insensitive to talk about it publicly to those people who are not able to find a job, that are struggling paycheck to paycheck.”

Mickelson never asked reporters to change the subject. The first 12 questions were about the furor his tax comments caused.

Asked directly again how he feels about his tax bill, Mickelson steered clear of trouble.

Is he still considering leaving California, where he was born and raised and still resides?

“We have talked and will continue to talk to the best tax advisors. I love this state. I grew up here. I love it here, and I’m certainly concerned about it.”

The furor has overshadowed the fact that Mickelson is returning home to the event and course where he won his first event as a professional. It’s the 20-year anniversary of his winning the Buick Invitational. Mickelson said he is accustomed to having created distractions for himself.

“I’ve said some stupid things in the past that have caused a media uproar before,” he said. “It’s just part of the deal. One thing I’ve prided myself on is whatever it is I’m dealing with in my personal life, once I get inside the ropes, I need to be able to focus on shooting a low score.”

Mickelson was asked what his “next dumbest” comment was that caused him trouble.

That was his famous quip that he believed Tiger was miffed that he was driving it past him with his new equipment, and that Tiger was playing with “inferior” equipment.

“What a dumb thing that was,” Mickelson said. “I’m sure we can think of some other pearls over the years.”

As mea culpa’s in golf go, Mickelson’s was impressive.