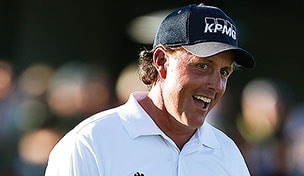 In case there were any questions about Phil Mickelson's prowess with a lob wedge, the four-time major champion answered them once again in a recent trick-shot video with Roger Cleveland, chief club designer at Callaway Golf.

In a re-enactment of a shot he performed with Dave Pelz several years ago, Mickelson demonstrates exactly how to play a successful flop shot – all while Cleveland stands three feet directly in front of him. Without hesitation, Lefty strikes a shot that barely clears the top of Cleveland's head before heading toward the green.

Check out full video of the shot below, which also includes tips from Mickelson on how to execute the flop shot effectively: