Phil Mickelson makes it 2-for-2 on Champions, defeats Mike Weir in Virginia 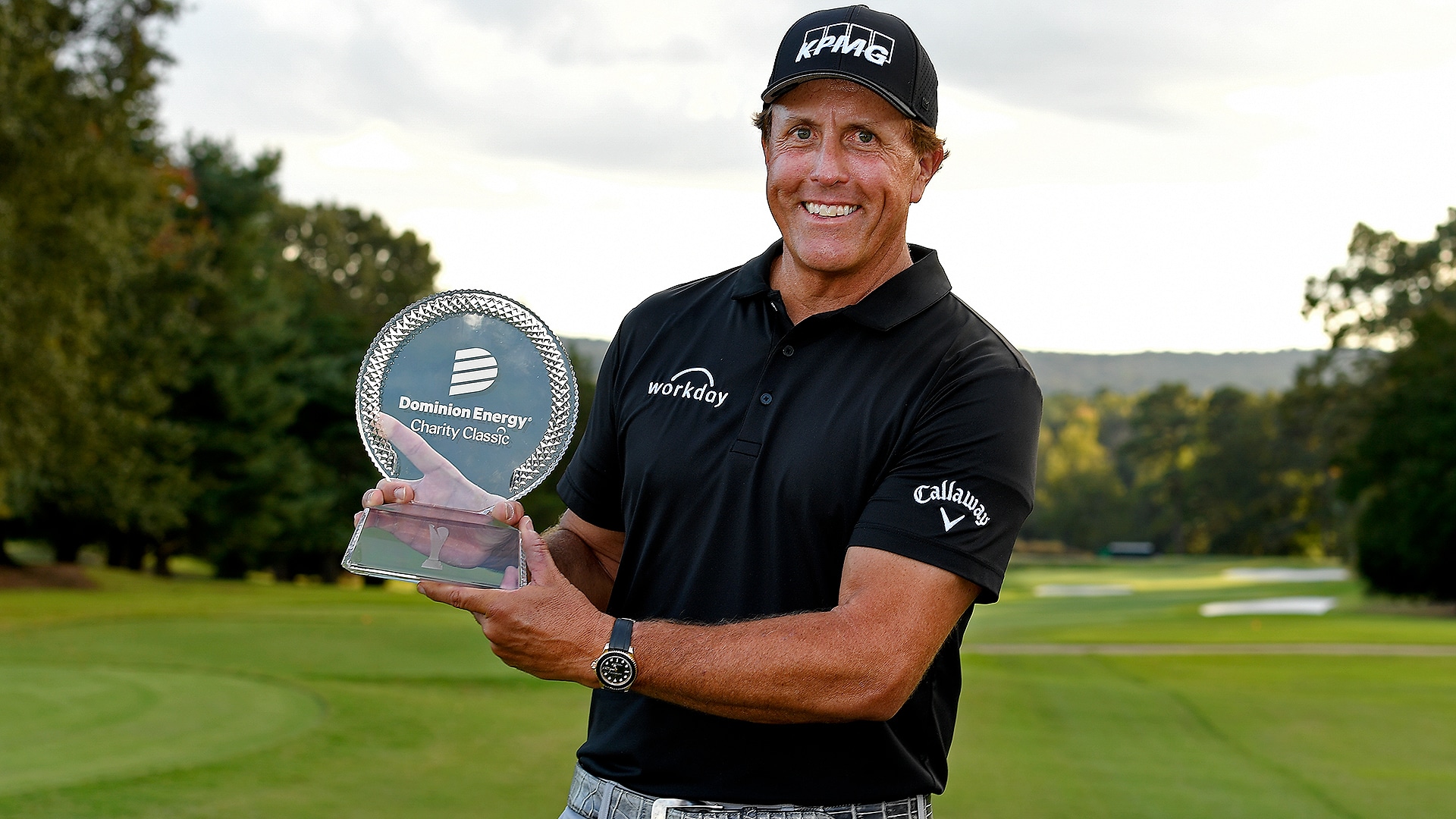 RICHMOND, Va. – Phil Mickelson likes to play aggressively and found the PGA Tour Champions' stop at The Country Club of Virginia the perfect place to begin his preparations for the Masters.

Bombing drives like he will have to do against the younger set on the PGA Tour, Mickelson shot a 7-under 65 and became the third player — and second this year — to win his first two starts on the tour for players 50 and older. He slammed the door on Mike Weir with a back-nine surge Sunday in the Dominion Energy Charity Classic.

“It’s fun for me to come out here and play well and this is a good start for me as I try to build a little bit of momentum heading to Augusta in about a month,” Mickelson said.

He finished at 17-under 199, one off the event record set by Miguel Angel Jimenez last year.

“I put a new driver into play this week, trying to get a little more pop, a little more carry. It was a little wayward at times, but it was also effective in allowing me to play this course the way I wanted to, which was aggressively,” Mickelson said.

Mickelson beat fellow left-hander and second-round leader Weir by three strokes. The fellow rookie closed with a 71 and said he would have contended had he putted better.

“I haven’t been in this position in a while, but I felt very confident," the Canadian said. "I hit one poor tee shot on No. 7. Outside of that, I played really well and just didn’t get anything really out of it.”

The winner in late August at Ozarks National in Missouri in his first start on the tour, Mickelson joined Bruce Fleischer and Jim Furyk as the only players to win in their first two senior events. Fleischer accomplished the feat in 1999 and Furyk did it this year with victories at The Ally Challenge and Pure Insurance Championship.

Mickelson said earlier in the week he came to Virginia to work on accurate driving and competitive fitness, and was hoping to still be in contention for the closing holes.

"I felt like the last six holes I had an opportunity with the two short par 4s and two par 5s to make something happen,” he said, noting the advantage of his length. “... I was able to have two putt birdies on three of those holes and that was very helpful.”

He got the lead when Weir three-putted the par-3 14th green, doubled his edge with a birdie on the next hole, then highlighted his distance advantage over the 2003 Masters champion by driving the green on the 274-yard, par-4 15th. He two-putted from 30 feet, then reached the par-5 16th in two and made birdie, canceling out Weir's birdie.

Mickelson's chance to work on his competitive side came right away. He erased a three-shot deficit with birdies on three of the first six holes while Weir made a string of pars, but it was on the back nine that he was really tested, and delighted with his response.

After going a shot behind on the 12th hole, he pulled even at No. 13 and kept pushing.

Mickelson, who hasn't won on the PGA Tour since early 2019 at Pebble Beach, plans to return to the PGA Tour next week for the Zozo Championship in California. After a week off, he'll play in the Houston Open as his final preparation for the Masters on Nov. 12-15.

Weir three-putted the par-5 18th, but still hung on to beat Paul Goydos (65) by a shot. Bernhard Langer (67) and Brandt Jobe (68) shared fifth, five behind Mickelson.

It was Weir’s third top-10 finish in eight starts on the tour.

“I was low right-hander this week,” Goydos quipped.

Robert Karlsson, another rookie on the tour, closed with a 64 including an albatross 2 on the final hole. The ball bounced twice, then found the bottom of the cup.