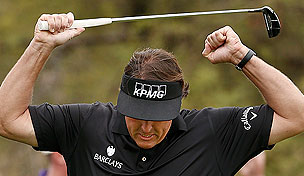 SCOTTSDALE, Ariz. – Phil Mickelson is a top-10 golfer once again.

Ranked 22nd in the Official World Golf Ranking prior to this week, Mickelson’s win will move him up to 10th when the next ranking is announced on Monday. He is only .02 average points behind Bubba Watson in ninth place.

Brandt Snedeker, who finished runner-up for a second straight week, moved up another spot on the OWGR to No. 6. That is the highest ranking of his career.