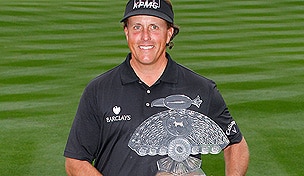 Getty Images
MIYAZAKI, JAPAN - NOVEMBER 22: Brandt Snedeker of the USA makes a tee shot on the 5th hole during the third round of the Dunlop Phoenix Tournament 2008 at Phoenix Country Club on November 22, 2008 in Miyazaki, Japan. (Photo by Koichi Kamoshida/Getty Images)  -

SCOTTSDALE, Ariz. – Because a win can’t just be a win, because it must be put into context and scrutinized and analyzed, it’s not enough to simply state that Phil Mickelson’s torrid play at the Waste Management Phoenix Open gave him a 41st career title and nearly set PGA Tour scoring records. No, we must instantly rate it and rank it and give it an official placement before the ink even dries on the oversized check.

And so we search for superlatives, ways to interpret the triumph. This is a trial-and-error process. Before we can declare what this win was, we must first determine what it wasn’t.

This wasn’t the most important victory of Mickelson’s career. That will forever be the 2004 Masters, when he earned his first major title in dramatic final-hole fashion.

This wasn’t the most convincing victory of Mickelson’s career. That would be the 2006 BellSouth Classic, when he bested the next closest competitor by 13 strokes.

This wasn’t the most unexpected victory of Mickelson’s career. That would be the 1991 Northern Telecom Open, when at age 20 he became the sixth amateur ever to win a PGA Tour event.

So what was this victory, exactly? How should we scrutinize and analyze, rate and rank a wire-to-wire title that was never seriously in doubt?

“I don’t know,” Mickelson said after pondering those questions.

Turns out, there’s only one superlative to perfectly describe it.

This was the most Mickelson victory of Mickelson’s career.

That’s because his career has been a series of ups and downs, unseen twists and turns that fly in the face of consistency. And this victory epitomizes that image.

Exactly two weeks ago, Mickelson had just finished off a share of 51st place at the Humana Challenge when his chat with a few scribes turned to personal politics. The 42-year-old California resident contended that he may need to make “drastic changes” because of the state’s new tax laws, which could include moving his family elsewhere.

Three days later, he was apologizing for foot-in-mouth syndrome, telling the world that going public with his original comments was a “dumb, dumb mistake.” Self-effacing to a fault, it recalled his reaction to the 2006 U.S. Open loss, when he famously maintained, “I’m such an idiot.”

He followed that penance by finishing T-37 at the Farmers Insurance Open. While his scores didn’t reflect it, Mickelson believed he was close to yet again seriously contending for a title.

Even so, turning things around so quickly would have been far-fetched for most other players, but just par for the course for Mickelson. This is a player for whom the phrase “expect the unexpected” isn’t just a mantra; it’s a marketing campaign. They don’t ask the question, “What will Phil do next?” because he plays steady golf and finishes in seventh place every week.

This week, the game’s most unsinkable player posted scores of 60-65-64-67 to win by four strokes and claim his third career title at this tournament. As if the entire week itself wasn’t enough of a microcosm for his career, the penultimate hole in particular served perfectly in this role.

On the drivable par-4 17th hole Sunday afternoon, Mickelson pushed his tee shot to left, just inches from finding the water hazard. Rather than creating disaster, he chipped to 13 feet and converted the birdie putt – a magic act that fully suited his image.

There were others, too, throughout the week. The final putt on Thursday afternoon for the sixth 59 in PGA Tour history that looked good the entire way, but horseshoed out. The near-ace at the famous 16th hole on Saturday that drew raucous applause. The seventh-hole birdie putt on Sunday that went through the fringe with 20 feet of break and somehow found its intended target.

Say this for the man: He’s never boring.

On this occasion, in this win, he understands how his usual buoyancy benefited the end result.

“It's an important one for me, because it's been awhile since I won, been awhile since I've been in contention,” said Mickelson, who won for the first time in 51 weeks. “I was certainly nervous heading into today's final round. I think the thing I'm most excited about was the way I was able to regain control of my thoughts after a few shots early on that I didn't care for and come back and hit a number of good shots on the back nine to do what I needed to do to win.”

It would be too flippant to analogize this win in Phoenix to a phoenix rising from the ashes, especially because we’ve learned to expect the unexpected from him. The sentiment remains, though. This wasn’t the most important or most convincing or most unexpected victory of his career, but it was the most Mickelson, symbolizing everything we’ve come to know about his resiliency.