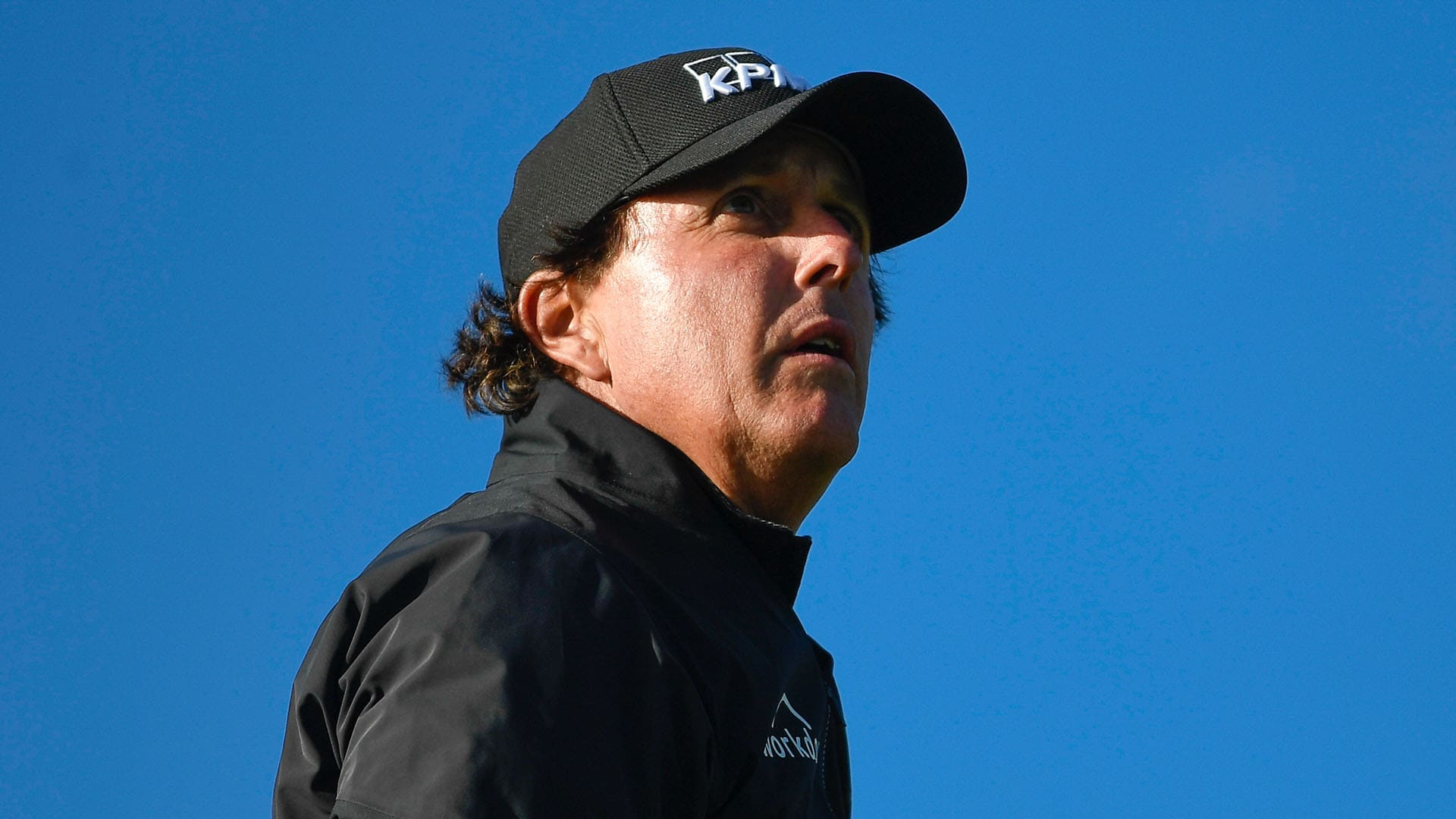 PEBBLE BEACH, Calif. – Phil Mickelson pulled the coin out of his pocket as he walked to the 18th green Monday morning to close out his record-tying fifth AT&T Pebble Beach Pro-Am victory.

It’s a silver dollar minted in 1900, a memento passed down from his grandfather, Al Santos, and Mickelson's ball marker this week on the iconic seaside course.

He showed it to his brother and caddie, Tim.

“He didn’t have to,” Tim said outside of the scoring trailer as his brother went to hoist another trophy, the 44th of Phil’s career. “When I saw it in his hands, I knew what it was.”

The coin is special because of the connection it gives Phil and Tim to Pebble Beach Golf Links, where their grandfather worked as one of the original caddies after the club opened in 1919. His grandfather grew up on the Monterey Peninsula in a family that made its living in the fishing industry. Santos made 25 cents a loop as a caddie back then, pitching in to help his mother and father make ends meet when the fishing wasn’t so good.

Phil plays with a replica of the silver coin in other tournaments, but he brings out the real thing when he plays Pebble Beach.

“There’s an emotional tie to this place,” Phil said.

On a chilly-but-spectacular morning under sapphire skies, the Mickelson brothers appreciated what being there meant, beyond the chance to equal Mark O’Meara’s record for most titles won in this event. Their grandfather shared his love for Pebble Beach in stories he told them before he passed 15 years ago.

The brothers talked about it as they arrived to get ready to play the last two holes of the suspended final round amid the rugged beauty along Stillwater Cove.

“We were talking about it before we even started, how our grandfather caddied here a hundred years ago and having it be the best day of the week,” Tim said. “What I can say is we were definitely thinking about grandpa and how much we miss him.”

Mickelson closed in style, making par at the 17th and birdie at the 18th to sign for a 7-under 65 that helped him beat Casey by three shots.

At 19 under overall, Mickelson delivered a message to all the young stars taking control of today’s game. At 48, he’s got a plan to hold off Father Time. This victory is his second in less than a year. It comes just three weeks after his near victory at the Desert Classic, where he came up one shot short.

There’s something special brewing in Mickelson’s game again. He’s on to something. This run of good play comes with the Masters two months away and the U.S. Open returning to Pebble Beach in four months.

Mickelson was asked what we should make of that.

“I just think that both myself and Tiger are going to have a really, really good year this year,” Mickelson said.

There was a metaphor in Mickelson chasing the setting sun on Sunday, in his desperation to close out the victory before darkness fell.

In his larger chase, the sun’s setting, too.

Mickelson will turn 49 on the Sunday of the final round of this year’s U.S. Open. When he whacked that moving putt out of frustration at Shinnecock Hills last year, it looked like a white flag going up, like a surrender to the notion that he was never going to win the U.S. Open and complete the career Grand Slam.

Who thinks that now?

With all the work he has put in with a nutritionist on his diet, with the bio-mechanical study that has helped him train weak areas in his body and gain new explosiveness in his swing, with the flexibility achieved in new stretching regimens with his trainer, Mickelson may be figuring out how to trick Father Time, if not flat out beat him.

The guy is always touting some new theory, and maybe he’s on to something bigger as he battles the aging process.

Mickelson said Monday that he believes keeping up with the young guys boils down to a pair of key components of the game.

“Historically, guys, when they get in their 40s, two things decline, their putting and their swing speed,” Mickelson said.

Mickelson said he is getting better at both.

“There's no reason why I couldn't play my best,” Mickelson said. “But, again, I'm competing against so many great young players, that any victory and every opportunity to win I cherish.”

Mickelson said his ability to continue to thrive in his late 40s is all about what he’s spending his time on.

“It's a lot more work off the course,” Mickelson said. “It’s more time in the gym. It’s more time eating [the right foods]. It's all these things that go into it. So, it’s very gratifying to see the results and to finish it off the way I did.”

Mickelson said his focus is more on the Masters now than a return to Pebble Beach in June, but he would relish taking his grandfather’s silver dollar out to mark the winning putt again here in four months.

“I have such great memories here," Mickelson said. "I would love to add to it.”