Mickelson's 60 a great round, but comes up short 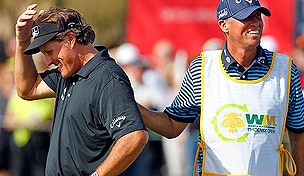 SCOTTSDALE, Ariz. – Unless you have three Masters titles to your name and $67,681,223 in official career on-course earnings and the adulation of millions of fans and a power game off the tee mixed with a finesse game around the greens and a buttery putting stroke and a great family life and your own charitable foundation, you probably don’t know what it’s like to be Phil Mickelson.

So here’s a clue.

Afterward, he was asked about it. Myriad questions about what went right and why he scored so low and how excited he was about the day. Mickelson looked each questioner in the eye, shook his head in that patented “aw, shucks” way of his and this is what he said:

“Man, you just don't get those opportunities very often…

… it kind of mortifies me…

… that one was heartbreaking…”

Most players would be performing cartwheels down the fairways after a 60. They’d be ecstatic about the accomplishment, proud of the way they started low and went even lower.

Not that Mickelson wasn’t, but his tone said otherwise. To him, this was an opportunity wasted. There have been five scores of 59 posted in PGA Tour history and the excitable lefty wanted to join that list. No, he wanted to better it. He wanted to become the first player ever to post lower than 59. The first player to make the impossible possible.

This was different than the last time he shot 60 in an official tournament, right here at TPC-Scottsdale. Eight years ago, in the second round of this event, Mickelson birdied the final five holes to post that score. It was like a race car driver stepping on the gas pedal over the last few laps to sneak across the finish line in impressive time.

Sure, there were missed chances and botched putts, but on that day 60 felt like an emphatic success.

He needed two birdies in his last five holes. Then he needed one birdie in his last two holes. Just one little birdie for a man who averages 4.75 each round so far this season – or one every 3.78 holes.

On his second-to-last hole, Mickelson had a mere 17 feet for that birdie. His read was true, but he left it short, recalling an old axiom in the game: Never leave your putt for a potential 59 short.

And so it came down to the final hole. After another drilled drive and green in regulation, 25 feet separated him from history. Mickelson stroked the putt, watched it, walked after it, pointed at it, saw it hit the lip of the cup and somehow stay out of the hole, horseshoeing back toward him mockingly.

He held his head and muttered to himself. Just a few feet away, his longtime caddie, Jim “Bones” Mackay, fell to his knees. They hadn’t mentioned the score between them – Mackay compared it to “a pitcher in the middle of throwing a no-hitter” – but each man knew what was at stake.

In all realms of the game, Mickelson succeeded on Thursday. He played better than everyone else in the field; scored better than almost everyone else to ever play a PGA Tour round. And yet, he couldn’t climb that wall. He couldn’t break the barrier from great to historic, leaving him shaking his head and muttering and using words like “disappointed” and “mortified.”