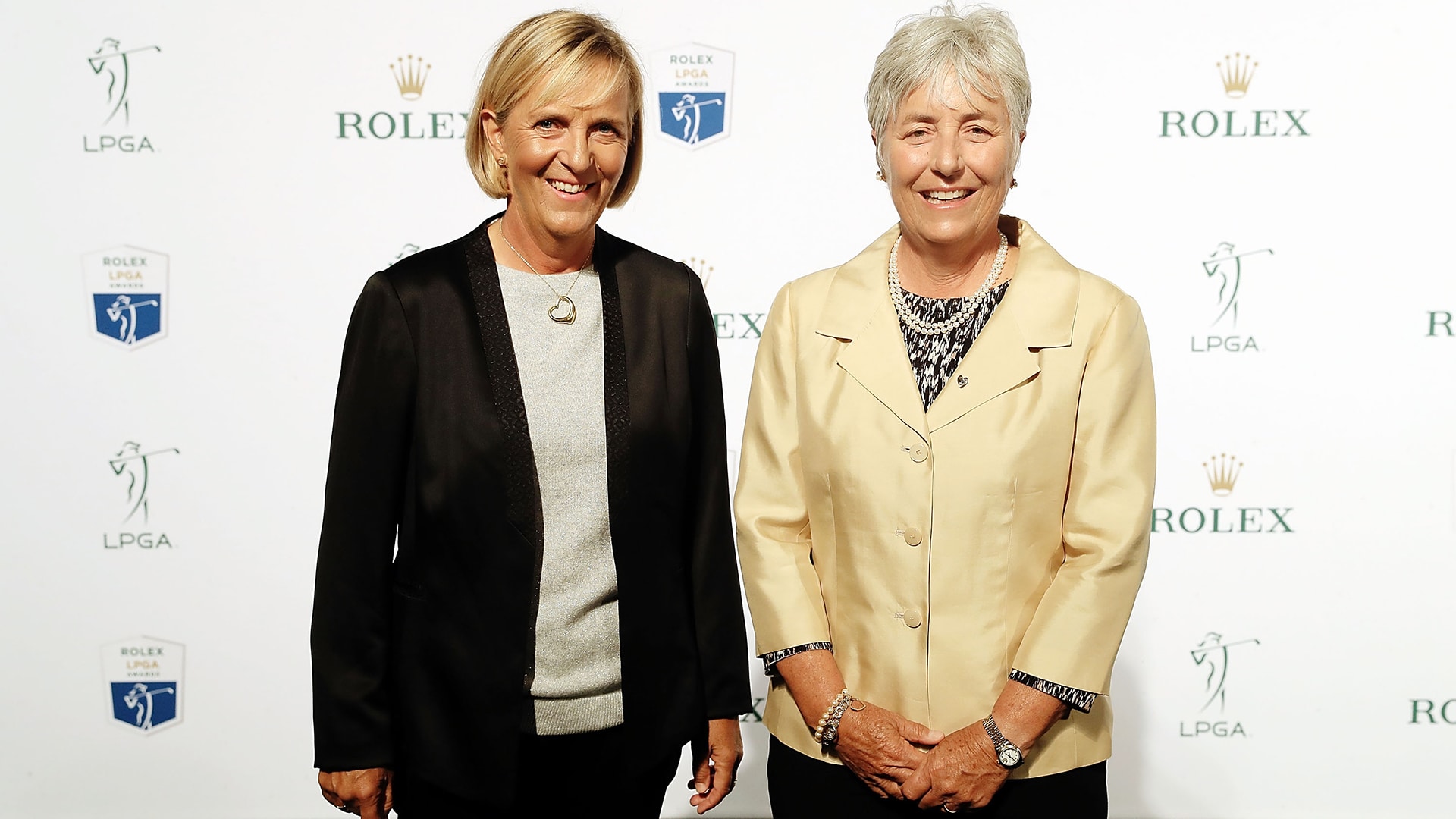 Every time Pia Nilsson and Lynn Marriott walk the practice range at a tour event, it’s like they’re hiking around the top of Mount Everest.

Yes, that’s hyperbolic in the imagery but accurate in the measure of where Nilsson and Marriott rank among female pioneers in their sport, in how fraught with obstacles their journeys have been in establishing themselves in a man’s world.

Six hundred and thirty women have climbed to the top of Mount Everest.

Nilsson and Marriott are pretty much alone as female coaches working with PGA Tour and LPGA pros on the game’s biggest stages.

Yes, Susie Meyers reached that level, coaching Michael Thompson and Derek Ernst to PGA Tour victories. She broke a glass ceiling. So did Pam Barnett, taking Ted Purdy to the Masters. Gale Peterson and Nancy Quarcelino are among women who coach tour pros from their home bases, but no female coaches have established themselves as fixtures at tour events in the way that Nilsson and Marriott have. They’ve hoisted themselves to another level, working alongside Butch Harmon, David Leadbetter, Sean Foley, Cameron McCormick and Gary Gilchrist.

Nilsson and Marriott have been a team at Vision54, the school they founded in Scottsdale Ariz., for more than two decades.

They’re the only women among the top 25 in Golf Digest’s latest rankings of the game’s best teachers.

Nilsson, 62, and Marriott, 61, call themselves performance coaches. They’re known for their work in the mental game, for coaching minds and hearts, but they are also swing coaches, something that sets them apart from the sports psychologists who work the tour. While they often work in tandem with a player’s swing coach, they know the technical components of swing instruction. They do that work with some players, too.

They’ve worked with Annika Sorenstam, Ai Miyazato and Ariya Jutanugarn and dozens of other LPGA pros. They work with Kevin Streelman and Russell Knox on the PGA Tour.

They’ve earned the respect of the top male coaches who still dominate the practice range.

“They come from a playing, teaching and coaching background, and they’ve made a valuable contribution to the game,” Leadbetter said. “In a so-called man’s world, they’ve played a big role.”

Foley admires the unique signature they bring to coaching.

“The wholistic view they have to performance is very impressive,” Foley said. “It’s almost something that was going to come from two women, not two men. They’re looking at the world differently.”

There’s wisdom beyond their golf skill that Foley likes about their approach, a life experience he sees helping Nilsson and Marriott connect with players.

“It hasn’t been an easy road for them,” Foley said. “They understand the grit, resilience and endurance you need. To help someone, you have to have a certain amount of empathy. That means you have to have been through it yourself.

“They are the voice of reason when players are losing their minds.” 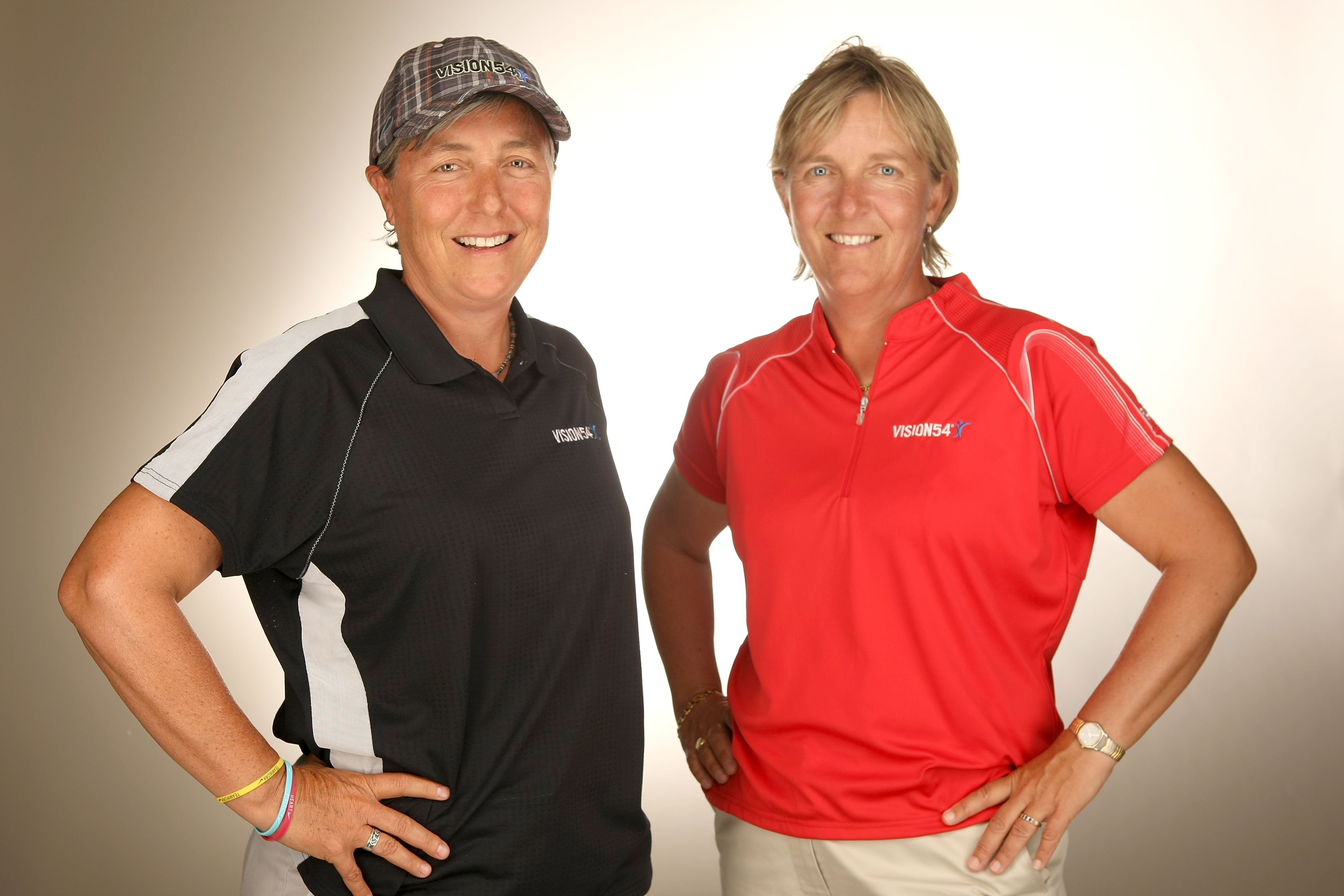 There were more than a few roadblocks to be navigated in proving themselves.

She was the first woman to lead the merged programs.

Nilsson was a Swedish junior standout who played at Arizona State before playing the LPGA for five years, but there were men lined up to lead the Swedish teams who didn’t like a woman getting the job.

There was a backlash.

“It was controversial,” Nilsson said. “There were questions about whether a woman could lead the men.”

Nilsson was ready to answer that question with a unifying effort.

“I grew up with older brothers and was brought up with the attitude that I could do anything my brothers could do,” Nilsson said. “It helped me a lot, having the courage to do it, and to deal with the criticism.”

When Nilsson was first offered the head coach’s job for the women’s national team, she asked a Swedish PGA executive if she should seek the same salary as the men’s head coach.

“He said I should probably ask for something lower,” Nilsson said. “I didn’t take his advice.”

Nilsson knew she wasn’t just asking for herself. There was a principle. She was asking for every woman doing the same job a man does.

She got what she asked for, the same pay as the men’s head coach.

Marriott faced her own challenges breaking into golf’s male dominion.

Back in ’83, when Nilsson was an LPGA rookie, Marriott was trying to launch her career as a teaching pro. She took her first attempt at becoming a PGA certified professional that year.

“I knew straight away I needed to get my PGA credentials before I got my LPGA teaching credentials,” Marriott said. “It was a man’s world, and I knew if I was going to have any chance of pursing what I really wanted to do, I had to have the PGA certification.”

Women weren’t allowed to be PGA of America professionals until 1979, after Barrie Naismith sued the organization, winning the right to membership.

Back when Marriott applied, women were required to take the PGA’s Player Ability Test from the same tees as the men. That was daunting enough, but doubly so, taking the test at PGA National, shortly after the Ryder Cup was played there.

“The rough was still up from the Ryder Cup,” Marriott said. “Playing back with the men on the men’s tees, there were holes where my drives didn’t even reach the fairway.”

“It was ridiculous,” Marriott said. “I made a formal complaint.

“They eventually changed the length for women. It wasn’t because of my letter, but I think it fueled some conversation.”

Marriott knew she was taking a stand for every woman trying to gain PGA certification.

She passed on her third attempt. She was among the first women to pass the PGA test.

Once Marriott began teaching, there were other challenges. A prominent male colleague told her she was making a mistake trying to teach, that there wasn’t a good future in it for a woman, that she should be in the pro shop, trying to work her way up the administrative ladder.

“I didn’t want to be in a pro shop,” Marriott said. “I wanted to teach.

“That really fueled me. I was super motivated. I was like, `I’ll show you.’”

Marriott knew she was in a box early on, hired to teach women. She wanted to teach players, the best players, men and women.

So Marriott signed up for the best seminars, traveled to be among the best teachers.

Usually, she was the only woman there, which made for awkward moments, with so many of the men already knowing each other.

“At coffee breaks, there was nobody to talk,” Marriott said.

But then Nilsson, after turning her interests to coaching, began showing up at the same seminars.

“We kept running into each other,” Nilsson said.

The friendship would lead to a business together, to their school in Scottsdale, where they further developed the Vision54 idea Nilsson originally pursued as the Swedish national coach. The idea was based on the premise that if elite pros had birdied every hole on their home course over time, why couldn’t they birdie them all in a single round? The vision was more aspirational than literal. Nilsson hoped the idea would help break a limiting world view she believed plagued Swedish golf, a belief that their country was too small and the summers too short to produce more than the occasional world class player.

The idea caught fire in Sweden, with Sorenstam becoming the face of it with her success on world stages.

As a team, Nilsson and Marriott met skepticism when they set out to expand their ideas at their new school in 2000.

“We had people telling us it wasn’t going to work,” Marriott said. “We were women, teaching something that wasn’t traditional, nobody was going to come.

The Vision54 idea continued to evolve, with the team’s interest in human potential studies growing, too.

That led to a pitch to write their first book together, “Every Shot Must Have a Purpose.”

Brimming with excitement, Nilsson and Marriott took off to New York, to meet with a literary agent in 2003. As coaches, they were breaking out of that box the game wanted to keep women. Their ideas were gaining wider regard across the game’s ranks.

But they left the agent’s office feeling as if they had been punched in the gut.

“He just looked at the proposal and said, `I don’t think this is going to work,’” Marriott said. “You should write this for women, as a women’s golf book.’ We were so deflated.”

They walked out the front door knowing they would be back.

“We knew our message wasn’t just for women,” Nilsson said.

A few weeks later, the agent changed his mind.

The book was under contract, with long-time golf writer Ron Sirak signed on to help write it.

Sirak’s interest in Nilsson and Marriott was piqued watching Sorenstam play against PGA Tour pros at the Colonial in 2003.

“When Annika Sorenstam handled the pressure of playing a PGA Tour event so magnificently, it made a lot of other coaches take notice,” Sirak said. “Still, Pia and Lynn don’t get the recognition I believe they deserve because most of their success has been with women.

“Kevin Streelman and Russell Knox have been their most successful male players. Someday, a top-tier male player will look at what Annika did, 72 wins and 10 majors, and ask how she got there and then realize the role of Pia and Lynn.”

They will know where to find Nilsson and Marriott.

On the mountaintop with all the other top coaches.