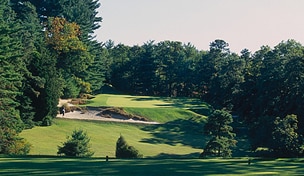 Pine Valley is back to No. 1 in Golf Digest magazine's biennial list of the top 100 courses in the world. The private club in southern New Jersey, designed by George Crump and Harry Colt, had been replaced in the previous list by Augusta National, which this year is No. 2.

The top five remained the same, though there was some reshuffling. Cypress Point went from No. 5 to No. 3, Shinnecock Hills went from No. 3 to No. 4, and Oakmont dropped from No. 4 to No. 5.

Rounding out the top 10 were Merion (East), site of this year's U.S. Open; Pebble Beach, Winged Foot (West), Sand Hills and Fishers Island Club, which was the only newcomer to the top 10 for the 2013 list. Fishers Island replaces National Golf Links, which slipped one spot to No. 11.

Oak Hill, which will host the PGA Championship this year, moved up four spots to No. 17.