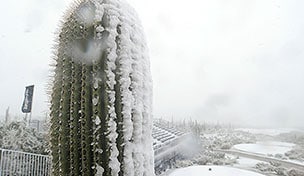 MARANA, Ariz. – After a freak storm dropped about an inch and a half of snow at Dove Mountain, the PGA Tour will look to simply get back on track by completing the opening round of the WGC-Accenture Match Play Championship on Thursday.

Play is expected to resume at 8:30 a.m. local time, with the Round of 32 to begin sometime around midday.

Tour meteorologist Stewart Williams predicted that there still could be some lingering snow on the course on Thursday morning. The low temperature will be around 33 degrees, meaning the snow has little chance of melting completely before play was originally scheduled to begin at 7:25 a.m. local time.The forecast calls for highs in the mid-50s.

“The worst is over,” Williams said, “so if we can get the sun to pop out this afternoon, I think that’ll melt a lot of this away and help us out.”

None of the 32 first-round matches was completed, and 18 players, including the four top seeds, have yet to tee off.

On Wednesday, temperatures started out in the upper 40s before bottoming out at 33 degrees, when a sideways rain turned to heavy snow.

Play was suspended at 11:07 a.m. local time and officially called for the day two hours later.

“We were just spinning our wheels,” said Mark Russell, the PGA Tour's vice president of rules and competition. “So we just decided to pull the plug on it.”

The good news: There should be little trouble completing the tournament by Sunday.

“We’ve got a lot of possibilities with this small of a field, and it cuts itself in half every time we have a series of matches,” Russell said. “We have a lot more leeway in this situation than we would have in 144-man or 156-man stroke-play competition.”