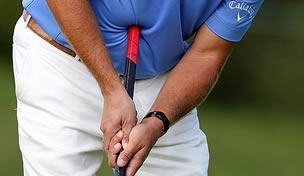 I spent much of Tuesday asking many of them about anchored putting, which just happens to be the most polarizing issue in the game today.

You might think my questions would be countered with passionate responses. Raised voices. Adamant opinions. Finger pointing. Foot stomping.

Instead, they were met with resounding tolerance. These players could go either way. Give or take. They’ve approached the matter without any preconceived notions.

Collectively, they are golf’s version of the independent party, choosing not to align themselves with any specific side based on previous personal preference.

That’s not a criticism. In fact, it’s quite the opposite. Players should be commended for individually examining the issue and picking a side – or better yet, picking both.

“I can see both sides to it,” Jason Dufner explained. “It doesn’t affect me because I don’t use one. Obviously I play against guys that use them, but I don’t see an overall trend where guys who are putting with them are just making every putt. There’s not a lot of evidence that supports it’s an unfair advantage.”

“I was originally indifferent,” Mark Wilson admitted. “I was like, I don’t care because I don’t putt that way. But the more I thought about it, the more it seemed like it will drive people away from the game and we don’t want that to happen.”

The game is in a sticky situation these days. On Nov. 28, the U.S. Golf Association and Royal & Ancient Golf Club jointly announced that they would propose a ban on anchored putting. Officials for the former organization sought a recommendation from the PGA Tour during a 90-day comment period. On Sunday, with that period soon coming to an end, commissioner Tim Finchem echoed the voices of the policy board and player advisory committee by announcing an opposition to the ban.

That announcement was due in no small part to this open-mindedness of the players. Many were swayed by an impassioned Tim Clark at last month’s player meeting. Others came to the conclusion through conclusive data or simply by speaking with peers.

“I think initially when they announced it, a lot of guys were like, ‘Yeah, I’m all for that; I use a short putter and they shouldn’t be allowed to use those,” Geoff Ogilvy said. “But I think the longer they’ve had discussions with friends and heard all the arguments from guys like Tim [Clark] and Carl [Pettersson] and Kevin Stadler and Webb [Simpson] and all that, they’ve perhaps gained a little sympathy for the other side of the argument.”

After all, if neither side ducks in this global game of chicken, there is a very real possibility that anchored putting could be allowed every week on the PGA Tour, but disallowed in at least two of the four major championships, if not more.

“Not that I totally agree with everything the USGA does, but I think they usually do a pretty good job,” Barnes said. “My theory is that if they do ban it, then I think we should follow suit. But if we don’t, then I don’t agree that the one week we do play the U.S. Open or the British Open that it’s banned. I think it will take away from the game, because I think some of those players who anchor their putter won’t play in those tournaments – and that’s the wrong thing for the game.”

“I don’t think there’s ever been a precedent where the Tour says, ‘We don’t support this,’” Dufner added. “But in my opinion, I don’t think we’re going to have an anchoring ban. I think it’s going to go away. In this case, the PGA Tour might be a little bit stronger than what the USGA and R&A are trying to do.”

Apparently you can get a pretty good view of things when you’re sitting high on the fence.

Maybe it’s a trickle-down effect. The game’s No. 1-ranked player, Rory McIlroy, spoke about the issue on Tuesday with equal parts candor and impartiality.

“I'm all for people enjoying the game and trying to make the game as easy as possible and bringing people to the game,” he said. “If that means that they should allow belly putters or anchored putters to make it easier for the general public, then you know, that's a good thing. But then they talk about bifurcation and whether you should have one set of rules for us and one set of rules for the amateurs; it's just a bit of a mess. It's just opened a can of worms.”

Worms can be a useful tool. They help catch fish; they aid gardens in growing. In this case, the can of worms has brought open-mindedness to the game’s top golfers that isn’t always so evident.

Most polarizing issues tend to tear opposite sides apart. This one seems to be bringing them together in a way, at least in the sense that everyone is collectively thinking about what is best for the game.