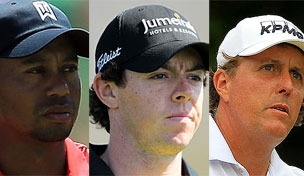 KAPALUA, Hawaii – There’s trouble in paradise. And it isn’t the blew-out-my-flip-flop, stepped-on-a-pop-top kind of trouble.

This week marks the beginning of the PGA Tour season, with the Hyundai Tournament of Champions taking place here on the island of Maui, against the backdrop of breaching whales, resplendent rainbows and abundant palm trees. If that doesn’t sound appealing enough, players are shuttled back and forth from the nearby Ritz-Carlton, which isn’t exactly a Motel 6.

“I was walking around near the hotel yesterday and I looked around and told my wife, ‘I want to be here every year,’ said Webb Simpson, who finished in a share of third place last year. “To be able to start your year in Hawaii, it doesn’t get any better.”

Even aesthetically challenged competitors can find beauty in the tournament’s format. After many of them had shut it down during the holidays, they can now enjoy the relaxed nature of this week’s four-round, no-cut, guaranteed money setup. Consider it the Tour’s version of a holiday bonus.

So where’s the trouble? Check the numbers.

Of the 37 players who qualified for this event by winning in 2012, only 30 are here, leaving the rest to cruise on back home.

That number may provide an above average percentage for greens in regulation, but it denotes a problem for what should – or at least could – be one of the crown jewels of the annual schedule. In effect, those here are being overshadowed by those who chose to stay away.

If you’re scoring at home, that’s the top four players in the world ranking and three others who are 24th or better. They have accounted for 156 career PGA Tour victories and two dozen major championship titles.

In other words, they’re really good.

And none of them are here.

It’s easy to place blame on the players themselves for being too greedy/lazy/apathetic/inflexible. Choose your favorite adjective. But that is too narrow of a view. Many of those seven were competing into December and five retain membership on other tours, which requires widespread travel throughout the year.

The fact is, there are many other tournaments throughout the season for which all seven of those players will technically be eligible – including next week’s Sony Open – but won’t play due to other commitments or family priorities or simply needing a week of rest.

It’s also not as if this is a new issue, either. This tournament has been losing superstars on an annual basis for the past decade, yet has continued in its current form. All of which could translate to the Tour being labeled more inflexible than any of the players.

If anything, it’s a shared blame here, but there is no apparent solution.

Quite frankly, none of those factors would ensure the A-listers return to this event. It says less about the TOC, though, than it does the rest of the schedule. When the likes of Woods and Mickelson first played this tournament, there were no World Golf Championship events, no FedEx Cup playoffs and less of an importance on other late-season global events.

“It is far to come,” Simpson explained, “but so is Abu Dhabi, Qatar – those places are pretty far, too. So I don’t know. I think the way the game is changing, it’s becoming more global. Guys are playing around the world more than they used to.”

As if to further complicate matters, this tournament will remain in its current slot going forward, despite the impending wraparound schedule. What it means is that PGA Tour winners during each calendar year will earn invitations to an exclusive event that will now fall as the seventh tourney of the season, but first of the actual year.

Still, it doesn’t solve any of the issues about getting those Magnificent Seven to the Aloha State.

“Our season is so long now. You basically play all year, right to the end of the year and I think guys need some time away,” said defending champion Steve Stricker. “It’s just a tough spot for some guys. Others, we love being here. I hear the field is better this year, so I think it’s going in the right direction.”

There’s still trouble in paradise, with so many elite players skipping the festivities. The other 30 who are here will just have to make do with four rounds earning guaranteed money adjacent to the mighty Pacific.