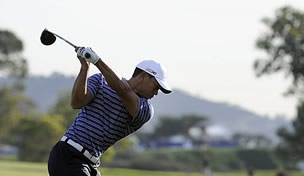 This week there are two events for fantasy players to consider. Our rankings for the European Tour event in Qatar can be seen here, while our players to watch in San Diego are listed below. The PGA Tour remains this week in California, as a star-studded field takes on the North and South courses at Torrey Pines for the Farmers Insurance Open.

Brandt Snedeker returns to defend the title he won in dramatic fashion last year over Kyle Stanley. Here are 10 names to keep an eye on this week along the California coast:

1. Tiger Woods: Despite last week's missed cut in Abu Dhabi, any Torrey Pines list starts with the six-time champion of this event. A T-44 finish in 2011, his only appearance here since 2008, was the first time he was outside the top 10 at Torrey Pines.

2. Charles Howell III: No one's playing better right now than Howell, who after a pair of top-3 finishes heads to an event where he has twice been a runner-up, to go along with two other top-10 showings. The winless drought that dates back to 2007 has to end at some point...right?

3. Brandt Snedeker: The defending champion this week, Snedeker has shown no signs of rust through two starts in 2013. Including last year's triumph, he has four top-10 finishes at Torrey Pines in six career starts.

4. Bubba Watson: A winner here in 2011, Watson is making his first start since a T-4 finish in Kapalua. He followed up his win with a T-13 result here last year, and has broken par each of his last eight rounds at Torrey Pines.

5. Rickie Fowler: Fowler has been under par in 10 of 12 career rounds in San Diego, finishing inside the top 20 in each of three appearances. He's also coming off a T-6 performance in Maui earlier this month.

6. Bill Haas: Haas tied for fourth last year after opening with a 63, and has been inside the top 11 in three of his last four appearances. Friendly confines should help him get the season on track after two mediocre performances to start the year.

7. Phil Mickelson: Should he get his tax woes in order prior to the opening round, the three-time champ will likely contend. Mickelson has five other top-5 finishes to his credit here, including a runner-up showing two years ago.

8. Hunter Mahan: Traditionally one of the game's better ball-strikers, Mahan has had success in La Jolla, tying for sixth each of the last two years. No better place for him to try and rekindle the form displayed in the early part of 2012.

9. D.A. Points: Perhaps under the radar, Points has cracked the top 10 at Torrey Pines each of the last three years, highlighted by a fifth-place result in 2011.

10. Scott Piercy: Coming off a pair of top-15 finishes in Hawaii, the bomber heads to an event where he has been inside the top 20 in each of his last two appearances. His strong play should continue here as he remains poised for a breakout season in 2013.