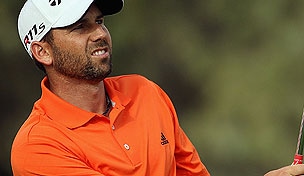 For the third week in a row, we have two events on the fantasy golf slate. Our power rankings for the Waste Management Phoenix Open can be seen here, while the European Tour also claims part of the spotlight with the Omega Dubai Desert Classic. Following a dramatic finish last week in Qatar, many of the game's elite remain in the Middle East to test their game again this week.

Rafael Cabrera-Bello returns to defend the title he won last year. Here are 10 names to keep an eye on this week in Dubai:

1. Sergio Garcia: After coming up just short last week in Qatar, the Spaniard will be eager to build on the momentum at an event where he has been inside the top 20 in each of his last three appearances.

2. Lee Westwood: Making his first start of 2013, the Englishman heads to an event where he has been runner-up three times - including twice in the last three years.

4. Thorbjorn Olesen: The young Dane has continued to build on last year's momentum, following up his runner-up in Abu Dhabi with a T-22 finish in Qatar. Remains one of the names to watch for a potential breakthrough season in 2013.

5. Anders Hansen: Already has a top-10 finish under his belt in 2013, having tied for ninth two weeks ago in Abu Dhabi, and has twice been inside the top 5 in Dubai - including a runner-up finish in 2011.

6. Rafael Cabrera-Bello: The defending champ returns on the heels of a Sunday 64 in Qatar, which vaulted him inside the top 25 for the third time in three starts this year.

7. Chris Wood: The Englishman finally got the monkey off his back last week, capturing his first career European Tour win with an eagle on the 72nd hole last week in Qatar. Now he heads back to Dubai, where he's been inside the top 20 each of the last three years, including a tie for 10th in 2011.

8. Matteo Manassero: Having begun his 2013 season with three straight top-25 finishes, the upstart Italian may be in position to succeed against a somewhat weaker field despite a relative lack of prior success in this event (T-31 best result in three starts).

9. Jamie Donaldson: After his comeback victory two weeks in Abu Dhabi, the Welshman now heads to an event where he was T-16 a year ago and has been inside the top 15 on two prior occasions as well.

10. Stephen Gallacher: Despite struggling so far this season, the Scot should benefit from returning to some friendly confines in Dubai. Gallacher has been inside the top 10 here each of the last two years, including a runner-up showing last year, and has missed the cut only twice in 12 appearances.