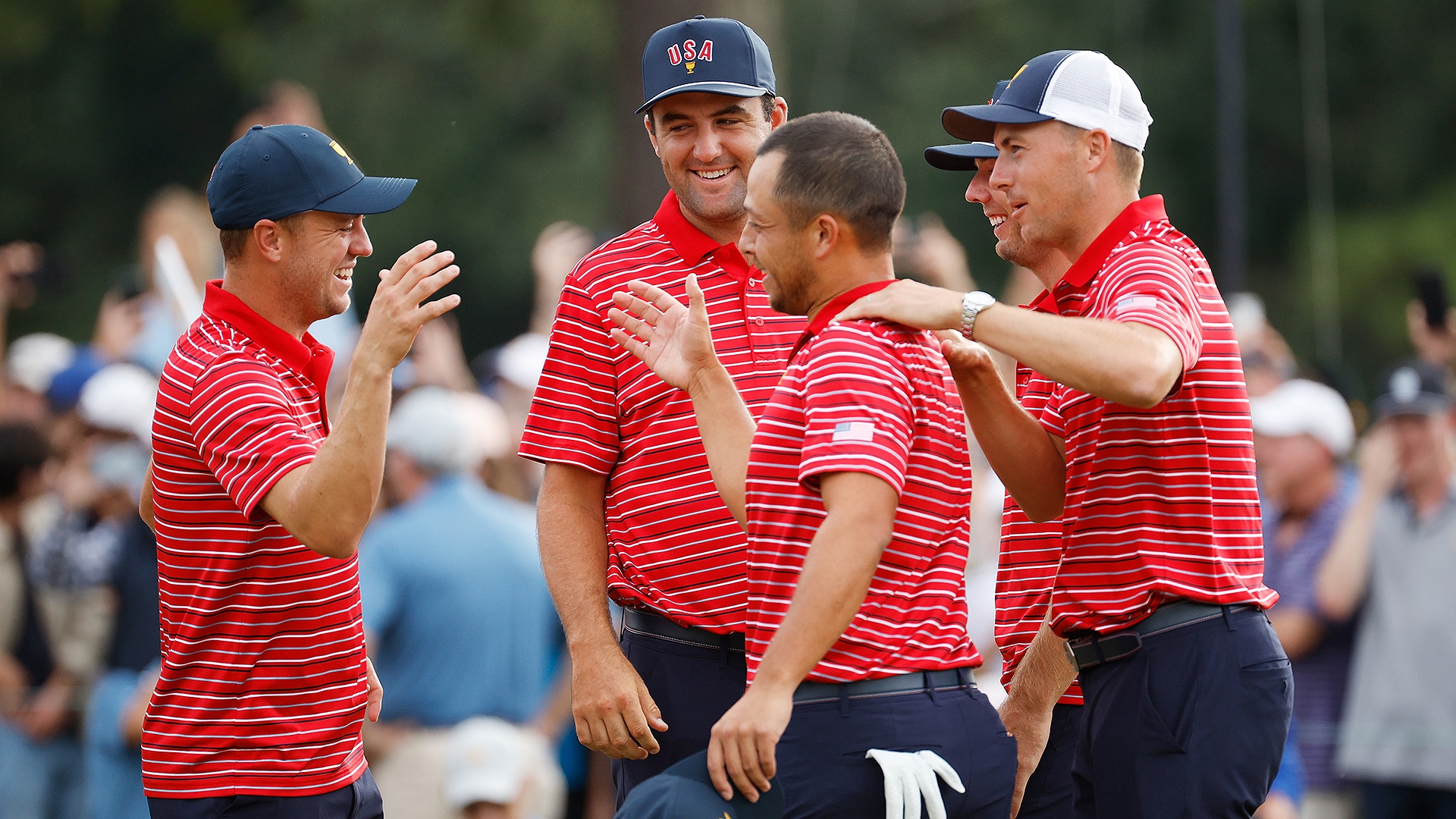 Trevor Immelman's International team began the week at Quail Hollow Club outmanned and as massive underdogs before digging themselves a big hole. But for a moment on Sunday, it looked as if the visitors would dig themselves out of it.

That was until the Americans shut the door, winning the Presidents Cup for the 12th time in 14 events.

After taking Saturday afternoon's fourball session, 3-1, the Internationals entered Sunday trailing by four points and needing to win at least 8 1/2 of a possible 12 points in singles to pull off the upset. They gave it their all, too, at one point pushing the projected final score to just 16-14.

But Tony Finau flipped an important match versus Taylor Pendrith and Xander Schauffele hung on after letting Corey Conners tie their match after being 3 down on the back nine. Add in some match-tying going on toward the bottom of the tee sheet and that was enough to kill any momentum the Internationals had.

Here is a match-by-match recap of Sunday's singles matches in Charlotte, North Carolina:

This one was chippy. Thomas led for much of the way, turning in 2 up. But Kim birdied Nos. 10 and 11 from 20 and 11 feet, respectively, to tie the match. A couple holes later, with Thomas back to 1 up, Kim made Thomas putt from inside of 3 feet to tie No. 13, and the decision clearly miffed Thomas, who rolled in the par. Kim won the next hole with par and then shushed the crowd after matching Thomas’ par make at No. 15. Kim and Thomas traded holes at Nos. 16 and 17, the latter won by Thomas after he stuck his approach to 3 feet. It looked as if the two would play to a half-point, but Kim birdied the par-4 18th hole from 10 feet while Thomas missed from 9 feet to drop to 17-5-3 in Cup matches. Kim earned his third point of the week.

Early on, it appeared as if Spieth’s Cup singles struggles would continue as Spieth, 0-6-1 in the format between the Presidents and Ryder cups, fell 2 down after two holes. But Spieth holed 20-plus-foot birdie putts on Nos. 4 and 5 (from the fringe) to tie the match. He added a 27-foot par make at the par-5 seventh to remain even with the rookie Aussie, who bogeyed the ninth after retaking the lead with par at No. 8. That allowed Spieth to take momentum to the back nine, where he birdies Nos. 11-13 to win those holes and take a commanding lead that he wouldn’t surrender. His win capped a 5-0 week as Spieth became just the sixth player in event history to accomplish the feat and the first American since Jim Furyk in 2011. “I was more nervous than I probably should’ve been today,” Spieth said, “but I really wanted to get that monkey off my back.”

Burns capped his debut Cup with an 0-3-2 performance, but he played much better than that record indicates. He was 2 down on the front nine to Matsuyama before birdieing Nos. 10-12 to take his first lead of the match. The birdie on No. 10 came from nearly 50 feet. Burns gave the lead away at the par-4 15th hole as Matsuyama won it with bogey, but the American managed to sneak away with an important half-point after Matsuyama’s birdie chip at the par-4 finishing hole hit the flagstick and stayed out.

Cantlay jumped on the veteran Aussie by making two birdie bombs at Nos. 2 and 3 (from 20 and 27 feet, respectively). Scott bogeyed the par-3 fourth to go 3 down and couldn’t claw back to better than 2 down as he won just two holes all match. Cantlay sealed the win – and a three-point week personally – after Scott lipped out a 12-foot birdie putt at the par-5 16th hole and Cantlay rolled in a short par putt.

Scheffler played the first seven holes like a man on a mission to secure his first full point of the event. He carded two birdies and led 2 up at that point. But Munoz won Nos. 8-10 to flip the match. Both played traded 60-foot eagle bombs at No. 11, and Munoz kept Scheffler at arm’s length, birdieing three of his next six holes while winning No. 15 and 17 to send the world No. 1 home at 0-3-1.

Each player led 2 up at one point in a back-and-forth fight. Finau won the first two holes before Pendrith got them right back and then some, winning four of the next five holes – three with birdies – to take a 2-up lead of his own. But Finau didn’t give up. He birdies Nos. 11-13 to retake the lead and made some crucial putts – 13-foot and 15-foot birdie makes at Nos. 16-17, respectively – to put Pendrith away.

Schauffele did everything he could to give a point to the struggling Conners, but the Canadian ultimately couldn’t take advantage. He went 0-3 in team play and then carded five bogeys and double against Schauffele. The American led 3 up after winning No. 10 with par, but then lost Nos. 12-14 by playing that stretch in 2 over. He appeared to be on his way to losing No. 15, too, after driving his ball into the water. But he hit an incredible third shot from 220 yards out and an awkward lie to 11 feet and made par to win the hole. Conners squandered a big chance at the par-4 17th hole, missing a 5-foot par putt that would’ve won the hole. By tying the hole, Schauffele guaranteed himself at least a half-point, which would get the Americans to 15 points – enough to retain the Cup. Schauffele tied the last to win 1 up and get the clinching full point.

Im won each of the first three holes with par and never trailed in this one. However, by the time Im birdied each of the last two holes to edge Young, Schauffele had already clinched the Cup.

Both players played just two previous sessions and went 1-1, but Lee had Horschel’s number here. Horschel carded bogeys on each of his first two holes to fall 2 down, finished with four bogeys to just two birdies and ended the match with a concession while facing a 40-footer for par. Lee had just three birdies.

Mr. Twitter proved too tough for Thomas the Tank Engine. After going 3-0 in team play, Homa completed a 4-0 week by rallying from a 3-down deficit after 11 holes. He birdied four of his next five holes, grabbing a 1-up lead after No. 15. Kim had a 5-footer for birdie at the last to tie the match, but he couldn’t orchestrate any more heroics after a 2-0 Saturday. Kim finished his debut Cup 2-3.

Though Morikawa won handily, Pereira didn’t play poorly. The two combined to go bogey-free on the front nine, but Morikawa led 3 up after nine holes thanks to three birdies and an eagle from 14 feet at the par-5 seventh. Morikawa added three birdies on the back, including a 25-foot make at the par-5 16th to tie the hole and win the match.

As the anchor match in a Cup that was decided by the seventh match out, the broadcast didn’t show much of this matchup between two top-10 putters in the world. Bez didn’t play at all on Saturday, but he edged Kisner, who ended up with just a half-point in three sessions played.