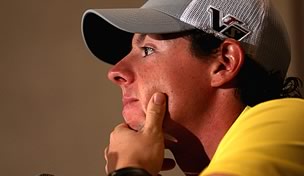 Yes, it was. Self-inflicted and sensational, Rory McIlroy’s miscue last Friday was off the tracks, although the Ulsterman was referring to the UEFA Champions League tilt on Tuesday involving his beloved Manchester United. As for his own faux pas at the Honda Classic, he left no doubt.

“I gave myself a red card,” he smiled.

And so it went, a very public mea culpa at the WGC-Cadillac Championship that hit all the right notes.

“I realized pretty quickly it wasn’t the right thing to do,” McIlroy said of his withdrawal eight holes into last Friday’s second round at the Honda Classic. “It was a mistake, everybody makes mistakes.”

Which brings us back to the why, because the what is rather straightforward. He was 7 over par through eight holes at PGA National and wanted to be anywhere that wasn’t PGA National.

He was in a bad place both mentally and dentally, although he conceded on Wednesday that had he taken a few moments to sort things out on Friday, his ailing wisdom tooth was probably not enough to send him packing.

But the walk-off isn’t nearly as concerning as the metaphorical dumbbells that have been dropping onto his square shoulders this year that prompted the early exit.

Yes, McIlroy is the world’s top-ranked player and a two-time major champion, and with that comes a heightened level of scrutiny, but it should be pointed out that Alistair Presnell and Brian Davis also bolted the Honda Classic before the official dismissal.

Presnell withdrew after nine holes on Thursday citing “illness,” while Davis gave no reason, just an empty scorecard where his second-round totals should have been. That those two are ranked Nos. 160th and 318th, respectively, is why they weren’t answering the hard questions on Wednesday.

Tour policy requires a player who withdraws mid-round to give a reason, which is why Davis could simply slip out of town. It’s also what prompted Team Rory to send out a hasty statement on Friday explaining McIlroy’s exit was tooth related, but after 10 minutes on Wednesday it became clear that if emotional pain doesn’t qualify under the letter of the law then that’s the Tour’s problem, not Rory’s.

This isn’t about wisdom teeth, or new golf clubs or even a slightly-off-kilter swing so much as it is the unquantifiable pressure that comes with the number next to his name.

“You want to sort of prove that you are No. 1 and that's not the right way to go about things,” McIlroy explained to the media, and at times, to himself. “You shouldn't have to try and prove that. You should just go out and play your game and if you play well enough, the rankings and the results will speak for themselves.”

In many ways, Friday seemed to have been an epiphany for McIlroy, a dark corner that needed to be turned. It seems before the Ulsterman covered the 15-minute drive to his new South Florida digs he’d already realized his mistake, but from those depths came the release.

Two months of doubt and four-and-a-half competitive rounds that loosely add up to a 16-over-par card for the year came to a head on PGA National’s 18th hole (he’d started his round on No. 10).

“I actually think in the long run, Friday will be a blessing in disguise,” he said. “It was like it just sort of released a valve and all that sort of pressure that I've been putting on myself just went away.”

Deep stuff for a 23-year-old, but then he’s been here before.

Midway through last summer, McIlroy had missed four cuts in five starts and added the Fedex St. Jude Classic to his schedule in search of answers, but it was a heart-to-heart with putting coach Dave Stockton Sr. at the WGC-Bridgestone Invitational that seemed to right the ship.

“I turn on the TV and look at him and see he’s not playing well. I told him I don’t want to know that. I drilled him last week,” Stockton told him at Firestone.

Over the weekend at The Bear’s Club, in South Florida, a similar theme emerged. From Ernie Els, who was paired with McIlroy on Friday at the Honda Classic, to Graeme McDowell, the deliveries varied but the message was unchanged.

“Just go out and have fun,” he said before a packed room in the Doral media center. “It's not life or death out there. It's only a game. I had sort of forgotten that this year.”

He followed a similar epiphany in 2012 by winning four of his last nine starts and collecting his second major by eight strokes at the PGA Championship. Whether he follows with a like revival remains to be seen but this much is certain: on Wednesday he asked the masses, through the media, for forgiveness. But the real issue will be whether he forgives himself for not living up to the world ranking math and his own wildly unrealistic expectations.

The red card has been issued, now play on.