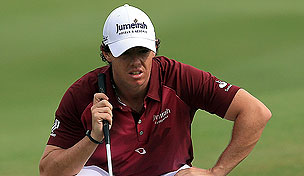 An official announcement is coming Monday, but Rory McIlroy may have already been spotted with his new Nike gear.

A reader at the GolfCentral Daily blog reportedly snapped a few pictures of the world No. 1’s bag as he played a round at the Els Club in Dubai. (Image courtesy GolfCentral Daily. Click here to see more images.)

The blog notes that there are 15 clubs in the bag, including two putters – his usual Scotty Cameron and then a new Nike Method model. It is unclear which flatstick he will use when he opens his season next week in Abu Dhabi.

According to the site, it appears that McIlroy will use the Nike Covert driver, VR II Pro blades, and will have to choose between a Pro Combo cavity back long iron and a 3- and 5-wood. He also has 46-, 50- and 54-degree wedges, with “Rors” stamped on the back.