Report: Woods likely to play in Dubai in '14 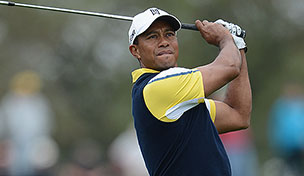 When the Omega Dubai Desert Classic celebrates its 25th anniversary next year, it may have one very prominent past champion in the field.

Barring a scheduling issue, Tiger Woods is likely to play in Dubai next year after he defends his title at the Farmers Insurance Open, according to a report Wednesday by ESPN.com.

Woods has played the Dubai event six times and is a two-time winner (2006, '08). For the past two seasons he has begun his year in Abu Dhabi, tying for third last year and missing the cut this past January.

Tournament dates for the 2014 PGA and European tours have yet to be released, but Woods’ agent Mark Steinberg is reportedly in talks with tournament officials at several overseas events, including Abu Dhabi and Dubai.

“Dubai is the first place he went in the Middle East, he’s won there a couple of times, and we’d do it out of respect because it’s the 25th anniversary,” Steinberg told ESPN.com on Wednesday at Doral. “They are making a very big deal out of that.”