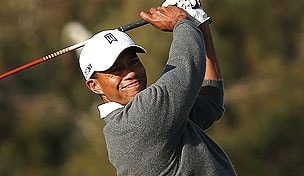 On Sunday, the commander in chief teed it up with Tiger Woods for the first time, according to Golf World senior writer and Golf Channel insider Tim Rosaforte:

The President is arriving at The Floridian range. Awaiting is Tiger Woods and club owner Jim Crane. Historic day in golf. Their first round.

On July 5, 2009, at his own AT&T National, Tiger was asked about playing golf with Obama one day.

“Well, his schedule and my schedule are a little busy,” Woods said at the time. “His is really busy. He’s got a lot on his plate. We’ll get it done sometime down the road. I don’t know when, but we will definitely do it.”

Obama was in Palm City, Fla., this weekend with his wife and daughters away on a Colorado ski trip. According to Reuters, Obama played The Floridian on Saturday alongside Jim Crane, the resort owner and owner of the Houston Astros, as well as democratic fundraiser Tony Chase.

Originally, Woods and Obama were supposed to peg it at Tiger’s home course, The Medalist, located about a half hour south in Hobe Sound, Fla. But weather concerns shifted the match up the road at The Floridian, where they were joined by Crane and U.S. Trade Representative Ron Kirk.

Rosaforte broke the story Thursday that during the buddies’ golf weekend Obama would receive instruction from Butch Harmon, one of Woods’ former coaches, and his son, Claude III. They ended up spending about eight hours together, and Butch Harmon rode in Obama’s cart for a few holes Saturday, a White House aide told Reuters.

Of the Presidential pairing, Rosaforte sent out this tweet midday Sunday:

Not going to turn this into Tiger Tracker, but from pro shop at Floridian we received word TW holed out greenside bunker No. 1 for birdie.

“Just to see the interaction between the two on the range was pretty neat,” Butch Harmon said, according to GolfDigest.com. “The President said to Tiger, ‘The last tournament you played was fun to watch. It’s good to see you play well again.’ You could tell he meant it. It just wasn’t a throw-it-out compliment.”