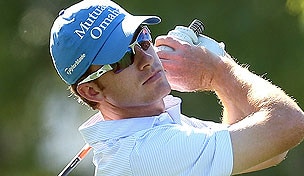 LA QUINTA, Calif. – Whatever happens here Sunday, this much is certain: Roberto Castro has come a long way from those itinerant mini-tour days when he needed only 18 months to put 60,000 miles on his brand-new Honda Accord.

“I listened to a lot of good music driving back then,” he says. “I really knew my stuff. Now I don’t.”

Consider that a tradeoff Castro can probably live with.

Having shared the Humana Challenge lead after each of the first two rounds, he begins the final round in a tie for second, five shots behind leader Scott Stallings. Prior to this week, his best career finish on the PGA Tour was a T-5 at last year’s Puerto Rico Open.

Like Keegan Bradley, Castro has an aunt (albeit decidedly less famous) who played on the LPGA: Jenny Lidback, now 49, who was a 15-year veteran on the tour. Each spring break when Castro was a kid, he and his family flew from their home in Georgia to the Arizona desert, where Roberto could practice with his aunt at Desert Mountain.

“Having someone in the family who has done it,” Castro said, “always made it even more realistic for me.”

Now that Castro, 27, is in his second year on the Tour, he and his aunt don’t talk as often, maybe every few weeks. But the lessons back then are the same ones she instills now: Don’t beat yourself up over a bad round, she will say. Bad days happen.

Castro knows that well. After graduating from Georgia Tech in 2007, he bought that brand-new Honda and piled on the miles. Scrapping for a paycheck on the mini-tours, he would drive, everywhere.

“Wow, some of the towns though,” he says now. “It was just so … small-town America.”

Which is how he began talking about Goldsboro, N.C. No offense to the citizens of that fine city, he said, but Castro and his traveling companion were so bored during a tournament there, they walked laps around Walmart to pass the time, flipping through the bins of DVDs. “There was literally nothing to do in those towns,” he says, “and you can’t stay in the hotel all day.”

There is no shortage of options on Tour, of course. Get a massage in the physiotherapy trailer. Practice on the perfectly manicured range. Work out in the state-of-the-art gym.

Or, if Castro is so inclined, he can just kick back and enjoy the sunny climates.

“The West Coast is a joke,” he said. “It’s just one vacation spot after another.”

Indeed, he is a world away from Goldsboro.