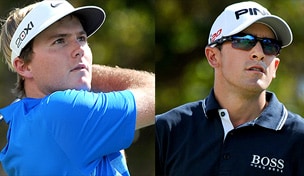 Getty Images
VIRGINIA WATER, ENGLAND - MAY 21: Colin Montgomerie of Scotland prepares to play an iron shot during the second round of the BMW PGA Championship on the West Course at Wentworth on May 21, 2010 in Virginia Water, England. (Photo by Ross Kinnaird/Getty Images)  -

HONOLULU – Scott Langley and Russell Henley joked around as if they were a couple of rookies fresh out of college.

After they set the Sony Open scoring record at 17-under 193 to share the lead, Henley walked into a news conference Saturday evening and realized Langley, who moments earlier had been sitting in the same chair, left behind his PGA Tour credentials and sunglasses.

Langley came back into the room - turns out he forgot his golf clubs, too - and Henley waved the credentials and called out to him, ''What a rookie.''

Put them on the golf course, though, and they look awfully tough to beat.

Langley relied on his stinger 3-wood on the fast fairways of Waialae and another solid round putting for a 5-under 65.

Henley took a suspect swing from the range and made it work on the course, turning a so-so round into a 67 by keeping bogeys off his card for the second straight day. He smashed a high draw on the par-5 18th over the bunker and just through the fairway, leading to a two-putt birdie that allowed him to catch Langley.

They had a three-shot lead over Tim Clark, who is finally feeling healthy again.

''I'm sure they won't be too intimidated,'' Clark said. ''That's going to be fun to see them play. There's all these young guys coming out these days, and they're ready to go right from the start. So it's going to be a fun battle.''

Langley and Henley started the Sony Open playing in the same group, not unusual because rookies are often put at the back end of the draw. They will play together Sunday for the fourth straight day, this time with a lot more at stake.

A chance to become the first rookie to win his PGA Tour debut since Garrett Willis in the 2001 Tucson.

A two-year exemption on tour.

And the sweet reward of an invitation to The Masters, rare for a rookie.

''A month ago I was at orientation, and Scott just done with Q-school, and I gave him a ride to the airport,'' Henley said. ''We had lunch and I was telling him how awesome it was I was on the PGA Tour. This is kind like a dream. It's weird. It's like I'm not awake. Very weird.''

Perhaps reality will set in Sunday, though there has been no evidence of that for three days - not the way these guys putt.

''The Vegas odds on me winning were probably not very good,'' said Langley, not a betting man himself. ''I hope somebody bet on me and I make him a lot of money.''

Langley made seven birdies to offset a pair of bogeys. Henley has been steadier, and he carries a streak of 43 holes without a bogey into the final round.

Henley looked relaxed when he finished his round and still feels as though he's playing with house money.

''Win this tournament or not, it's already been a very successful week,'' said Henley, who won twice on the Web.com Tour last year to earn his card.

''Obviously, I've played great golf, and I feel like I can compete out here. And I think when I get confidence like that, I can compete. It lets me get out of my way a little bit. It's a long year. Whatever happens tomorrow, I'm going to learn from it.''

The rookies have ruled along the shores of Oahu, and if not for Clark, it would have been even more pronounced. Clark made a birdie on the last hole that put him into the final group.

Otherwise, that spot would have been occupied by Scott Gardiner of Australia, who had a 64 and was four shots behind.

Charles Howell III, twice a runner-up at the Sony Open, had a 67 and also was four behind.

''We'll see what happens,'' Howell said. ''Those young kids are running away with it, but I'll just do my best tomorrow to have a nice week.''

Seven players were within five shots of the lead, which included Monday qualifier Danny Lee and Pat Perez, whose goal to have a more positive attitude was severely tested on the final hole when he missed a 40-inch birdie putt. Perez still had a 67 and was at 12-under 198.

Henley and Langley shared low amateur honors at Pebble Beach in the 2010 U.S. Open, and then became fast friends by flying together to Northern Ireland for the Palmer Cup. They were thrilled to be playing together for their rookie debut in the opening two rounds.

Neither had any idea they would still be together going into the final round. Nobody has been able to catch them.

''I never imagined that,'' Langley said. ''It's certainly odd. But you know, if there was a guy in the field that I would love to do it with, it would be Russell because we play pretty similar games, and we're kind of the same guy on the course. We play pretty quickly and pretty easy going, kind of feel our way around, not too technical. So there are a lot of guys that I enjoy playing with, but Russell is definitely one of them.''

He kept in front with a 7-foot par save on the 17th, but took himself out of an easy birdie chance on the 18th when his ball settled just in front of a large tree root.

In another veteran move, he took a steep swing so that the club narrowly passed over the exposed root and struck the ball cleanly, though it still left him a wedge into the green.

Those expecting to see the rookies get stage fright in the final group on the weekend quickly learned that these aren't ordinary rookies - at least not on Saturday. Both played with remarkable poise and kept this Sony Open a two-man show.

Except for John Daly, of course, who always manages to keep it interesting. He pulled his tee shot into the hill on the sixth hole, hit a rock and hurt his shoulder.

He made triple bogey, took four shots from 20 feet on the next hole for double bogey, made another triple bogey on the eighth and then holed a 50-foot birdie for a 45 on the front nine. That gave him a 79.

A far more subtle meltdown belonged to Chris Kirk. He was two shots out of the lead when he hit a tee shot into the canal on the par-5 ninth, his next shot out of bounds and made a 20-foot putt to escape with a triple bogey. He played the other par 5 much differently, chipping in from 80 feet for eagle on the 18th to salvage a 68. He was five behind.

Henley started the third round with a two-shot lead and he didn't give it up until Langley holed a 12-foot birdie from just on the fringe at the 13th. They play different styles, with Langley hitting low shots with great control, but both of them can putt.

Henley showed that with a number of par saves early on, along with his 15-foot birdie on the second hole and another birdie from about 8 feet on No. 8.

He made nine straight pars after that until his birdie on the last hole.