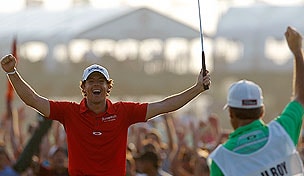 KAPALUA, Hawaii – Rory McIlroy is atop the world money list published each year in the ''Year in Professional Golf,'' the comprehensive golf annual that was started by IMG founder Mark McCormack. The list includes money earned from every golf tournament, even unofficial events such as the Father-Son Challenge and PGA Grand Slam.

Justin Rose was No. 2 with $7,897,818, even though he won only once on the PGA Tour at the WGC-Cadillac Championship at Doral. Rose also won the Turkish Airways World Golf Final, the medal-match exhibition that attracted a world-class field of eight players. Rose beat Lee Westwood in the final match to earn $1.5 million.

Rounding out the top 10 were Jason Dufner, Brandt Snedeker, Westwood, Bubba Watson and Keegan Bradley. Watson (Masters) and Bradley (WGC-Bridgestone Invitational) were the only players in the top 10 who had only one win last year.

LATE ARRIVAL TO DEATH VALLEY: Kyle Stanley grew up in Washington state and now bleeds orange after playing golf at Clemson. So imagine the surprise when he revealed Tuesday that he went to his first Clemson game this year when the Tigers played rival South Carolina.

First game this year? No, first game ever.

''I just never wanted to take a day off,'' Stanley said, who thus gave new meaning to the phrase ''strong work ethic.'' That's right – all those years at Clemson, and he was pounding golf balls on Saturday.

Safe to say Lucas Glover never fell into that trap.

As for the game?

''We're sitting up there in the stands and I started thinking, 'Man, this is kind of fun,''' Stanley said.

WILD RIDE: Jonas Blixt ended his rookie season with over $2.2 million and a win at the Frys.com Open, allowing him to start his season on Maui.

But the worst is still ahead of him.

When he played golf at Florida State, Blixt became good friends with Torstein Neavestad of Norway, and they decided a few years ago they needed to lose some weight. The deal was to eliminate soda for one year, and whoever cracked first had to ride a roller coaster uninterrupted for two hours.

Blixt hates rollers coasters, but he loves his job. So when he was going nowhere on the Nationwide Tour two years ago, he called Neavestad and conceded.

''I made 95 percent of my money that year after I started drinking Coke again,'' Blixt said.

As for the bet?

Blixt, who clasped both sides of his face at the mere mention of roller coasters, was supposed to make good during the final event of last season at Disney. Just his luck, he found out Disney wouldn't allow someone to go two hours straight, and Neavestad headed home to Norway.

DIVOTS: K.J. Choi offered to fly to Maui to take part in the Tournament of Champions pro-am because a few extra players were required to fill out the 30-man field. Korean-based Hyundai is the tournament sponsor. Jerry Kelly also is playing in the pro-am. He flew in from Wisconsin, and that much was clear Monday when he unzipped his golf bag and removed hand warmers. ... Paul Tesori, the caddie for U.S. Open champion Webb Simpson, had shoulder surgery and did not make the trip to Kapalua. Simpson instead is using Adam Hayes, who usually works for Jonathan Byrd. He has time on his hands because Byrd had surgery on his left wrist during the offseason and is not expected to return until the Florida swing. ... Rickie Fowler will hit the opening tee shot of the 2013 season, in the first group at Kapalua with Jason Dufner. In the penultimate group is Dustin Johnson and Bubba Watson, which should come in handy when Golf Channel unveils a ''yardage line'' that looks similar to the yellow first-down line in football telecasts. This will measure drives on the downhill 18th hole at Kapalua.

STAT OF THE WEEK: Americans and Europeans account for 40 of the top 50 players in the world ranking.

FINAL WORD: ''I sit here very humbled and very proud of the position I sit in here, very much so.'' – Colin Montgomerie, on being elected to the World Golf Hall of Fame.