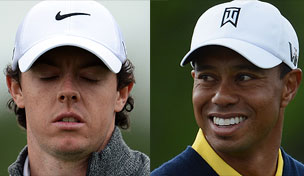 Some six hours after Rory McIlroy made news abruptly checking out for the weekend at PGA National, Woods made news finding a way to stick around.

With the galleries marching across the Champion Course almost oblivious to what was happening on the top of the leaderboard, Woods turned this tournament’s attention to the cut line. He turned all the buzz over the confusion surrounding McIlroy’s withdrawal into some drama over whether he was going to join McIlroy in an early exit from another PGA Tour event.

With brilliant saves at the 17th and 18th holes, Woods saved the weekend for tournament officials fretting over the possible exits of the world’s No. 1 and No. 2 players.

Woods might have sneaked into the weekend on the cut line, but he’ll be looking to see if he can rock this place on yet another Sunday.

Woods will bring that electric possibility back here with him when he tees it up with David Lynn at 8:15 a.m. on Saturday.

“I’ve got to get something going,” Woods said. “There are 70-plus guys within nine shots of the lead, just pretty bunched. Anybody in this tournament can win it.”

Don’t believe him? Just a year ago, Woods was nine shots back going into the final round and nearly won.

With a brilliant Sunday charge, Woods put all kinds of pressure on McIlroy, shooting 62 and getting within a shot before McIlroy closed out the victory.

“Hopefully, tomorrow, I can get it going, at least give myself a chance going into Sunday,” Woods said.

McIlroy seems to be intent on doing Woods favors in his new role as a Nike stablemate.

With McIlroy picking up his ball and walking off after plunking three shots in the water on his first nine Friday morning, there is all kinds of handwringing over the state of his game.

It wasn’t so long ago that golf seemed defined by one question: What’s wrong with Tiger Woods?

There is a new question threatening to take its place: What’s wrong with Rory McIlroy?

McIlroy fueled that question, withdrawing after pumping three balls in the water on his first nine. He fueled it assuring reporters there was nothing wrong with him physically while marching to his car. He fueled it later by releasing a statement that he was suffering from a painful wisdom tooth.

This is the third troubling exit for McIlroy since he opened the year with news trumpeting his mult-imillion dollar deal with Nike.

It follows a pair of 75s and the missed cut in his 2013 debut at Abu Dhabi. It continued with his first round bounce from the WGC-Accenture Championship last week.

While it might all prove to be just another blip on the radar for McIlroy, who endured a worse spell last year, there’s mounting pressure to prove this swoon isn’t the clubs.

Woods was asked if he could relate to the intensifying scrutiny McIlroy’s under.

“I’ve been through it a long time,” Woods said. “But, also, this is a slightly different era, as well.”

Woods was speaking of the instantaneous spread of news through Twitter and blogs.

“You’ve got to think about it more before you say something or do something,” Woods said.

Woods said he didn’t know details of how McIlroy was feeling physically, but Woods did say he understood the dilemma in trying to decide whether to withdraw in the middle of an event. Woods withdrew in the second round of the WGC-Cadillac with Achilles heel pain last year. He withdrew from The Players Championship in 2011 with pain in his left knee. He WD’d from The Players in 2010 with a neck injury.

Woods also understands the challenge of working through swing problems with it feeling as if the whole world is analyzing your every swing.

Woods managed to avoid following McIlroy out of the Honda Classic with his fight to the finish Friday. Woods shot another even-par 70 while battling along the cut line most of the day. He moved two inside the cut line with back-to-back birdies at No. 4 and No. 5, but he gave that right back with back-to-back bogeys at No. 6 and No. 7. Woods fell a shot over the cut line with a double bogey at the 13th but got himself back on the inside with a bounce-back birdie at the 14th.

Woods saved his weekend getting up-and-down for par from an awkward lie in a back bunker at 17th, and making an even better par from a sloppy, downhill lie left of the 18th green.

“I didn’t have it today,” Woods said of his swing. “But I putted well.”

Woods turned the Honda Classic on its head with his scrambling.